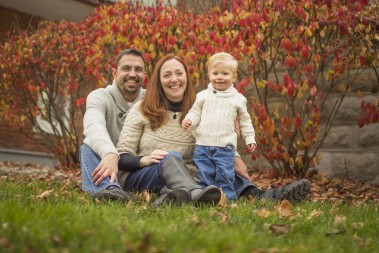 Aris and Heather Eracleous, who partnered with Catholic Charities for immigration and adoption services, pose with their son.

FORT WAYNE — Aris and Heather Eracleous have made their home in the Summit City and are thrilled to now be a family of three. Their homeland and their precious son are blessings they say, crediting immigration and adoption assistance from Catholic Charities for both.

Aris was born in Cyprus, an island country in the eastern Mediterranean Sea. He made his way to the U.S. in 1999 when he was recruited to play volleyball at Indiana University-Purdue University in Fort Wayne where he pursued a degree in computer science. Heather, a Fort Wayne native, was pursuing her career in sports marketing in Chicago.

The couple met one weekend while Heather was home visiting and soon after they began dating. Aris earned his computer science degree in 2003 and in July of that same year the two were bonded in holy matrimony. Aris then began meeting with Luz Ostrognai, Immigration Supervisor for Catholic Charities, to complete the process of becoming a legal resident.

“I was given an extra year through school to work, which afforded me the time to complete the process to become a legal resident. … She (Ostrognai) took care of everything for me. I honestly couldn’t have done it without her,” says Aris, who became an American citizen in 2011.

As a legal resident, Aris and his new wife settled into married life. Heather was raised in the Catholic Church, a life-long parishioner of St. Jude Parish in Fort Wayne. As a couple, the Eracleouses attend Mass at St. Jude and services at Holy Trinity Greek Orthodox Church as well. Heather says of their faith community, “I wanted to make sure that Aris was able to meet other Greek people in our community and we found that Holy Trinity was a great place to do this.”

Aris and Heather longed to start a family and after facing fertility issues, they began to consider adoption. Heather says, “Very early in our adoption journey we attended the Adoption Celebration in 2010 and met several agencies. …When we met Tosha (Gearhart) at Catholic Charities we felt an instant connection and knowing that we already had a past with Catholic Charities helped us feel even more at ease with the process.”

Their faith, they say, sustained them through the arduous process. “The journey or process is not an easy one. … My faith is something I leaned on through the entire process to give me strength,” says Aris.

Heather, a self-proclaimed “control freak,” has felt a deepening of her faith as she let go of her worries. “I wanted a child so badly that I had to put it in God’s hands. … He taught me to put all of my faith in His hands and trust that when the time was right, He would bless us… and He did…. at the right time, with the right child,” she says.

After working for over a year with Tosha Gearhart, Family Services Supervisor at Catholic Charities, on the adoption process, the couple decided to take a break from the emotional rollercoaster. While traveling they received a call from an attorney they had retained in the past, who knew a birth mother in labor and had chosen them for the child.

The 11-hour drive back home was the longest of the expectant couple’s lives. Miraculously, as they arrived at the Fort Wayne hospital, they discovered that the baby had not yet been born. “Our son waited for us to arrive,” says Aris, who was honored to cut his son’s umbilical cord. The couple says of the courageous birthmother, “She is an angel and gave us a gift bigger than anything we could have ever hoped or prayed for.”

She says, “I wanted a group that would share stories, offer support in certain situations and meet for lunch or coffee or a play date now and again. … The group is slowly growing.”

As for Gearhart and their affiliation with Catholic Charities, the Eracleouses say, “Tosha did our home study, updates on our home study and did our post-placement. She was extremely detail oriented and communicated with us all through the process. Not all agencies are organized or communicate well so this was just another factor in why we feel so thankful for Catholic Charities and Tosha.”

The happy little family of three stays in touch with staff at Catholic Charities, attending Adoption Celebrations each year and says, “We always go and show our support of Catholic Charities and Tosha and what they have done for us.”

Grateful for their partnership with Catholic Charities the Eracleouses highly recommend its services. “Their thoroughness and communication style has been the key factor that anyone looking for immigration or adoption services should look for and expect to receive. Catholic Charities is professional and caring,” they say.