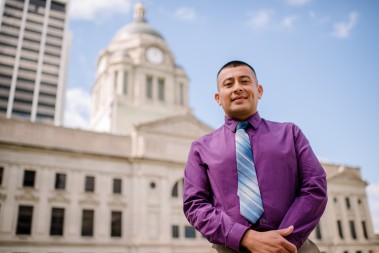 Alex Coreas poses in front of the Allen County Courthouse. He is now a Fort Wayne resident, thanks to the help of Catholic Charities.

At 18, Alex Coreas came to the United States. It was very difficult to leave his family, but under the circumstances, it was really his only hope.

His native El Salvador was in shambles. The country had been torn apart by civil war for many years. In the aftermath, his homeland descended into anarchy. Violent gangs ruled the cities and towns. They demanded “rent” for protection and terrorized the populace.

“It was getting really bad,” said Coreas. “It was common to see a dead body in the street.”

As he was coming of age in his late teens, the gangs started to recruit Coreas. But he wanted nothing to do with them, aspiring instead to raise a family and have a business career. He rebuffed their advances, a response that put him in great danger.

Then came a terrible earthquake that caused widespread damage in El Salvador. The United States came in to provide aid. For some, there was a chance to be granted a special work permit to come to the U.S. Coreas jumped at the possibility.

Visa in hand, he joined a boyhood friend who was living in Fort Wayne. He found work doing maintenance and construction jobs, always supporting himself along the way. Eventually he became a commercial carpenter, which is still his full-time job.

“There are many like Alex who come to the U.S. legally every year as refugees and asylum seekers,” said Luz Ostrognai, Coreas’ case manager at Catholic Charities. “Because these people are living in the most dire of circumstances, they typically have a great appreciation for being here.”

As the prospect of returning home diminished because of continued unrest in El Salvador, Coreas made the decision to stay in the United States and apply for his green card. Catholic Charities helped him navigate the labyrinth of red tape. With a steady work history and proficiency with English, he was granted permanent residence status.

Day by day Coreas’ appreciation for his new country grew. The freedoms and opportunities he experienced here were in such sharp contrast to the oppressive environment in his native El Salvador.

“Compared to my country, there is no hardship here,” he said. “If you work hard and play by the rules, you can get ahead.”

Ever thankful for his new lease on life, he wanted to show his appreciation for his new country by serving in the military. Once he received his green card, he became a member of the Army National Guard.

“My respect for my new country is big. It’s been 16 years, but every day I still feel a great sense of gratitude for being here.”

Coreas has served in the Guard for the last four years as a firefighter and medical first responder. Once a month, he spends a three-day weekend at Camp Atterbury in southern Indiana.

Eventually, with help of Catholic Charities, he became a U.S. citizen. Again, the staff helped him with all the paperwork.

“We see people like Alex all the time,” said Ostrognai. “They work very hard and make great contributions to our community. They are such an inspiration.”

Coreas is married and is the father of two children. He is also a homeowner, living on the south side of Fort Wayne. One of his ambitions is to build his own house, so several years ago he and his wife acquired a piece of property. He and some friends recently poured the foundation and will soon begin building the new home.

With all the opportunity Alex has realized here in the United States, his gratitude for this country and for Catholic Charities is always close at hand.

“They are extremely good people,” he said of Ostrognai and her colleagues. “They have helped me get my new life and be successful in what I do.” 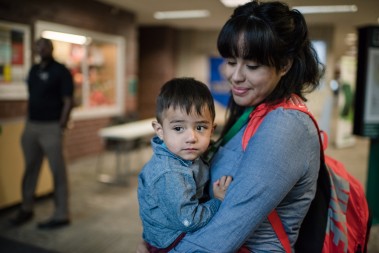 ECHO client Reyna Ramirez received the assistance she needed to continue her education in spite of a pregnancy. She is pictured with her son, Aziel.

While still in high school, 18-year-old Reyna Ramirez found herself pregnant, frightened and overwhelmed. She was living two hours away from home, with friends. Then things began to deteriorate.

She decided to return to South Bend to live with her mother. It was then that she went to the Women’s Care Center for assistance. After she decided to parent her baby, the staff referred her to the Catholic Charities ECHO Program.

ECHO, which stands for Education Creates Hope and Opportunity, is designed to help pregnant teens stay in high school and complete their diploma, all while still raising their children. ECHO also helps young mothers continue their education beyond high school up to age 24.

Like many other teen moms, Ramirez faced the possibility of having to drop out. But without a high-school diploma, she would have very poor job prospects. With the right support, however, young mothers can get the education they need to land better-paying jobs and keep their families out of poverty.

In financial terms, the Catholic Charities ECHO Program has been a great success. Moms like Ramirez have a more than 90 percent graduation rate, which compares to only 40 percent for teen moms nationally. It is estimated that every mother on assistance costs the government a minimum of $640,000 in services over her lifetime. To date, ECHO has helped more than 800 young mothers avoid poverty.

“But the program is about more than avoiding poverty,” said Ramirez’ ECHO Case Manager, Nora Bautista. “ECHO is about helping moms achieve their potential and creating a culture of human flourishing in our diocese.”

Ramirez was fearful at first about ECHO. She thought the people at Catholic Charities would look down on her for being pregnant at such a young age. What she found, instead, was a warm welcome, much-needed assistance and a very pro-life response among the staff.

Bautista first helped Ramirez with a schedule that would allow her to stay in school and still look after her son. More importantly, Bautista helped her set priorities and get organized, and helped her through the many personal difficulties she faced.

“Nora is my backbone,” she said. “She has kept me focused and is always there for me.”

Over the years, Catholic Charities has established strong working relationships with high schools in Fort Wayne, South Bend and elsewhere in the diocese. Those professional relationships are vital to the success of the program because they help ECHO case managers achieve a consensus on the plan for the student among faculty, staff and parents, and carry out the plan.
Thanks to ECHO Ramirez graduated on time, but she had no plans for continuing her education beyond high school. Bautista once again stepped in and helped her investigate career possibilities. Ramirez decided she wanted to do something in the medical field, so Bautista helped coordinate her search for possible programs. She also helped Ramirez with the scholarships and financial aid necessary to pursue her goal. Eventually Ramirez decided on Ivy Tech Community College, where she enrolled in September.

Ramirez credits Bautista with helping her organize and prioritize her life so she can continue her studies and raise her son. More importantly, she feels that advancing her education will help her stay out of poverty and provide the life she wants for her family.

“To be able to have my son in my arms and provide him with a stable family — that was life changing,” said Ramirez.

Consider supporting the ECHO program by sponsoring a teen mother and her child as she completes her education. For information, call 260-422-5625. 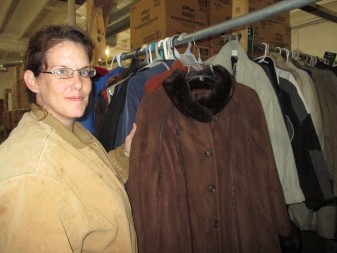 For more than 10 years, the Catholic Charities RSVP office in Auburn has offered free winter garments to those in need. Each year the organization passes out nearly 2,000 coats, hats, scarves, gloves and mittens to area residents.

“There is no income test to qualify for a coat,” said Site Director Patti Sheppard. “We only ask that the person fill out a form for our records.”

Sheppard noted that requests come from many types of people, including those who have been recently released from jail and those who are living at the local homeless shelter and are in need of a decent coat to wear to a job interview. There is also the occasional pregnant woman who has outgrown her coat. Whatever the circumstances, the office is generally deluged with requests about the time of the first significant snowfall.

Each year the drive begins with barrels located in front of Kroger stores in Auburn and Kendallville. The Downtown Auburn Business Association also collects warm outer garments through drop-off points at PNC Bank, Peekers and the Atrium Market Place. McKinney Harrison Elementary School did a coat drive this year, as did the local Knights of Columbus from Immaculate Conception parish.

The drive is publicized by word of mouth and through United Way offices in DeKalb, Noble, Steuben and LaGrange counties.

“We even have school-crossing guards who get involved,” said Sheppard. “They notice which children are walking to school without proper clothing and then pass out items to them when they see them next.”

This year the DeKalb County Community Foundation supported the drive through its Voice Grants. Thanks to these grants, high school kids from DeKalb County receive money and decide on how to spend it on winter garments and other items for the agency’s food pantry.

Clothing donations are accepted year-round. Donated items may be dropped off at the Catholic Charities RSVP office in Auburn, located at 107 W. Fifth St.

For those in need, items may be picked up on Monday afternoons from 4:30-6:30 p.m., on Tuesday mornings from 9:30-11:30 a.m. and Wednesday afternoons from 1:30-3:30 p.m. Winter jackets and accessories will be given out through the end of January. Most all sizes are available, and items are distributed on a first-come-first-served basis.

Anyone with questions is invited to call the RSVP office at 260-925-0917. Volunteers from Catholic Charities are available to deliver items if transportation is unavailable to the recipient.