FORT WAYNE (CNS) — The head of the Vatican’s justice, peace and human development efforts urged over 700 graduates of the University of Saint Francis to follow the example of their school’s namesake and the advice of the pope who shares his name.

“Consider what impact you make in life,” said Ghanaian Cardinal Peter Turkson, prefect of the Dicastery for Promoting Integral Human Development. He urged graduates to be “sowers of hope” in his May 1 address at the commencement ceremony at the Allen County War Memorial Coliseum in Fort Wayne.

“Impact provokes change and makes beneficiaries of this change full of hope for the future,” he told the graduating class. He also noted how St. Francis of Assisi, in his poverty, found the means to impact all things.

“With no master but Christ and no possession but his own soul, Francis was free to relate to all things and all people,” said Cardinal Turkson. He added that for the saint, “the only real relationship available for human beings to live in is the relationship of brothers and sisters, equal in dignity.” 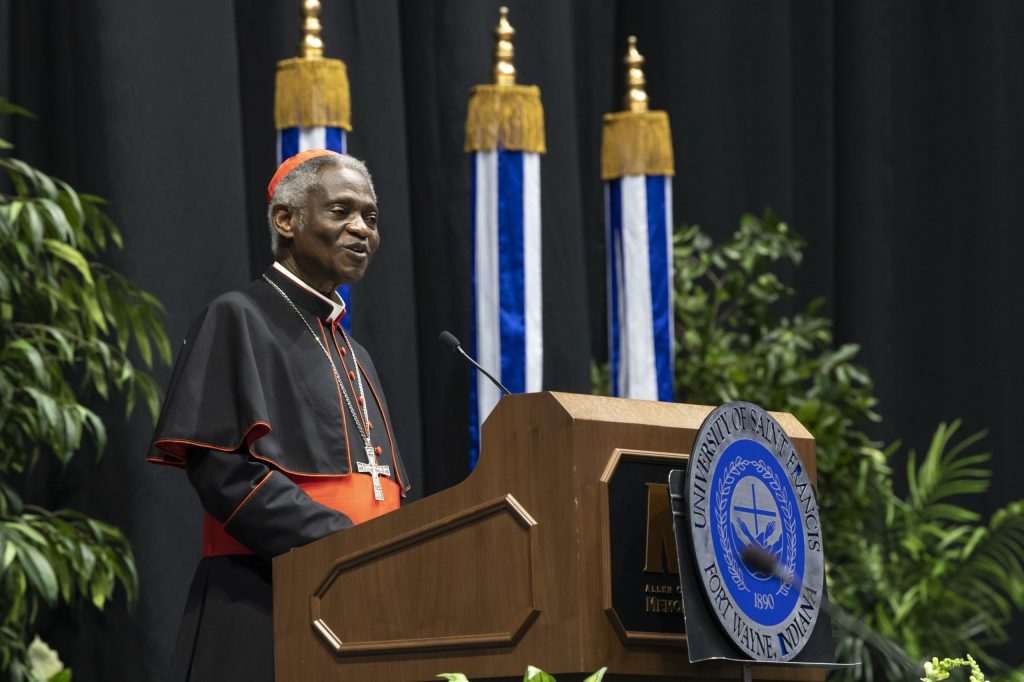 BFA Commercial Photography
Cardinal Peter K.A. Turkson, prefect of the Vatican Dicastery for Promoting Integral Human Development, addresses 2020 and 2021 graduates of the University of Saint Francis in Fort Wayne during commencement exercises May 1 at the Allen County War Memorial Coliseum.

Cardinal Turkson, 72, has led the Dicastery for Promoting Integral Human Development since it was restructured out of the Pontifical Council for Justice and Peace in 2016, which Pope Benedict XVI named him to in 2009. St. John Paul II made him in a cardinal in 2003.

Encouraging graduates to use their impact on the world as the indicator of their success, the cardinal offered examples of Church leaders such as St. Paul VI in 1969 voicing concern for the development of every human being and Pope Francis in 2014 urging the World Economic Forum to adopt economic models driven by inclusion and the common good.

He also drew at length from the pope’s remarks to young people from 115 countries at a virtual, Assisi-based conference held last November, where Pope Francis characterized the pandemic as an opportunity for discernment of how to transform society.

“He wanted them to become the protagonists of a new economic and a new social order — to serve people, and not people reduced to serving money,” the cardinal said. “He exhorted them to regenerate economic order and a new culture.”

Cardinal Turkson and the university’s former president, Franciscan Sister Elise Kriss, received honorary degrees at the ceremony, which marked the first major gathering for the University of St. Francis since the pandemic’s start, as well as the first commencement for the university’s new president, Father Eric Albert Zimmer.

Nearly 50 members of the class of 2020, whose commencement was canceled due to the pandemic, also participated.

While the cardinal has ties to Holy Cross College at Notre Dame and has worked with Notre Dame’s Mendoza School of Business on days of reflection for CEOs and other leaders of fuel industries, this was his first visit to the Fort Wayne-based university founded in 1890 by the Sisters of St. Francis of Perpetual Adoration.

“I told my students in the Catholic social teaching course that he was coming,” said Franciscan Sister Jacinta Krecek, chairman of philosophy and theology, who used the occasion for her students to delve into the efforts and issues led by the cardinal’s dicastery. “And three of the class are graduating today, so they were ready for his arrival.”

“It’s nice that we have such an obvious Franciscan connection … and on such a crucial issue,” said theology professor Adam A.J. DeVille on Cardinal Turkson’s widely credited role as drafter of the pope’s 2015 encyclical on care for the environment, “Laudato Si’.”

“It’s incredible having a cardinal here. Being a Catholic institution and to have someone from the Vatican come and speak, I think that we’re very blessed,” said theology professor T. Alexander Giltner.

Cardinal Turkson’s office has also led the Vatican’s COVID-19 commission, which has coordinated with the church in over 50 countries, providing support where possible, and — in the Vatican’s capacity as a state — has engaged in multilateral talks to advocate for inclusive vaccine distribution that doesn’t leave poor countries behind. 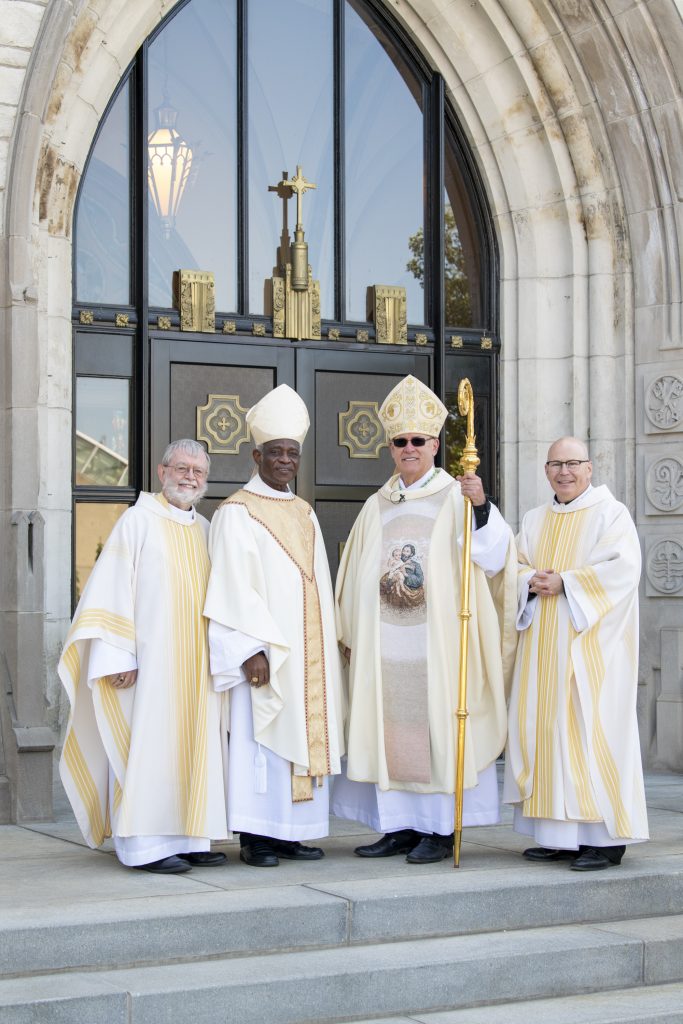 BFA Commercial Photography
A baccalaureate Mass was celebrated for 2020 and 2021 graduates of the University of Saint Francis, Fort Wayne, by Bishop Kevin C. Rhoades Saturday, May 1. Concelebrating the Mass were, from left, university chaplain Father John Sheehan, SJ; Cardinal Peter K.A. Turkson, prefect of the Vatican’s Dicastery for Promoting Human Integral Development; and right, Father Eric A. Zimmer, president of the university.

Citing Pope Francis in his address, the cardinal said the pandemic “started as a health care issue, but it has also exposed a lot of other social issues: the fragility and unsustainability of a lot of our social structures.”

Speaking to media prior to the ceremony, he addressed the Vatican’s concern that as many people as possible get vaccinated, in order to end the pandemic.

But ultimately, he said, personal freedom has to acknowledge moral responsibility.

He also emphasized that the decision to be vaccinated against COVID-19 “has an impact and a responsibility toward your neighbor and those you live with.”

Read about the Baccalaureate Mass.