The weather was fair and sunny, and even a chilly breeze did not seem to cloud the spirits of those attending a baccalaureate Mass for the 2021 graduating class of the University of Saint Francis on the morning of May 1 at the Cathedral of the Immaculate Conception, Fort Wayne. Bishop Kevin C. Rhoades presided at the Mass, congratulating the graduates and commending them for starting their graduation day in the right manner: by giving thanks to God for the gifts and talents that He gave each of them. Cardinal Peter Turkson, university president Father Eric Zimmer and university chaplain Father John Sheehan, SJ, concelebrated the Mass. 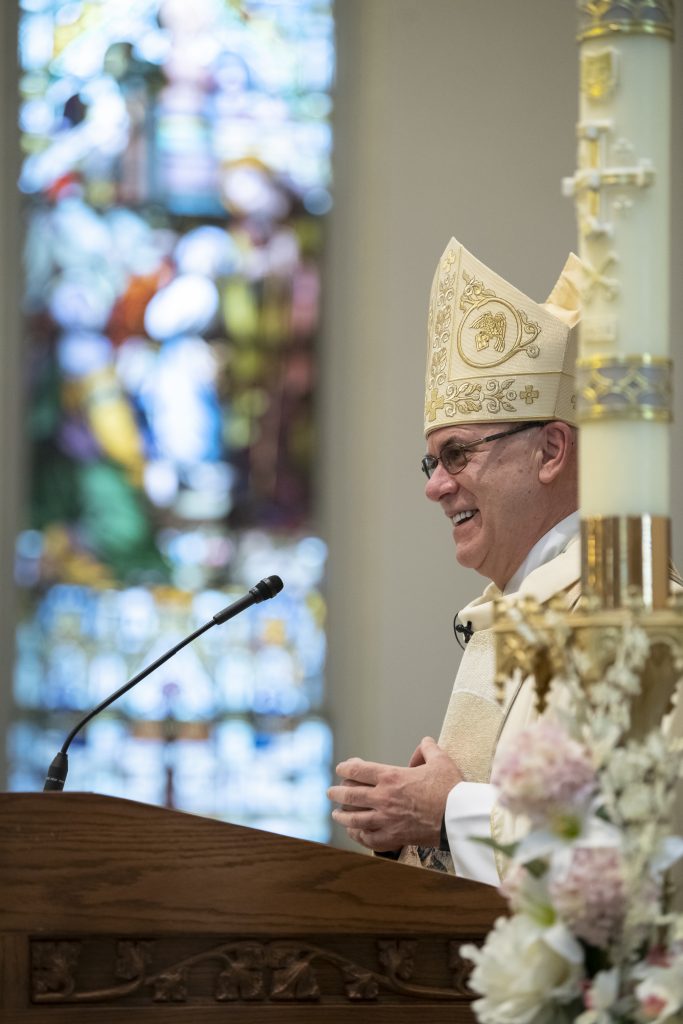 BFA Commercial Photography A baccalaureate Mass was celebrated for 2020 and 2021 graduates of the University of Saint Francis, Fort Wayne, by Bishop Kevin C. Rhoades Saturday, May 1.

A selection of Saint Francis faculty led the procession into the cathedral, including many Franciscan sisters and Sister Elise Kriss, OSF, the university’s former president, followed by the ecclesiastical procession.

As he began the Mass, Bishop Rhoades welcomed Cardinal Turkson, originally from the African nation of Ghana. Cardinal Turkson is Prefect of the Dicastery for the Promotion of Integral Human Development.

The bishop noted in his homily that the day was significant because it was the feast of St. Joseph the Worker, and those who would be awarded their degrees would certainly be preparing to enter the workforce.

“Whatever your plans are, I invite you to reflect on the meaning of work and to see it as part of your vocation from God. We can learn from the example of St. Joseph the Worker,” the bishop said.

He continued by stating how the Gospel readings referred to Jesus as “the carpenter’s son,” and that Joseph, and by extension Jesus, performed a simple trade and worked with their hands. “Maybe some of you graduates will work with your hands, maybe not in manual labor, but maybe with your hands on a computer. St. Joseph worked with wood and made furniture. He shows us the importance of human work of whatever kind.” 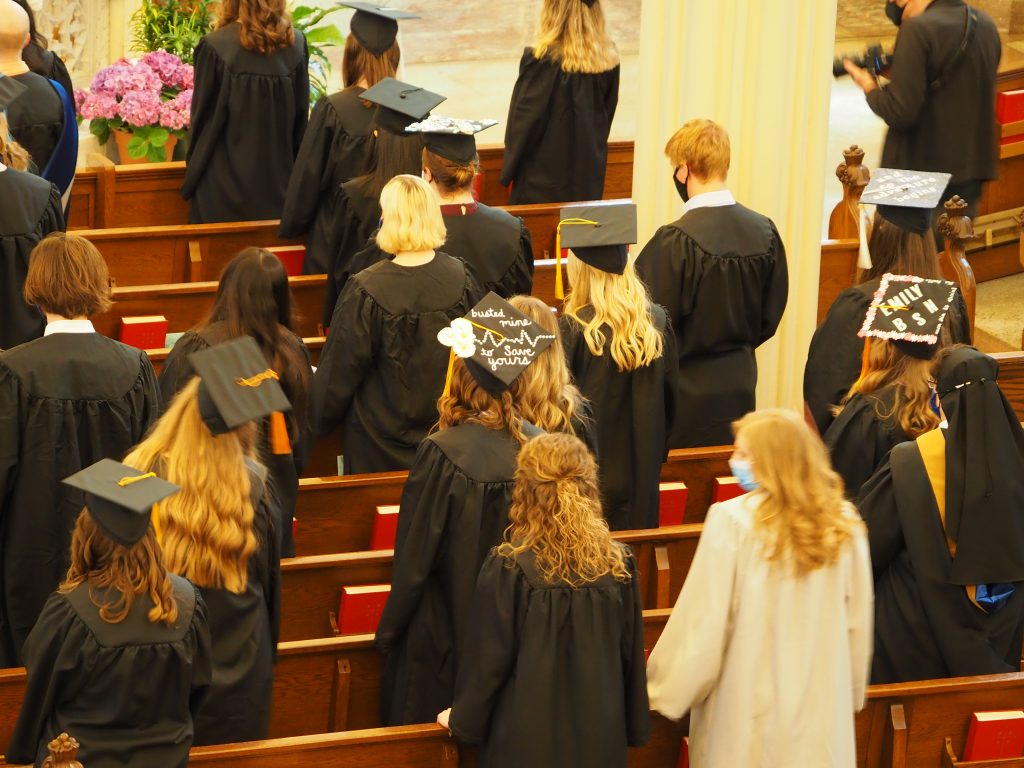 Reminding the new graduates that God created work to be a part of life, he encouraged them to remember that work is an opportunity to move toward holiness, as it was for St. Joseph. “He did his work for the glory of God and for the love of his family. St. Joseph shows us that all the work we do can be for the glory of God and the good of others. I encourage you, in whatever work you will do, to do it with the same goal.”

He went on to relay the story of a young man he had confirmed in Pennsylvania who earned his degree from the University of Notre Dame. This young man, he stated, began to work for a big finance company in New York and made a great deal of money in only a couple of short years. However, he also found himself drawn further and further away from his loved ones and, most importantly, God. “He was becoming materially rich but was becoming poor in what really matters in human life. Thankfully, he saw what was happening and he quit his job.”

That young man went on to co-found an app that has become well-known and greatly popular throughout the Catholic world – Hallow. “His life changed for the better. … He had learned that work is for life and that life is not for work,” Bishop Rhoades remarked.

“Graduates, I pray you never lose sight of the higher goods of life, of the values you have learned at the University of Saint Francis, the values exemplified in the life of St. Francis of Assisi, and the values that St. Joseph teaches us. Don’t focus on earthly treasures that pass away or settle for a soft and easy life of self-indulgence. Store up for yourselves treasures in heaven by using your gifts for service of God and others, with devotion to the common good, including the care of creation. Take with you as you graduate the ideals and values of your Christian faith, the ideals and values that will give your life and your work meaning and true happiness.” 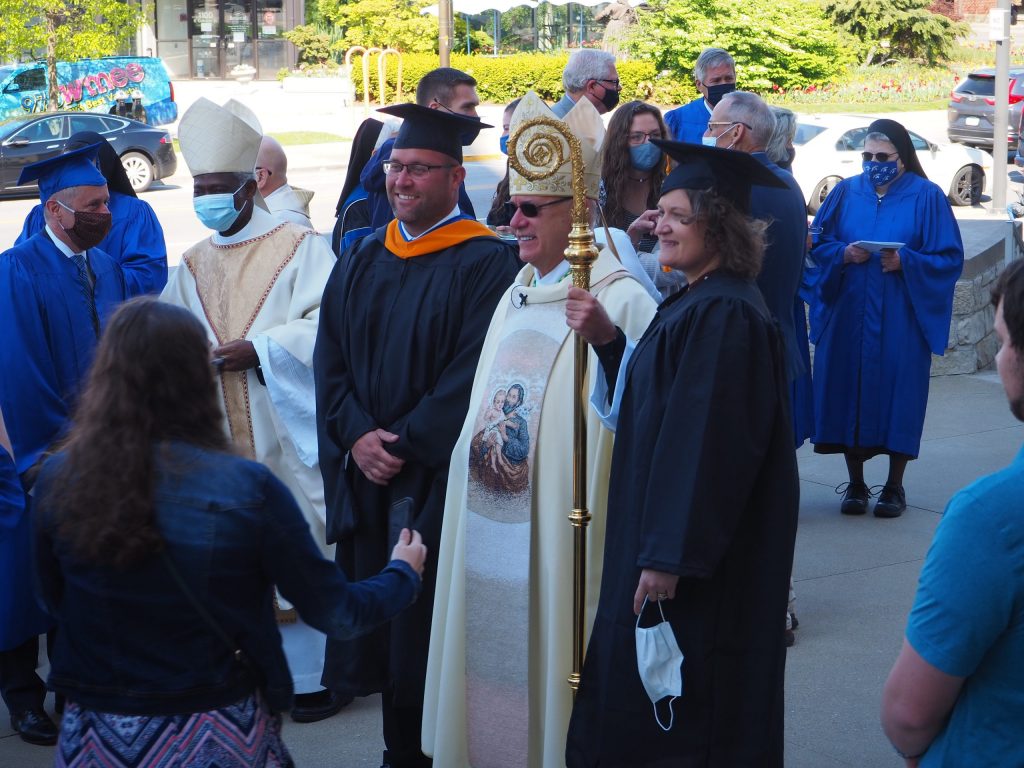 Afterward, several attendees commented on the beauty of the Mass and many of the graduates and family members took advantage of the fair weather to greet Bishop Rhoades and Cardinal Turkson outside before heading to the commencement ceremony.

Read about the graduation ceremony.