FORT WAYNE — A travel weary but exuberant Bishop Kevin C. Rhoades, who disembarked from his 21-hour trip home from Rome Saturday, Feb. 18, appeared pleased to find a welcome home party anxiously awaiting his return. Led by almost a dozen students from Bishop Dwenger High School, replete with a welcome home sign, a band of diocesan parishioners and local media gathered to usher the bishop back home.

A press conference was held at the Fort Wayne International Airport where the bishop’s flight had landed to address not only the highlights of his 10-day “ad limina” visit to Vatican City, but to clarify the Church’s position on the recent mandate on female contraception issued recently by the Department of Health and Human Services (HHS) and its subsequent “accommodation” for Catholic institutions.

Bishop Rhoades began the conference by distributing rosaries and holy cards blessed by Pope Benedict XVI to the delight of all the students present. He told those congregated that this trip was his first “ad limina” visit with Pope Benedict as a bishop, though he said he had met the pope on previous occasions.

The “ad limina” visit, which occurs every five years, is an obligation of diocesan bishops, following the tradition of St. Paul’s visits to St. Peter, the first pope of the Catholic Church. He spoke of the three purposes of the visit that included meeting with the Holy Father, praying at the tombs of Sts. Peter and Paul and meeting with officials of the dicasteries or departments of the Roman Curia.

Bishop Rhoades, accompanied by Bishop John M. D’Arcy, bishop emeritus of the Diocese of Fort Wayne-South Bend, joined close to 30 bishops from Wisconsin, Illinois and Indiana. The pope, he said, held meetings for each of the three U.S. states, during which he met with each bishop individually and then as a group.

“We each got to greet him and speak with him a little bit privately. But then as a group he called on each of us to tell him about whatever we wanted to talk about. … So I talked about our Catholic schools, I talked about the diocese, and our Catholic universities and vocations. … What was interesting was he asked me a number of questions. He didn’t do that with the other bishops — I don’t know why,” chuckled Bishop Rhoades, adding that the pope was so gentle and kind that he put everyone at ease.

At the end of his meeting with the Holy Father, Bishop Rhoades said the pope gave the bishops a blessing and blessed all the people of this diocese and specifically mentioned the youth here.

In addition to celebrating Mass together in a variety of Roman basilicas, each day the bishops visited the various dicasteries employing the bishops and cardinals in Rome, who he said, received them with warmth. He mentioned, as chair of the U.S. Bishops’ Committee on Laity, Marriage, Family Life and Youth, he gave a presentation on the state of the institution of marriage in the U.S. and the challenges of family life the country faces.

Bishop Rhoades found it interesting that Catholics in Western Europe face similar challenges with the secular culture, but also some of the same hopes for the future with the new evangelization that Pope Benedict encourages.

Bishop Rhoades commented on the fraternity with the other bishops during the trip, saying, “It was a great opportunity to get the know the other bishops of the region.” And the bishop, who had lived in Rome for seven years as a student, was pleased to visit some of his favorite places and eat “a lot of great pasta,” in his free time.

During the question-answer period, Bishop Rhoades proclaimed that he felt renewed in his episcopal ministry “especially feeling supported and uplifted by Pope Benedict and my brother bishops and all the officials at the Vatican.”

He said he looks forward to the new Year of Faith declared by the pope, which begins in October, and has many ideas on how to celebrate as a diocese.

“We need a reinvigoration of the faith. … We need to be able to present the faith with new vigor, new energy, new methods and expressions. And I feel that’s going to be my priority,” he said. 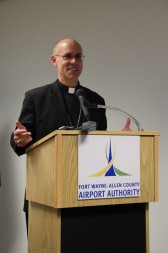 Bishop Kevin C Rhoades speaks to local parishioners and students of the diocese along with Fort Wayne area media at a press conference held Feb. 18 at the Fort Wayne International Airport following his 10-day “ad limina” visit to Rome. The bishop spoke about his visit with the Holy Father as well as addressing the mandate issued recently by the Obama administration on female contraception that violates religious liberty.

The exchange then switched to the topic of religious liberty, conscience rights and the mandate issued recently by HHS.

Bishop Rhoades was clear that the Church must remain strong in the fight against the contraception and abortive health care mandate. He said the “accommodation” the Obama administration set forth following the concentrated reaction did in no way change the fundamental issues, such as non-exemption for Catholic institutions and services.

He went on to include the individual in this mandate, saying, “This isn’t just about the Church as an institution. What about people of faith who believe in their conscience that some of these things are wrong? If they are employers, they should not be forced to provide health insurance for their employees that includes these things they find objectionable. … And employees as well.”

He said the larger issue of violation of religious liberty is critical and that the Vatican supports the U.S. bishops’ stand.

Bishop Rhoades believes that the next step in the fight for religious liberties and conscience rights is the legislative route, backing the “Respect for Rights of Conscience Act” both in the House of Representatives and the Senate.

Bishop Rhoades said, “Contacting our congressman and our senators and really working hard,” is the current call. He also believes that for a substantial change to occur the judicial branch of the government might have to be included.

What can parishioners around the diocese do to join the fight for religious freedom? “I call upon the people to pray, because I do believe in the power of prayer,” said Bishop Rhoades, who cautioned that religious liberty is not simply about freedom to worship, but also to “live our faith in the public square.”

“Make this an important issue when they’re voting,” instructed Bishop Rhoades, adding, “and when they’re electing those who are running for office on whatever level, state or federal levels, especially. We have to keep this before the public.”

Following a blessing on those gathered the bishop spoke privately with the media reiterating that “health care is regarding sickness or disease. Pregnancy is not a disease.” Contraception, though readily available, is not part of the Catholic Church’s belief in natural conception and birth.

Commenting on the “accommodation” the administration offered, the bishop said there was no change in the mandate because the Catholic institutions are paying the premiums for the coverage even when the insurance companies take responsibility for mandate. But if the legislature fails to enact the conscience rights act, Bishop Rhoades feels optimistic that the Supreme Court system will overturn the mandate.