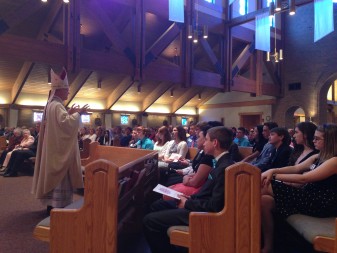 GRANGER — “The Church needs your energy and enthusiasm to bear witness to Christ!” Bishop Kevin C. Rhoades passionately emphasized these words of mission to the seventh-and-eighth grade Confirmation candidates from St. Pius X Church on May 3-4.

Bishop Rhoades continued, “We are called to be missionary disciples; to be moved and transformed by the gifts of the Holy Spirit, to grow closer to Christ and become His courageous apostles in the world today.”

The class of nearly 150 students, representing South Bend’s largest parish, was confirmed this weekend in two separate Masses. Students from St. Pius X School received Confirmation at the Saturday evening Mass, while the religious education and homeschool students were confirmed on Sunday afternoon.

Bishop Rhoades warmly greeted those preparing for Confirmation using imagery from the Sunday Gospel passage, recounting the story of the disciples on their way to Emmaus. “We are pilgrims on a journey, and we do not walk on that journey alone,” Bishop Rhoades said. “Jesus walks with us! Even when we are sad, even if we are depressed or discouraged, and even if we do not recognize Him, Jesus is present with us and invites us to know Him more deeply, especially through the Mass.”

The disciples who encountered Christ that day heard the Scriptures revealed to them and were included in Eucharistic fellowship. Upon seeing Him break the bread, their eyes were opened to His presence in their midst, and they became inspired to return at once to Jerusalem and speak of what they had just experienced.

Bishop Rhoades spoke of the similar possibilities in the Church today.

“In every Mass, we have the Scriptures to guide us and we are witnesses of Jesus’ body and blood being broken and poured out for us,” he said. “Every time we are present at the Holy Mass, we become travelers with Christ on the journey to Emmaus.”

Bishop Rhoades further elaborated on the Scripture readings in light of the importance of the Holy Spirit coming more fully into the lives of those receiving Confirmation. “In both the Gospel passage and through the words of St. Peter in his homily on the first Pentecost, we see the gifts of the Holy Spirit lived out as an example for us,” he said. “We are called to conduct ourselves with reverence and piety, to be open to the wisdom and counsel of the Holy Spirit, to pray that we may be able to know and understand the will of God, and to live courageously in the example of the saints.”

As part of his Confirmation homily, the bishop also asked some students questions about their chosen names and how the sacrament calls them to transform the world through virtuous action. In particular, Bishop Rhoades spoke with seventh-grader Gabriel Davey and eighth-grader Nathaniel Gerwels about their connections to the saints they chose to identify with.

Davey, who took the name Thérèse (of Lisieux), revealed that he was first introduced to her by Father Daniel Scheidt, the current pastor of St. Vincent de Paul in Fort Wayne, when he brought him a statue of her during a dinner about three years ago. He shared, “Father Dan told me she would follow and look after me if I trusted in her. Since then I have felt her presence and protection and have often seen signs of roses appear throughout my life.”

St. Thérèse was known for having a great love of roses, which are often seen as the signature of her intercession upon those who look to her for aid.

Gerwels shared with Bishop Rhoades that he chose the Confirmation name Paul because of the tremendous influence Paul had on the early Church and for leading so many people to Christ after experiencing his conversion.

Bishop Rhoades congratulated both Gerwels and Davey for knowing detailed information about their new patron saints, and quipped they would be receiving applications for the diocesan Priesthood after they graduate high school.

Gerwels shared that he had been thinking about the Priesthood since sixthgrade and would consider it more seriously now after receiving a personal invitation from the bishop.

Bishop Rhoades took time at the end of Mass to thank those who had dedicated significant time and effort to making the Confirmation a success and also encouraged that the work of the Holy Spirit continue in the lives of the young students. He recognized the sponsors of each candidate for bearing such great witness to the faith, commended the parents and grandparents who serve as the primary educators in faith to lead their children on the path to eternal life, thanked the teachers and catechists who offered their service to prepare the young men and women well and stated how joyfully proud he was of those who became confirmed and now undertake a greater responsibility in leading holy lives of their own.

A reception followed after each Mass, where students were able to speak with Bishop Rhoades and take pictures with him. Each of the confirmed young men and women were also given a YOUCAT, the youth edition of the Catechism of the Catholic Church that was recently given to each of the pilgrims who attended World Youth Day.

Dan Allen, the director of religious education for St. Pius X shared that “each student was given a YOUCAT as a sign from their parish to remind them that although Confirmation classes are over, the Church still wants them to stay active in their faith. And this provides a good resource for this to occur in a way that reaches them in their own language.”