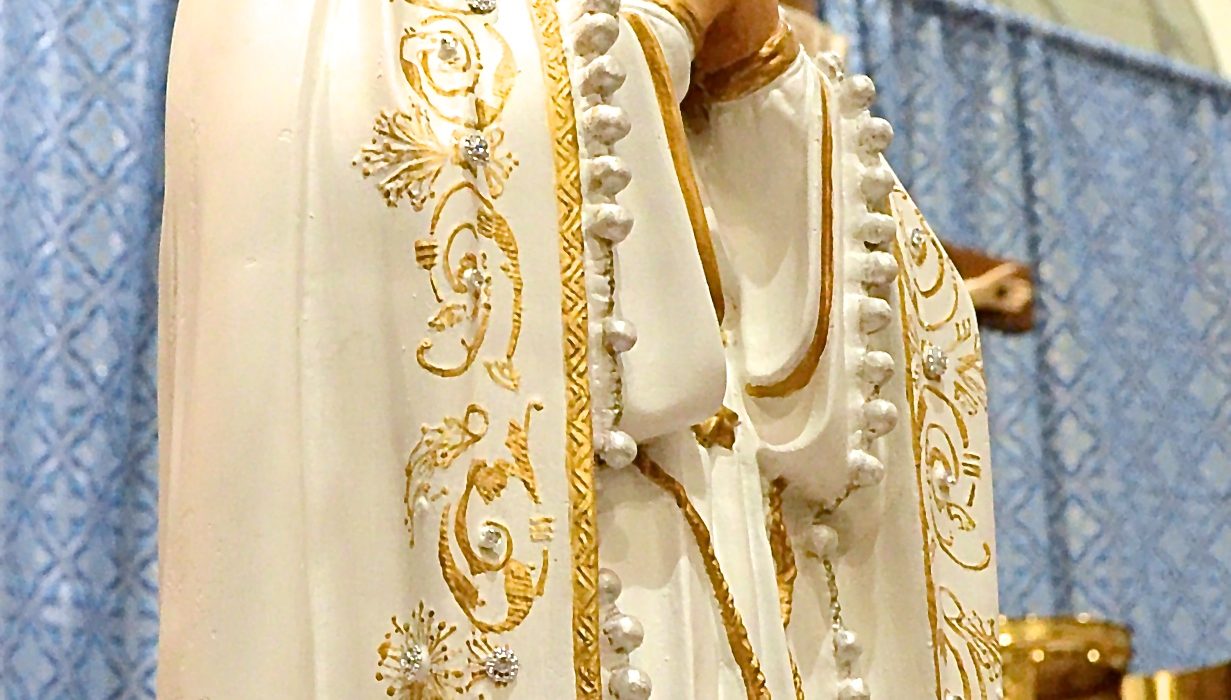 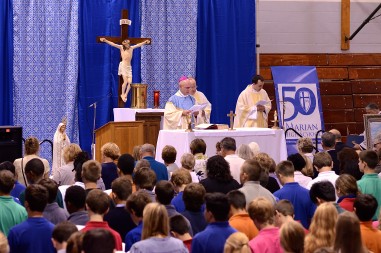 Bishop Kevin C. Rhoades celebrates Mass on Thursday, Sept. 4, in honor of the 50th anniversary of Marian High School in Mishawaka. Shown with Bishop Rhoades are Benedictine Father Jonathan Fassero, a graduate of the Class of 1968, the first graduating class from the school, and Father Christopher Lapp, right, chaplain at Marian High School.

MISHAWAKA — “Put out into the deep!” announced Bishop Kevin C. Rhoades to the Marian High School community during their golden anniversary Mass on Sept. 4. This joyous occasion commemorated the completion of the endeavor undertaken by the sixth bishop of the Diocese of Fort Wayne-South Bend, Bishop Leo A. Pursley, to construct a second Catholic high school to serve the needs of the South Bend and Mishawaka area in 1964.

Present for this special Mass were Benedictine Father Jonathan Fassero, a member of the first graduating class of 1968 from Marian, and Msgr. Michael Heintz, rector of St. Matthew Cathedral and a 1985 graduate. Also in attendance were priests from St. Jude, St. Anthony de Padua, St. Bavo, St. Matthew and St. Thomas Parishes, as well as priests and brothers of the Conventual Franciscans, based in Mishawaka.

Faith is about trusting Jesus. The bishop noted, “Jesus comes to the shores of our life, Pope Francis says, ‘He makes Himself close to our failures, our frailty and our sins in order to transform them.’”

“Put out into the deep,” Bishop Rhoades said, “means to be docile and obedient to the words of Jesus. With Jesus, everything changes in our life. He fills our nets. He satisfies our deepest desires.”

“We let Him into our boats, into our lives, and we put out into the deep with Him,” Bishop Rhoades said.

“To put out into the deep is to go out of ourselves and our own small world, and open ourselves to God and what He can do,” the bishop added.

“When we go out of ourselves toward God and toward others, we open our hearts to friendship and to solidarity,” he said. “We too become fishers of men. We witness joyfully to the Gospel. When we journey with Jesus, we put out into the deep. We do good things, help others and build a better world.”

The founders of Marian High School shared this vision to lead students to Christ, even though initially they faced challenges and setbacks, Bishop Rhoades related in a historical account of the school.

The bishop was able to move forward with Marian High School because of a very generous gift — a donation of over 36 acres of land for the construction of the facility from the Sisters of St. Francis of Perpetual Adoration. Those in attendance offered their support and gratitude for the heartfelt generosity of the sisters.

Although the school was initially set to open in 1963, weather-related delays pushed the opening to the fall of 1964. Bishop Pursley blessed the cornerstone of the school on Aug. 9, and then, on Sept. 4, the school opened with its first class with 230 freshmen, some of whom were present at the 50th anniversary Mass.

At its origins, Marian was almost completely staffed by Salvatorian priests and brothers from Wisconsin, and the Sisters of St. Francis of Perpetual Adoration.

Since then, the school has cast its net to help cultivate the minds and hearts of thousands of students.

“For 50 years, Marian has provided excellent Catholic education to students from throughout Mishawaka, South Bend, Elkhart and the surrounding area.” Bishop Rhoades said. “Marian High School has a proud half-century of history, but I think of the history yet to be made. You are part of that history. I encourage you, students, faculty, staff and friends, to put out into the deep, to trust in the word of Jesus like Peter did, and you will have a great catch.”

Bishop Rhoades also prayed for the school community to become further entrusted to Our Lady of Lourdes, the recently declared Marian patron of the school, “so that she who was never afraid to put out into the deep, as the most perfect disciple of her Son, may continue to intercede for you in your holy mission here at Marian High School,” the bishop said.

Before the conclusion of the Mass, school officials presented Bishop Rhoades with a unique painting of St. Mother Theodore Guérin, Indiana’s lone canonized saint, as a gift to the diocese.  The portrait was a combined effort by Marian art teacher Kitty Gunty and former student Sara Holderbaum, who have consistently strived to use their artistic talents to give back to both Marian High School and the diocesan community.

Those in attendance from the original class were offered a tour through the school to explore new additions, old favorite places, and to meet current faculty and students. The celebration was a warmly received tribute by all in attendance and it called to mind past memories of happiness and hospitality.

John Ferrettie, who graduated with the original class in 1968 and served as a teacher, coach and assistant principal during his tenure, shared the joy of his experiences and gratitude at having been at Marian. “I have so many memories as a student and staff member here. This has been such a wonderful community,” he said. “I really look back to the people here and relationships I have had with them. Some of the best years of my adult life were spent at Marian.”

Cyril Devliegher, principal from 1972-82, remarked that he “took over during a period of uncertainty and transition, which was also the state of the Church as a whole after Vatican II. But by having as our primary goals to remain optimistic, to uphold fiscal responsibility and to promote orthodoxy theology, the school began to thrive and eventually grew into the flourishing community we have today.”

Current Principal Mark Kirzeder remarked, “It’s great to have the bishop’s support. It’s a confirmation that he understands and appreciates that Marian High School continues to contribute within diocese. This school is only successful if we remain true to the teachings of Jesus Christ, and I think that we really are trying to do that on a daily basis with our students. We are always trying to live by example, to refocus our energies and all of our programs to constantly reevaluate whether we really are fulfilling our proclaimed mission to spread the Gospel to make Christ known, loved and served. I feel as long as we are doing that, then the Lord will continue to bless us here for the next 50 years.”

MISHAWAKA — In 1962, the Sisters of St. Francis of Perpetual Adoration, donated a 36-acre site located directly south of their convent, Mount Alverno, to establish a new Catholic high school in the South Bend-Mishawaka-Elkhart area.

After two years of planning and construction, and with a cost of $1.9 million, the class of 1968 entered the doors on Tuesday, Sept. 8, 1964 to start their freshmen year. The first freshmen class consisted of 131 boys and 108 girls. Each year another class was added until there were four grades and the school was full. That first class celebrated the first Marian graduation in 1968.

The Marian Knights donned school colors of blue and silver, which were voted on by the student body the first week of school. The students started their day at 8:40 a.m. Each class was 50 minutes long and their day ended at 3:56 p.m. Mass was held in the cafeteria. The boys took up three classrooms on one side of the building, the girls in three classrooms on the other side. They did not have any mixed classes until the first class became seniors.

Bishop Leo A. Pursley chose priests and brothers of the Salvatorian Order and Sisters of St. Francis to administer and staff the classrooms. Father Donald Verhagen served as the first principal. One lay teacher, Bob Otolski, also served as the football coach.

Otolski recalled that first season fondly, “I remember August 1964 very well. It was very hot and the school was not done. There was dust and dirt everywhere. I brought the borrowed football equipment we got from Indiana University back to Marian on a trailer.”

“We not only had to use borrowed equipment, but we did not have practice facilities,” Otolski said. “Our first team practice was held in a cornfield across from the school. Our first game was against South Bend Central.”

“Our opponents came with a cross between ridicule and pity,” he said. “They didn’t know whether to laugh at us or feel sorry for us. We were so new. But we had the last laugh as much to their surprise we won that first game, 7-6. Marian began its winning tradition with that first team of young men from every possible type of family.”

“I have very strong ties to Marian,” Otolski said. “It is a time I will never forget, and I am proud to have been there at the beginning. That first pioneer group had a tremendous sense of spirit. Marian has never lost that spirit.”

That first year the football team consisted of a 33-man squad led by Dave Dhoore. The defeat of South Bend Central was witnessed by 3,000 fans, a testament to the support the Marian community had. The team would go on to an 8-1-1 record — quite a remarkable feat for a first-year program. In addition to football, Marian had a successful basketball season with a 14-7 record. Though there was no baseball, wrestling, golf or crosscountry, the school did have a track team in the spring.

The pride and determination that was shown by those first teams have been a motivation for subsequent teams. An unknown 1968 graduate gave this quote, “As you can see, we are proud, very proud. Proud of what we are, and what we will be. What records we set this year we are proud of. We will even be prouder of the athletes who will follow us, breaking the tape a second or so quicker, because they will have inherited the desire to play, win and claim the victory with honor and undying spirit — a tradition which we, the first graduating class of Marian High School have begun.”

When asked what the students would consider the strength of Marian High School Principal Mark Kirzeder, who became the school’s new principal in July, told Today’s Catholic, “Primarily, I believe our students would view Marian as a place where people, faculty and staff alike, will care about and love them as individuals created by God.”

He noted, “Often I see students return to see a favorite teacher or staff member to say thank you for the gifts of faith, love, understanding or compassion that were given many years earlier. These gifts, more often than knowledge of a specific content, are what students tend to be most grateful for.”

Referring to the Marian community, Principal Kirzeder called it an ever-growing family.

“We pride ourselves on the close personal relationships that all members of our community experience,” he said. “It is with the support, prayers and help of the entire Marian family, that we endeavor to provide an education that is not only rigorous, but rooted in the rich tradition of our Catholic faith.”

“All members of the Marian faculty are passionate about the subjects they teach, dedicated to the mission of providing Catholic education to all students that walk through our doors, and committed to making God known, loved and served in this life, so that we can all be with Him in the next,” he said.