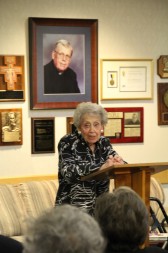 Betty Stein, recipient of the Father Tom O’Connor Light of Christ Award, shares remarks about Father O’Connor. The two had collaborated on many projects, particularly mentioned was the Jewish-Catholic dialogue. Father O’Connor’s photo is shown in the background.

FORT WAYNE — Betty E. Stein, noted for her community work in education — both inside and outside the classroom — has been named the recipient of the 2014 Father Tom O’Connor Light of Christ Award. Bishop Kevin C. Rhoades presented the award to Stein, Friday, March 21, at St. Mary Catholic Church, the parish that presents the award in cooperation with the Diocese of Fort Wayne-South Bend.

The Father Tom Light of Christ Award is presented annually to persons of faith whose life and work reflect the values of Father O’Connor, who served as pastor of St. Mary’s from 1970 until his death on St. Patrick’s Day, 2004.

This is the first time a person from the Jewish faith has been the recipient of the award.

“This gives me special joy especially since our honoree has been a beautiful example and proponent of strong and close relations between our Jewish and Catholic communities in Fort Wayne,” said Bishop Rhoades in his remarks at the award ceremony. “We give thanks today for God’s goodness, the goodness shown to so many through the life, work and service of Ms. Betty Stein.”

“We are pleased to be acknowledging the many contributions to our community of the incomparable Betty Stein,” said Father Phillip Widmann, pastor of St. Mary Parish. “Father O’Connor is considered by many to be an icon of Catholic faith in action. … For Father Tom feeding the hungry was a matter of justice, not charity.”

Bishop Rhoades spoke of the years he lived in Italy and while visiting Milan, he went to the famous opera house, La Scala. He noted that he heard that Stein, who enjoys the opera immensely, once sang on the stage of La Scala.

Stein planned to donate her $1,000 award money to a grand opera performance by the Heartland Chamber Chorale for middle school students at Memorial Park Middle School in Fort Wayne. This year, thanks to the grant, the students will have another opportunity “to learn about real music,” Stein quipped in her remarks.

Stein said she had the privilege of knowing Father Tom O’Connor and worked on projects with him, particularly the Jewish-Catholic dialogue. She said of Father O’Connor, “His intellect, his sincerity, his goodness were omnipresent. If you knew him, you knew that there was a twinkle in his eye. (He had a) delightful sense of humor that helped resolve rather difficult situations.” 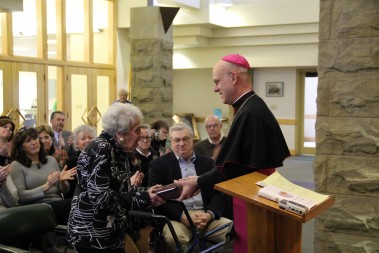 Bishop Kevin C. Rhoades presents the Father Tom O’Connor Light of Christ Award to Betty Stein for her community work in education, both inside and outside the classroom.

She called the St. Mary’s Soup Kitchen a marvelous gift to the community. “This was a man who knew what was needed and did his darnedest to see that it was taken care of.”

Stein said of the award, “I cannot tell you how grateful I am.”

Stein told Today’s Catholic that she had a heart for working with underprivileged children “whose home life was not what one wanted it to be.”

Betty Edlavitch Stein was born Dec. 10, 1916. Her father was a physician who was concerned about racial equality. The family’s roots were in Baltimore, Md., and on trips east, she was “horrified by the difference between life there and here (in Fort Wayne) — the segregation. It just didn’t seem right,” she said.

A Fort Wayne native, she is a graduate of Central High School, earned her bachelor of science degree from Ohio State University in social work, and later completed a master’s degree in education at the University of Saint Francis. Stein taught English and social studies at Fairfield Junior High, eventually becoming chair of both departments, and then became curriculum coordinator at Memorial Park Middle School. She officially retired in 1981, but started that same year as a consultant with Fort Wayne Community Schools — a position that she continues to enjoy to this day.

During her days in the classroom, Stein was exceptionally popular with her students, consistently finding time to provide extra help to those who needed additional academic encouragement or who simply needed to talk. And she was always available to her teaching colleagues — many of whom to this day regard her as their mentor.

She frequently volunteered when a principal needed someone to plan a field trip or write a grant application for a special project such as providing opera experiences for middle school youngsters.

Stein also writes two regular columns for the Fort Wayne News-Sentinel as well as an occasional feature story and, in the opinion of her two children — John M. Stein and Rena Black — is the most voracious reader they have ever seen. One of the newspaper columns she writes highlights what area residents are currently reading.

She has never stopped teaching those who come into contact with her, through her columns, her volunteer work and through her amazing intellect that always pinpoints exactly what needs to be said or done.

Under the umbrella of the Fort Wayne Jewish Federation, Stein created the award-winning Minority Literature Project — a much-needed effort to introduce the work of African American and other minority poets to students when textbooks and anthologies at that time did not include their work.

Her previous awards include, among many others, The Esther Ritz Collyer Award for lifetime achievement in fine arts education, Sagamore of the Wabash, Tapestry Award, Goldie DuBow Award of the Fort Wayne Jewish Federation, and the Excellence in Education Award, presented to her by Fort Wayne Mayor Tom Henry for her lifetime of service to the community.