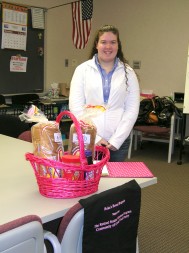 AUBURN — When Rebekah Graber entered her junior year in 2008 at Canterbury School, Fort Wayne, she was rushed to complete her yearly, mandatory volunteer hours so she could play volleyball. Her decision is still helping provide a vital staple to those in need in DeKalb County.

Graber tried several volunteer projects, such as tutoring and working with the GED program. But since her mom, Janelle, worked with Catholic Charities’ Auburn Community Service Center with the Retired Senior Volunteer Program (RSVP) Food Pantry serving DeKalb County, she decided to volunteer her services there.

Before she started, Graber admits to “being a little uppity” and “kind of full of herself.” She finally realized “there were many people in the community in need of help in so many ways,” she related. “And when the economy got really hit that need increased. It made me realize there was more to the world than just my little bubble. That was really huge for me, not just as a person, but to understand my future,” she continued. “And even when my community service hours were done I kept going back,” she said.

“Those times are some of my best memories,” she mused. At 16 years old, she was the youngest in the program consisting mostly of 50 and 60 year olds. Even though there was a big age gap, Graber said she has always worked well with older people, enjoying hearing their stories and experiences, or just getting to talk with them.

Graber would meet with clients initially, registering them by getting their phone numbers and other details before food items were distributed.

She continued to work at RSVP through her junior and senior years. But it didn’t take her long to notice they were constantly running out of bread. Living at home with her parents, there always was at least two loaves of bread in the house. It was taken for granted, but soon she realized “bread is expensive!”

“A lot of children rely on having peanut butter and jelly sandwiches; even for college students, it’s a staple,” she emphasized. “For the Food Pantry to not always have bread just tugged at my heart,” she stressed. “I couldn’t wrap my head around why they always didn’t have it!”

“I wanted to create a lasting endowment to allow the Food Pantry to buy bread and not have it come out of their expenses, and to be a gift so other people could enjoy this staple. I wanted the children to be fed. And, I wanted something to be lasting in the community for a while and not be a one-time thing that’s forgotten,” she said.

Graber first met with Wendy Oberland with the DeKalb County Creative Foundation for Auburn who was very receptive of Graber’s endowment idea. The plan was to begin with $500 gifts, which could be given with a one-time payment or spread out over five years. Armed with a list of supporters, which included Wendy and her parents, she next met with the late Gloria Fink, an avid community supporter, to present the idea. Graber was acquainted with her, she said — their cats “exchanged” Christmas cards — but she was nervous about asking for an initial gift of $5,000 within a few months. To Graber’s surprise, she was given the check on the spot!

“That gave me a huge boost because I knew I was doing the right thing,” Graber said.

Next she met with people at her church, First Christian Disciples of Christ. After explaining the workings of the endowment to them from the pulpit, the congregation pledged an additional $5,000 by the end of the day.

Graber did her part that first summer often rising at 6 a.m. to make and sell double-chocolate cookies for $1 each at the farmer’s market and donating half of her proceeds to the fund. She also did some babysitting and contributed 35 percent of her earnings.

The name “Beca’s Bread Brigade” came from a “tinkering session” with her mom, who said they needed to come up with an alliteration to make the campaign easier to remember.

After graduating from high school, Graber attended Calvin College, Grand Rapids, Michigan, earning a bachelor’s degree majoring in English writing with a minor in chemistry. With her love of both writing and chemistry, her ideal job someday would be to do the technical writing for the information packaged with most medicines and prescriptions. “The things nobody reads,” she quipped.

Graber lives with her parents in Auburn and has one older brother, Daniel. She works in patient access at DeKalb Hospital as well as on the switchboard. She’s still taking classes in the continuing education program at Indiana University-Purdue University, Fort Wayne, “for the fun of it,” she said. When she has time Graber visits the Food Pantry with a sack of food. The last time she checked, the endowment had reached more than $46,000.