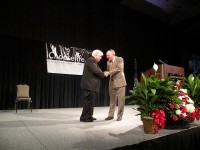 The Telemachus award recognizes a person who advocates for life like the 4th-century monk who was killed protesting the senseless slaughter of gladiators in the Roman forum. Each year it is bestowed on a person who contributes in a special way to the pro-life cause. Since his installation as the eighth bishop of the Diocese of Fort Wayne-South Bend in 1985, “Bishop D’Arcy has been a wonderful advocate for life. … He has touched many lives here on earth and for eternity while defended the most vulnerable among us,” noted the evening’s program.

Wenthe went on to express his admiration for Bishop D’Arcy as a faithful shepherd to his flock, as one who sets a high bar for priestly vocations and as one who holds truth and charity together.

In accepting the award Bishop D’Arcy returned the compliment. “We hold the Lutheran community in admiration and respect,” he replied. He went on to note that the late Pope John Paul II spoke of a dangerous crisis of moral sense and lack of a distinction between good and evil. Attacks on life at its beginning and at its end are widespread, he said. We must choose life.

Another award presented for the first time this year was the Daniel Award for Excellence in Pro-Life Public Policy.

Named for the Old Testament figure who followed God’s will in his role as the king’s counselor and president without regard for his personal safety, the Daniel Award recognizes a public official who invests his political influence for the cause of life.

The award was granted to Allen County Commissioner Nelson Peters for his work as standard bearer for the Patient Safety Ordinance, which was enacted into county law after a fierce legal battle. The ordinance requires out-of-state physicians to provide their own contact information and the name of a local physician who will treat their post-surgery patients in case of emergency. In presenting the award, state Sen. David Long cited Peters’ “courageous and determined leadership.”

Keynote speaker for the evening was U.S. 6th District Congressman Mike Pence who was first elected in 2000 and recently won a fifth term to represent much of eastern Indiana. He describes himself as “a Christian, a conservative and a Republican, in that order,” according to the evening’s program.

He remarked upon taking the stage and facing the nearly 900 in attendance, “It is obvious that Fort Wayne is united for life.”

Cathie Humbarger, executive director of Allen County Right to Life, summed up the past year’s victories. Fifteen churches have joined the third annual 40 Days for Life Campaign, 1,500 area residents attended the local March for Life, 150 area students traveled to Washington D.C. for the National March for Life, 90 attended the sixth annual Friends for Life camp, and most importantly, surgical abortions dropped by 31 percent in Allen County in the past year, she said.

The theme of this year’s banquet was “Uniting Our City for Life.” It was hosted by Dr. and Mrs. Marvin Eastlund, Dr. and Mrs. Phil Tyndall, Three Rivers Educational Trust Fund and the Allen County Right to Life.

The hosts said, “Our hope is this evening will indeed bring all of us together with a single focus to eliminate the acceptance and practice of abortion in our community. We deeply appreciate your interest and involvement in presenting the truth about abortion and your unfailing support for life instead of death … we are challenged and inspired by those who are carrying the torch in this struggle to preserve the incredible gift of life that God has given each of us.”

Humbarger’s vision for the future echoes that sentiment and builds on the victories. She would like to make Fort Wayne the largest city in Indiana that is abortion-free.