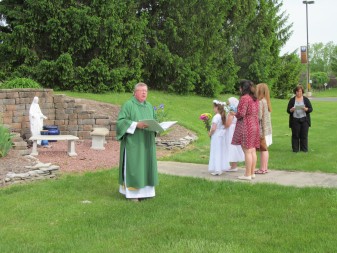 On May 20, St. Elizabeth Ann Seton Catholic School held its first all-school May Crowning — a Catholic tradition of honoring Mary, the mother of Jesus Christ, in the month of May. Leading the prayer service was Deacon Jim Kitchens. The entire school processed to the grotto of Mary. A court of second graders Felicity Smuts and Julia Spoltman who recently celebrated their first Communion, and eighth graders Alyssa Barnum and Veronica Wrobleski, who recently celebrated their confirmation, led the procession, offered flowers and placed a festive crown on the statue of Mary.

Suzanne Wiwi to retire after 32 years of service and 27 at the helm of St. Joseph School

SOUTH BEND — After 32 years of devoting herself as both teacher and principal at St. Joseph Grade School, Suzanne Wiwi is set to retire on June 30.

Wiwi, a lifelong member of St. Joseph Parish and an alumna of the school, began teaching in the Diocese of Fort Wayne-South Bend in 1984, and has 45 years in the field of education. St. Joseph School witnessed significant growth during her tenure. When she became principal in 1989, 190 students were enrolled. Today, the school serves over 450 students in kindergarten through eighth grade.

Founded in 1854 by Holy Cross priest Father Edward Sorin, St. Joseph School is an educational ministry of St. Joseph Church of the Diocese of Fort Wayne-South Bend. In its 162-year history, the school has educated the hearts and minds of generations of children from South Bend and the surrounding area.

Wiwi is responsible for implementing numerous educational and faith-enrichment programs and initiatives, both within the school and beyond. She started the Young Authors’ Conference for area Catholic schools, resurrected the local intra-Catholic school spelling bee, and formed the school’s Family Groups program as a mechanism to promote a spirit of community across grade levels while furthering the school’s mission through shared activities that center around making God known, loved and served. 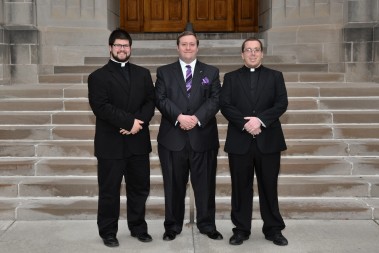 The Pontifical College Josephinum held its 117th Commencement Exercises on Saturday, May 14. The students from the Diocese of Fort Wayne-South Bend who received Bachelor of Arts, Philosophy degrees are from left, Daniel Koehl, Justin Meenagh and Cody Martin.

“I never anticipated that I would become a principal of a Catholic elementary school. What I did know is that I wanted to make a difference in the lives of the children I teach. It has been a blessing to be a part of a community of people who have worked so hard to help St. Joseph School become what it is today. I have faculty, staff, and parents who have worked diligently and given so much of themselves for our children in order to provide what they need to be successful, while always reinforcing the importance of our faith,” said Wiwi.

The parish hosted a celebration beginning with Mass at noon on May 22, at St. Joseph Church, to honor Wiwi’s dedication, faith and service to this community. After Mass, there was a short presentation in the church, followed by an open house in Fanelli Hall attended by friends, family and well-wishers.

FORT WAYNE — National Endowment for the Arts Chairman Jane Chu has approved more than $82 million to fund local arts projects and partnerships in the NEA’s second major funding announcement for fiscal year 2016. The NEA chairman has approved the University of Saint Francis (USF) for a grant in the amount of $15,000 for its Jesters program.

The Art Works category supports the creation of work and presentation of both new and existing work, lifelong learning in the arts and public engagement with the arts through 13 arts disciplines or fields.

“The arts are all around us, enhancing our lives in ways both subtle and obvious, expected and unexpected,” said Chu. “Supporting projects like the one from the University of Saint Francis offers more opportunities to engage in the arts every day.”

The University of Saint Francis Jesters group has provided meaningful multidisciplinary performing-arts opportunities to children, youth and adults with mild to severe intellectual/ developmental disabilities (ID/DD) since 1978. During the funding period the existing program will be enhanced, and new components will be developed including: expanded opportunities for people with ID/DD to participate in Jesters; development opportunities for those who want to learn more about effectively engaging people with ID/DD in arts activities; paid student art internships, to include four to six people with ID/DD; support/training to organizations interested in replicating the program.

FORT WAYNE — Catholic Charities will be hosting a workshop titled “Learning the Proper Steps of Immigration and Citizenship” from 8:30 a.m. until 3:30 p.m. on Thursday, June 2, in the Archbishop Noll Catholic Center, 915 S. Clinton St.

The class will feature presentations from U.S. Citizenship and Immigration Services, The Catholic Legal Immigration Network, Inc. and immigration specialists from Catholic Charities of the Diocese of Fort Wayne-South Bend.

This event will be hosted by Catholic Charities’ Immigration Department and will include a welcome address from Bishop Kevin C. Rhoades.

Registration can be completed online at Eventbrite.com.  Cost is $35 per attendee, lunch will be provided.  Registration is open to any interested individuals. Substantial information will be presented for agencies and organizations who work on the immigration and naturalization process for applicants.