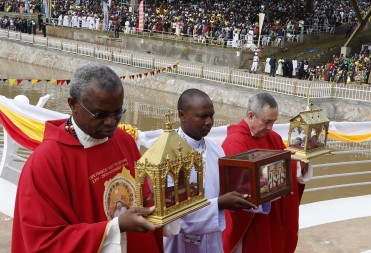 Relics of the Ugandan martyrs are carried in procession at the start of Pope Francis’ celebration of Mass for the martyrs of Uganda near the Catholic shrine at Namugongo in Kampala, Uganda Nov. 28, 2015.

ARCOLA — Each year Msgr. Thadeus Balinda, pastor at St. Patrick Parish, Arcola, makes a trip to his native Uganda, in east Africa. The two weeks in his home country are generally spent relaxing and visiting family and friends. But this year his vacation was highlighted by Pope Francis’ papal trip to Uganda at precisely the same time. The pope also visited Kenya and the Central African Republic during his first official trip to Africa.

Pope Francis’ papal visit was a “big blessing” and both the African government and the public were well prepared for the pope’s arrival, said Msgr. Balinda. A national holiday was declared in Uganda so that pilgrims could make the long and arduous journey to see him. Hundreds of thousands converged near the Uganda Martyrs Shrine in Namugongo, just outside the Ugandan capital of Kampala where Pope Francis offered Mass on Saturday, Nov. 28, 2015.

The Uganda Martyrs Shrine is dedicated to a group of Christians who were murdered on the orders of a local king who wanted to thwart the spread of Christianity in the late 19th century. The 22 African Catholics who were persecuted were canonized by Pope Paul VI in 1964 and the entire past year has been a golden jubilee celebration of that event, capped off by the pope’s visit.

“We invited the pope to celebrate with us the 50 years since the canonization of the Uganda Martyrs. This is a top priority for which he accepted our invitation,” said Archbishop John Baptist Odama, the head of the conference of local bishops in Uganda, according to the Catholic Herald in a Nov. 24 story. Ugandan President Yoweri Museveni said in a news release, “The pope’s compassion for the poor and his frankness of spirit is an encouragement to all of us who live in the light and stand for the causes that matter to humanity.”

Msgr. Balinda said that so many priests were invited to participate that they had to be separated into two groups, but he was fortunate enough to be part of the group at the Uganda Martyrs Shrine, which he called “special to us.” Though he had to walk two miles to the site due to the heavy traffic, he said that was a short distance compared to the thousands who walked for days to see the pope and to worship at the shrine.

“I’m a lucky priest,” said Msgr. Balinda. His bishop, Bishop Robert Muhiirwa, pastor of Fort Portal, Uganda, had sent him to study in Rome in 1986, and he saw the pope frequently at his outdoor audiences. Then he was the only priest from Uganda ordained in 1993 when Pope John Paul II came to the country. But “it’s exciting. This is a new pope,” he said of Pope Francis. “Witnessing Christ in him is quite special.”

“Uganda is a lucky country,” too, said Msgr. Balinda, because it has hosted three popes. Pope Paul VI visited in 1969, Pope John Paul II came in 1993 and now Pope Francis has made it the middle stop on his first African trip. It was a blessing from God for the Ugandan people, who are very proud of their faith. There are “many priests, many religious, many faithful,” he said, and fully 48 percent of the population is Catholic.

Uganda has been victim to religious violence in the form of terrorist attacks claimed by the Shabab, a militant Islamist group. Many were killed in bombings in 2010, claimed to be acts of revenge against Ugandan troops who have been part of the African peacekeeping force in Somalia.

But the pope’s message centered on his signature themes of concern for the poor and the need for greater dialogue between adherents of different religions, not on the need for political or social change. His was a message of hope for the future of the African people.

Upon his return to St. Patrick’s Parish, Msgr. Balinda said his message to his own parishioners is the same as that which Pope Francis brought to his native Uganda. It is the message of Christ, a message of hope and a beautiful witness to the Gospel of Christ.

SOUTH BEND — From growing up across the street from Our Lady of Hungary Church in South Bend in the 1940s to currently serving as papal nuncio to Uganda, Archbishop Michael Blume has always lived in community with the Roman Catholic Church. His life has been blessed with inspirational and fascinating moments, from joining the Divine Word Missionaries to planning Pope Francis’ recent papal visit to Uganda.

Raised by loving parents, taught by the Daughters of Divine Charity, the eldest of three, Archbishop Blume grew up in “a culture that supported vocations. There was the idea that people can make decisions before they are 30. The Catholic culture in Uganda today resembles what I grew up in.” The archbishop joined a minor seminary at 14 and was ordained to the Priesthood in 1972.

Three years later, “Evangelii Nuntiandi” came out and “I ate it up,” the archbishop recalled, smiling. The words by Pope Paul VI echoed in the archbishop’s heart and resonated with his living experience in Ghana. He has served in a variety of fascinating offices, currently as papal nuncio to Uganda. Since February 2013, he has been serving as the pope’s “ambassador” to the predominantly Catholic East African country.

Remembering the 50th anniversary of the canonization of the Uganda martyrs was the main focus of Pope Francis’ visit to Uganda. Both Pope Francis and Archbishop Blume in meeting found a “a uniqueness of the holy martyrs.”

“I could not imagine Uganda without the martyrs,” Archbishop Blume said. “It would be a very different country. They have shaped the whole history of the Church there.” And there is a very particular thing about the martyrs too — that is the group that died in 1886: 46 martyrs — 22 were Catholic and 24 were Anglican.

The site of their martyrdom, Namugongo, near Kampala, immediately became a place of prayer and pilgrimage.

“In your veins the blood of martyrs flows,” the pope told the young people when he visited. “That is why your faith is so strong.”

“The Holy Father essentially followed their route of martyrdom when visiting Uganda. The first place he went was Munyonyo, where the martyrs were first condemned and tied and marched off together,” Archbishop Blume said.

Next he visited the Anglican Shrine and Catholic Shrine. The latter is built over the site of St. Charles Lwanga’s grave, a tree to which he was tied and burned. Immediately news of his martyrdom spread and it became a place of devotion, other people came looking for his ashes.

Preparations for the papal visit began about five months before, with five advanced teams from the Vatican visiting, meeting with government and Church authorities. “You deal with the realities of the time that is available and the realities of what human beings can endure,” Archbishop Blume explained of the organizing.

Pope Francis, “had incredible stamina,” Archbishop Blume noted. “You could see he was tired; but when he was with people, he was just energized!”

Archbishop Blume, who had visited the pope’s pilgrimage sites in the past, said what surprised him was what “happened when you put people there. It just changes. It is another experience. And people are waiting for Pope Francis … and then Pope Francis comes! It is electrifying!”

Archbishop Blume traveled with Pope Francis in Uganda, as well as hosting him. The pope received many thoughtful gifts, including a goat (which he contributed to the local community) and two cakes decorated with his favorite soccer team and a pizza pie.

Mission was the pope’s central message. “From the very beginning, the Church has a great example in Charles Lwanga and his companions,” Archbishop Blume said. “At the same time, this is not a memory, which is to be kept in a museum. But the same Holy Spirit, which worked in Charles Lwanga and his companions, is at work in us today. And the Church is made not by closing in on ourselves but by mission.” The pope repeated that message in a number of ways throughout the visit.

Outside of Africa, the pope reminded people of their responsibility to evangelize. He explained this evangelization as “a dynamic movement that carries us out of ourselves.” Archbishop Blume explained this means “reaching out, going beyond what is familiar, whether that is in one’s own home or diocese. Perhaps the Lord is asking me to maybe make a contribution in another country.”

When discerning such things, Archbishop Blume remembered Pope Francis’ words to religious and the clergy: “Always keep looking for ‘Where are the challenges?’ If you look for that, you will not settle down.”

For readers local to South Bend, Archbishop Blume connected the themes. “In the context of the Year of Mercy, looking out for all of those places for people who need to experience the mercy of God. You look outside, all around us. This is not exclusively a priestly function, not the domain of simply the religious. Everybody is called to that. Your next-door neighbor who has the flu and maybe needs a bit of help to do the dishes is a person in need of mercy. There are countless cases like that. Where is a person in need of mercy? You can find them in Uganda or you can also find it here (in South Bend). It is just a question of opening up our eyes, right? And going out.”