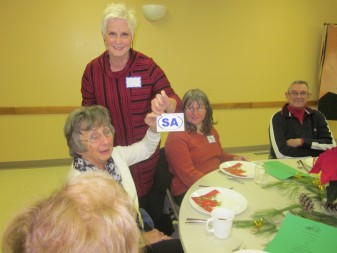 ANGOLA — Teens, adults and families from St. Anthony of Padua Church in Angola came together during Season 3 of ARISE Together in Christ, forming 18 faith-sharing groups with over 180 participants. The focus this session involved learning more about Catholic social teaching and putting the work of social justice into action.

Anne Ferguson, the ARISE coordinator at St. Anthony Parish, told Today’s Catholic that in response to the call for social justice, several actions were undertaken.

“One group, determined to help combat the ‘culture of death’ that seems to come with drugs, decided to speak with government officials about supporting a law that makes pseudo-ephedrine (used in the making of crystal meth) into a drug requiring a prescription,” Ferguson said.

Several families passed out cards with parish Mass times as a thank you at Halloween. Other groups gave monetary donations to Compassionate Pregnancy to honor life. Another contributed to a missionary trip to Haiti, accompanied by a group prayer.

“Many groups contributed tangible goods, including nonperishable food to the Knights of Columbus’s food bank, paper products and cleaning supplies to the TLC (Transitional Living Center for women and children),” Ferguson noted, and gave “socks, towels and personal products to the Turning Point Homeless shelter and clothing to a needy student.”

One small-faith group of ladies delivered a fully cooked Thanksgiving dinner to the TLC house on Wednesday prior to Thanksgiving, and delivered a turkey and other staples for a family in need.

Ferguson said, “Another gave ‘God’s Word Among Us’ to our RCIA members to grow in Catholic teachings, knowledge of God and their faith.”

One lady from a small-faith sharing group designed and the group purchased and donated St. Anthony car decals to the parish.

Raking leaves for the homebound was a project another group chose.

“In the Christmas spirit,” Ferguson added, “groups combined to purchase big ticket items for needy families, and another group planned to send Christmas cards to service men and women with a religious card, prayer or Bible verse enclosed.”

Many participants from ARISE are continuing to give their time, talents and treasure toward creating a Live Drive-Thru Nativity on the parish grounds on Sunday, Dec. 15, from 4-8 p.m. at 700 W. Maumee St.  The event will feature candle-lit biblical scenes with actors, music and live animals.

A Mass of Thanksgiving concluded the season and was celebrated by the pastor, Conventual Franciscan Father Fred Pasche, on Tuesday, Dec. 3. During the offertory procession, nonperishable food was brought to the altar for those in need.

A social gathering followed with appetizers, comic relief by the parochial vicar, Conventual Franciscan Father Bernie Zajdel and the kick off to “Catholicism: The New Evangelization,” a new DVD series by Father Robert Barron to begin January.