More than 50 adults were fully received into the Catholic Church May 30 and June 12 as Bishop Kevin C. Rhoades confirmed them in Fort Wayne and South Bend, completing their sacraments of initiation. Masses of confirmation of adults are celebrated every year in the diocese for Catholics who have not previously received the sacrament.

The Masses took place at St. Peter Church, with 24 adults receiving the sacrament; the number was higher at St. Patrick Church, South Bend, with 34 candidates in attendance. 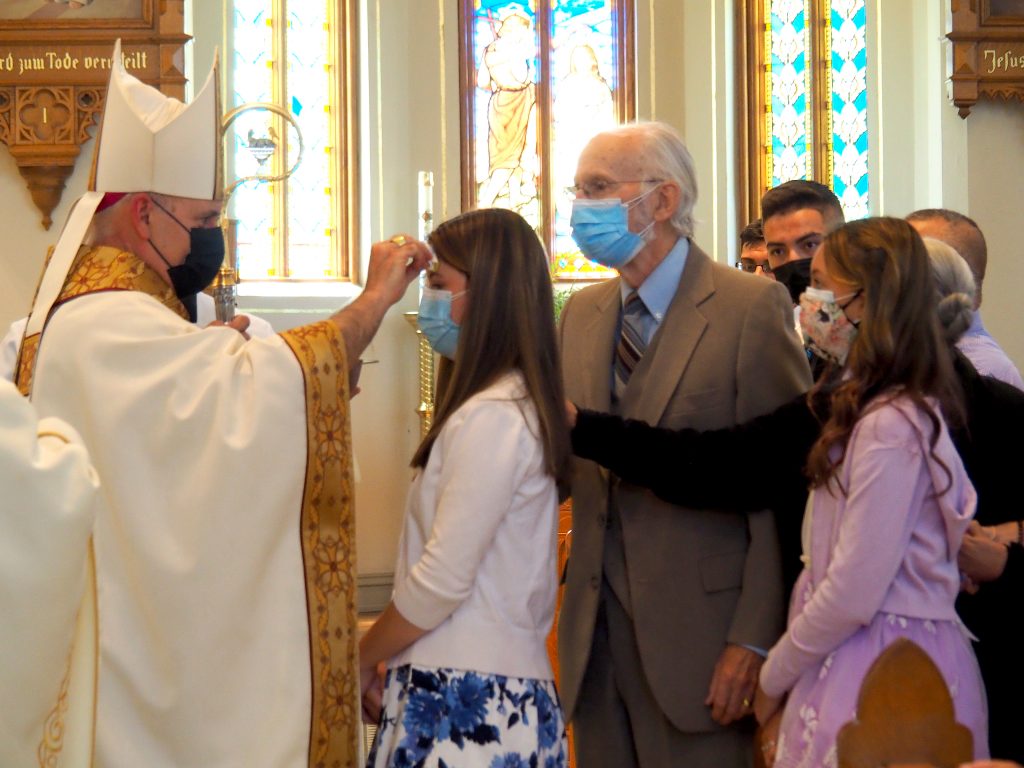 The Mass on the Fort Wayne side took place on the Solemnity of the Most Holy Trinity, and Bishop Rhoades focused his homily on the mystery of the Trinity.

“Though we cannot fully understand the mystery of the Trinity, it is a mystery we believe because it was revealed to us by Jesus. Jesus, the eternal Son, revealed to us the Father and the Holy Spirit,” he emphasized.

“Though as I mentioned, the mystery of the Trinity infinitely transcends us, it is also the reality closest to us, because God is the very source of our being, and we received a share in His divine nature when we were baptized. The Holy Trinity made His dwelling within us.”

He explained that prior to confirmation, the baptized adults would renew their baptismal promises and then “will be drawn more deeply into God’s life and love, into the life and love of the Father, the Son and the Holy Spirit.”

“Love is the first of the fruits of the Holy Spirit,” he said. “My brothers and sisters about to be confirmed, I pray that you will always live by the Spirit you receive today in confirmation, that you will open your hearts each day to the graces of your baptism and confirmation. When you do so, you will help to build up the Body of Christ, His Kingdom, in the world.” 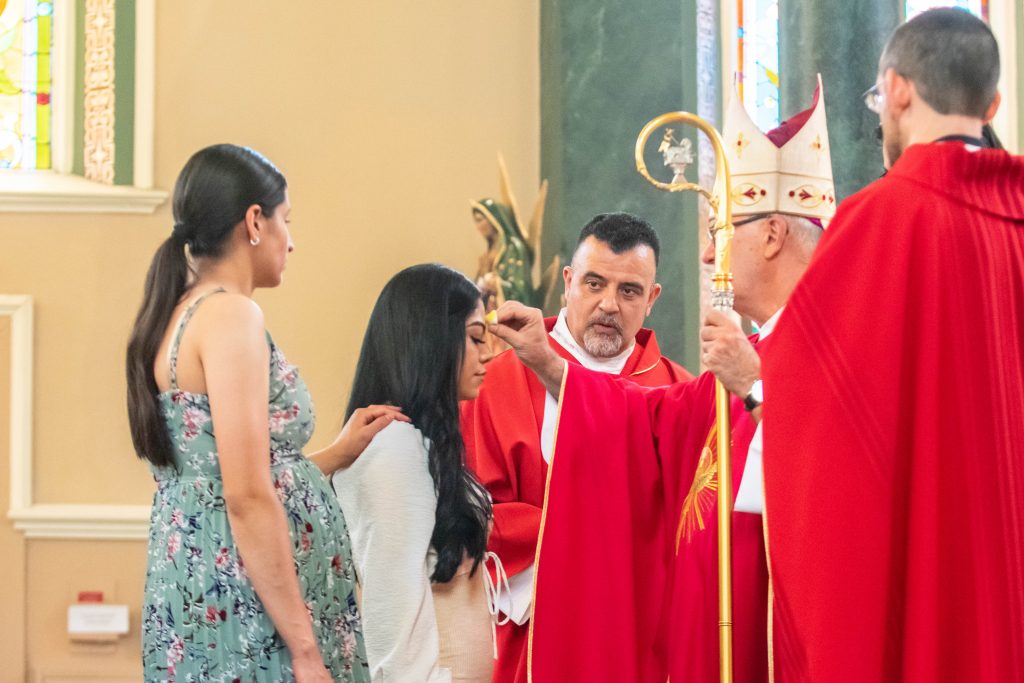 Over 30 adults were confirmed at St. Patrick Church in South Bend June 12 by Bishop Rhoades at the adult confirmation Mass. This takes place every year for those baptized members of the Church who have not received their confirmation. — Julia Akre

In South Bend, the Sunday readings compared the Kingdom of God to the growth of a tree or large plant. The Gospel told of Jesus using the parable of the mustard seed, about which Bishop Rhoades spoke. “God can use small things to do great works. Jesus used this parable to teach us about the Kingdom of God.”

“When we think about the beginning of God’s Kingdom on earth, the beginning of the Church, we realize it was very small and humble,” he said. “It began with Jesus and a small band of followers. It has grown into an immense tree with people of every race, nation, and language all over the world. This growth took place due to God’s hidden power, like, the hidden power in a seed.  That power is the Holy Spirit.”

He went on to explain how Jesus sent the Holy Spirit at Pentecost to strengthen the disciples to go out and spread the Gospel throughout the world. Then he told the candidates for confirmation that they were about to receive the same Spirit and the same calling and charged them not to fear living out their faith in their daily lives. 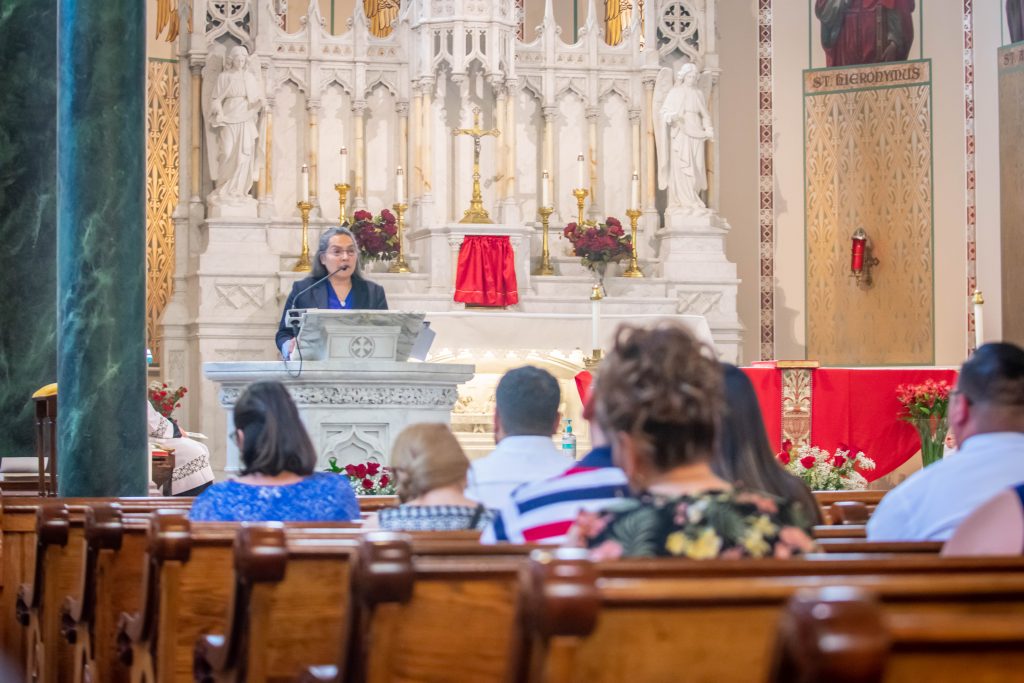 The readings for both Masses were proclaimed alternately between English and Spanish. Father Patrick Hake, pastor of St. Peter, concelebrated on the Fort Wayne side. In South Bend, Father Zachary Rathke, CSC, parochial vicar at St. Adalbert and St. Casimir concelebrated, with Deacon José Ruvalcaba proclaiming the gospel.

In Fort Wayne, three sisters, parishioners at St. Mary, Mother of God Parish, were confirmed together: Kenady, Cayley and Caris Hall. Their grandparents, Michael and Georgia Floyd, served as sponsors.

Caris spoke for the trio when she stated that they were “very excited to be confirmed together.” The three are very close, according to their grandmother, and do everything together, including forming a band they call Angel Project.

After receiving the sacrament, Jaqueline Cerna stated that she chose to be confirmed because “I wanted to renew my relationship to God.”