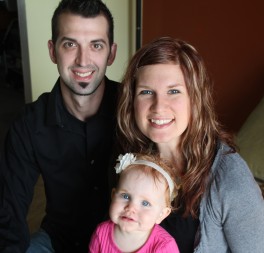 Brad and Meredith Boyles’ dream of starting a family finally came true last year with the birth of their daughter Colette. The tiny red-haired bundle, who has brought them indescribable joy, was a gift — literally. Colette was placed with the Boyles through adoption services at Catholic Charities.

Catholic Charities has provided a wide spectrum of life-changing services for every stage of life in 14 counties of northeast Indiana since 1922. Of the programs this nonprofit service organization provides, adoption and adoption-related services range from agency infant placement, and finalization services to counseling for adoption-related issues and adoption case-management services.

The Boyles were married in 2006, and began building their careers, Brad in communications and later youth ministry, Meredith in nursing, and, of course, their family. Both have always wanted children. Unfortunately after several years they found themselves realizing infertility issues. After much discernment the couple opted for adoption.

It was a natural decision for Meredith as her dream has always been to raise both biological and adopted children.

“I had a friend from South Korea growing up who was adopted. She inspired me,” says Meredith.

Though Brad understood his young wife’s desire he had different thoughts.

“She’s always wanted to adopt,” he says, noting that a common cultural view he’s found holds that adoption is a second best option for having children, “but it was a heart change for me. It was about me working on my selfishness.”

By meeting with other adoptive dads, Brad was reminded that God embraced him as an adopted son. “Why wouldn’t I be enthusiastic about adopting into my family then?” remarks Brad, adding, “God changed my heart and showed us what He had for us.”

As soon as the hopeful young couple agreed that adoption was their best option to start their long-awaited family, Meredith set to work investigating adoption agencies in the area.

Factors the Boyles considered were number of children placed by each agency, cost and staff compatibility. After discussing the pros and cons of each agency the Boyles concluded that Catholic Charities would best meet their needs.

“It was the way Tosha (Gearhart, Family Services supervisor of Catholic Charities) made us feel — very personal, less business-like. We felt she was looking out for our needs,” says Brad. Meredith agrees, “We have no complaints about Catholic Charities. The process went so smooth. Every person we dealt with was so helpful, loving and encouraging.”

Following their initial consultation the Boyles were sent home with a stack of paperwork with a completion request of three months. The couple agrees now that the paperwork was a bit overwhelming at the time, especially in light of the 18 other anxious couples ahead of them on the placement list and the number of birth mothers at the time at zero.

“We had to really trust and have faith in God’s timing,” says Brad, noting that even with the numbers their adoption process spanned only seven months until the birth. “It was a miracle really,” he says.

“There is a richness to all the pieces that came together in order for this to happen,” adds Meredith.

From the time they were chosen for placement, Meredith became ever closer to the birth mother, escorting her to prenatal doctor’s appointments and other events. She was able to be with the birth mother in the delivery room when Colette was born, after which she and the baby were directed to another room where Brad waited anxiously to meet his new daughter.

The agreement between the parties in this adoption has been semi-open, which has Gearhart as mediator. The Boyles agreed to send pictures and letters about the baby to the birth mother every three months. In the year since Collette’s adoption her birth mother has met with her once and all went well.

Meredith says of Colette’s birth mother, “The other incredible part of this journey is that I saw from a (young woman) unconditional love. She loved her (Colette) so much that she knew this was what was best.”

It took months, admits Brad, for it to sink in that Colette belonged to his family. “The first six weeks were pretty overwhelming, but at the same time it was amazing to have this miracle child,” says the new daddy. “I don’t even see her as adopted. She’s just my daughter.”

As they raise their miracle child, the Boyles have agreed on parenting style and direction, seeking a “balance of grace and discipline.”

Brad says, “I want her to have her identity in being a child of God, a gift, precious. She doesn’t need more than that.”

Advice to anyone considering adoption? The Boyles offer passionately, “You have no idea of the richness of the journey that’s before you and the way you’ll be changed and transformed through the process.”

Catholic Charities in the Diocese of Fort Wayne-South Bend offers comprehensive pregnancy services that includes education and support for women facing an unplanned pregnancy, as well as adoption plan assistance. Gloria Whitcraft, new executive director of Catholic Charities, says, “Our pregnancy services department is a pro-life ministry for pregnant women, and their spouses or father of the baby — if the pregnant woman so chooses to include him. We strive to provide a safe, compassionate, confidential, competent environment in which women can receive education and support as they are making a decision regarding their pregnancy.”

Though the staff is fully aware that the decision to parent or place a child belongs to the mother (and father), Whitcraft says, “…We believe that making a decision of this magnitude should be an informed choice, and we value the opportunity to provide women with pro-life options, education and information. Additionally, if a woman is considering adoption but is not receiving support from family, friends or the general community, we will offer her that support throughout her pregnancy until she has made her final decision. She will receive no pressure from us to place her child for adoption.”

If adoption is chosen Catholic Charities is fully qualified to assist with the adoption plan, including accepting consents to the adoption, providing the home-study for the adoptive couple, facilitating open, semi-open or closed adoptions and meetings between birth parents and adoptive parents before and after the adoption, if that is the choice they make, and supervising the infant’s placement, post-adoption.

Whether it be parenting or placing a child, Whitcraft says, “We believe that God’s hand is as involved in an adoption story as it is in a birth story. We honor, respect and care deeply about every member of the triad — the mother and father who conceived the child, the adoptive couple who will parent the child, and most especially the precious gift from God who is the child. We also strongly encourage that the members of the triad respect each other, and we all strive to make the best interest of the child our No. 1 priority.”