The Catholic Church in the United States has spent a staggering amount of money — close to $4 billion in the past 20 years — to investigate, adjudicate and prevent clergy sex abuse, and to compensate victims for the harm they’ve suffered.

And as those expenses have prompted dioceses to lay off staff, sell property and liquidate some assets, there is growing evidence that more Catholics across the country are deciding not to contribute to their bishops’ diocesan appeals because of the scandals.

“Clearly the leadership failures related to the abuse crisis are a major factor in some of the Church’s financial problems,” said Kim Smolik, CEO of the Leadership Roundtable, a national Catholic organization.

At least 20 dioceses since 2004 have filed for bankruptcy protection to pay their bills and provide financial compensation for clergy sex abuse survivors. On Sept. 12, the Diocese of Rochester in New York became the latest to petition the federal courts for Chapter 11 reorganization.

“This is a very difficult and painful decision,” Bishop Salvatore R. Matano of Rochester said during a Sept. 12 news conference. The diocese is facing nearly 50 lawsuits filed in the wake of New York’s Child Victims Act, which took effect Aug. 14 and suspended the state’s civil statute of limitations in sex abuse cases for one year.

The Catholic Courier, Rochester’s diocesan newspaper, reported Bishop Matano as saying that filing for Chapter 11 was “the best and fairest course of action for the victims and for the well-being of the diocese, its parishes, agencies and institutions.”

“We believe this is the only way we can provide just compensation for all who suffered the egregious sin of sexual abuse while ensuring the continued commitment of the diocese to the mission of Christ,” Bishop Matano said.

The dollar amounts of what dioceses have spent only capture a small snapshot of the financial impact the clergy sex abuse scandals have wrought on the Church.

“There are other things that are probably happening and very real, but they’re not as easily identifiable as a direct result of the abuse crisis,” said Pat Markey, executive director of the Diocesan Fiscal Management Conference, an organization that provides fiscal and administrative expertise for the local and national Church.

“If someone wants to stop withholding from a capital campaign or the bishop’s appeal, it could be because of the abuse crisis, but that’s a lot more difficult to make that cause and effect connection,” Markey told CNS.

A Pew Research Center survey released this past summer indicated that 26% of U.S. Catholics reported giving less money as a result of the recent reports of sexual abuse and misconduct by priests and bishops. Father Jay Mello, a pastor of two parishes in Fall River, Massachusetts, told CNS that his parishioners have been quite “vocal” about not donating to diocesan collections.

“They don’t trust the bishops and feel this is the only way they can send the message,” Father Mello said.

However, there are no readily available spreadsheets to document the extent that lay Catholics across the board have actually stopped donating to parish collections, bishops’ appeals or national collections. The data is anecdotal, and often varies from parish to parish, even within the same diocese.

“In terms of dollar for dollar week to week, anecdotally I haven’t seen a real fluctuation. My fear however is that five to 10 years from now is when it will be felt as those who contribute fade away and aren’t replaced by anyone,” said Father Bryan Small, pastor of Sts. Peter and Paul Church in Atlanta. Father Small told CNS he fears the abuse scandals have pushed away future parish council presidents and other lay leaders.

Gray, of CARA, said there is a perception the Church “should be like Walmart” and have a national spreadsheet and financial report. However, he noted that religious institutes, individual parishes, Catholic social service agencies and other diocesan entities have their own budgets and financial systems.

“There is nothing that aggregates all those figures and then releases it publicly,” Gray said. “It’s always been a bit of a blind spot for the Church. There is just no way to connect all the dots and fill in all the information. One diocese may report one set of financials that may not match what is publicly reported by another diocese.” 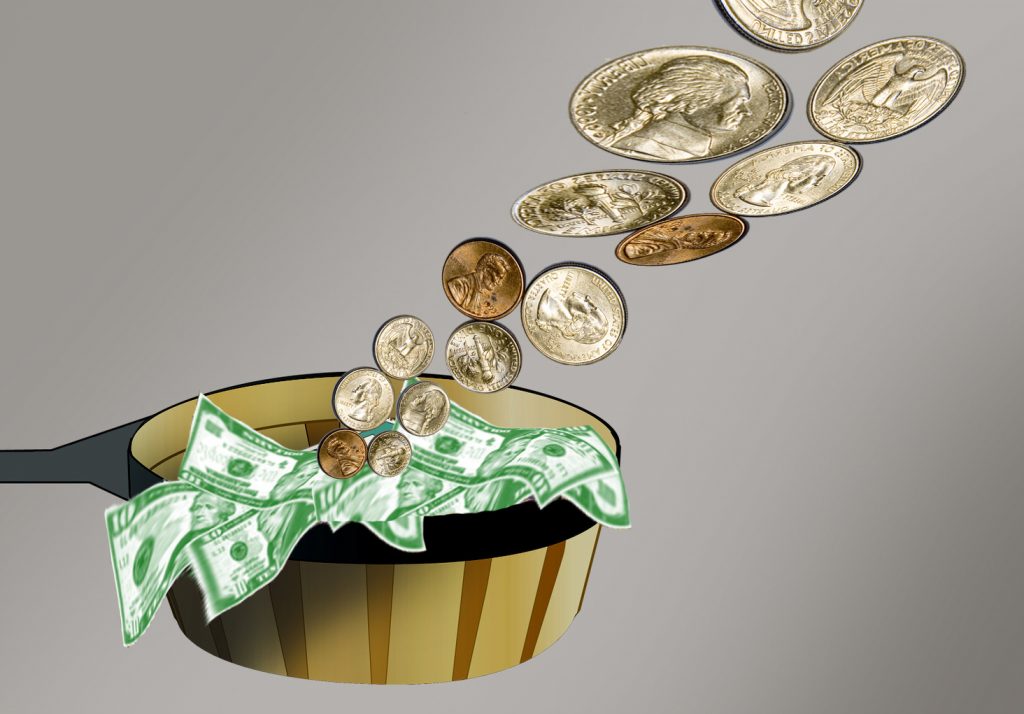 This illustration depicts money going into a collection basket. A Pew Research Center survey released this past summer indicated that 26 percent of U.S. Catholics reported giving less money to the church as a result of the recent reports of sexual abuse and misconduct by priests and bishops. (CNS illustration/Emily Thompson)

Matt Manion, faculty director of the Center for Church Management at Villanova University’s School of Business, identified three major financial impacts from the clergy sex abuse scandals: Chapter 11 filings and settlement payments for sex abuse survivors, the potential losses in donations and collections, as well as the expenses of litigation and other related administrative responses to the crisis.

“That’s time that could have been spent on other parts of the Church’s mission,” Manion told CNS.

The settlements that dioceses have given to clergy sex abuse survivors have prompted many of them to liquidate assets and shrink operating budgets. In some 2018 diocesan financial reports and accompanying documents, Church officials admit the settlements have impacted their ability to carry out the works of evangelization and ministry.

“To be certain, the crisis has had an ongoing impact on the Church ability to invest in its mission,” Bishop Frank J. Caggiano of Bridgeport, Connecticut, told the Fairfield County Catholic, the diocesan newspaper, when the diocese released its 2018 financial report.

Jerry Topczewski, chief of staff for the Archdiocese of Milwaukee, which filed for Chapter 11 protection in 2011 and emerged from the process in 2015, said the archdiocese over the years sold its pastoral center, liquidated property that had been set aside for a cemetery and future parish sites, and cut its staff by more than 45%.

“You start cutting things when you can, and when you are a service organization, like a central office of a diocese is, it’s people who are the bulk of our budget,” said Topczewski. He told CNS the Chapter 11 process enabled the archdiocese to maintain day-to-day operations while creating an equitable system that distributed $21 million to 355 priest-abuse survivors and established a $500,000 fund to cover victims’ personal therapy expenses.

“It’s all been quite the strategic pivot that all began with Chapter 11,” Topczewski said. “When you don’t have two dimes to rub together, you’ve got to figure out what to do.”

In the past year and a half, at least four Catholic dioceses — the St. Cloud and Winona-Rochester dioceses in Minnesota, the Archdiocese of Santa Fe, New Mexico, and New York’s Rochester Diocese — have filed for Chapter 11 bankruptcy protection. In letters to the faithful and via news conferences, the bishops in those dioceses cited the need to provide financial compensation to victims while keeping the mission of the local Church alive.

“We could see where this was all leading and the trajectory wasn’t changing. We just don’t have any money. If we’re not here, we can’t help anybody,” Archbishop John C. Wester of Santa Fe said during a November 2018 news conference in New Mexico, the Albuquerque Journal reported.

Noting the recent Pew Research Center survey, Smolik, of the Leadership Roundtable, said the apparent drop in giving appears to be connected to the twin crises of clergy sexual abuse and the failure of Church leadership.

“I think Catholics are concerned about how their contributions are being used, and it’s important that dioceses move toward greater accountability, transparency and co-responsibility, in terms of their financial affairs,” Smolik said.

In February, the Leadership Roundtable convened the Catholic Partnership Summit, a gathering of more than 200 Catholic lay leaders and clergy. From the summit, it released a report, “Healing the Body of Christ,” which is a plan to develop a new culture of leadership in the Church and a new response to the abuse crisis.

The report urged Church leaders to “provide full financial transparency regarding all aspects of the (abuse) crisis, include how donations are used.” The report also called upon bishops to “build a broad, deep, and transparent financial management and accounting system.”

Said Smolik, “We’re going to have to look at new models at how the Church is served.”