Their love story reads like something found in the pages of a romance novel, perhaps written by Nicholas Sparks. For Emmon and Monique Schmucker, their union is more than a love story, though. It is a faith story. Monique’s unfailing love for Emmon and her faith in God helped lead him to the Catholic Church and the path God had laid out for them both.

From a young age, Emmon “knew I wasn’t Amish.” He wasn’t sure where he fit in, but the answers to his questions eluded him in the Amish community. Feathers of Catholicism sometimes brushed his mind, but the full picture wasn’t obvious until later in life.

He and Monique met in their teenage years in Nappanee, where there is a sizable Amish population in and around the community. Even then, “I knew we were meant to be,” Monique said. To finally bring their love story to completion took years of tears and strife, however, along with Emmon’s conversion to the Catholic Church. 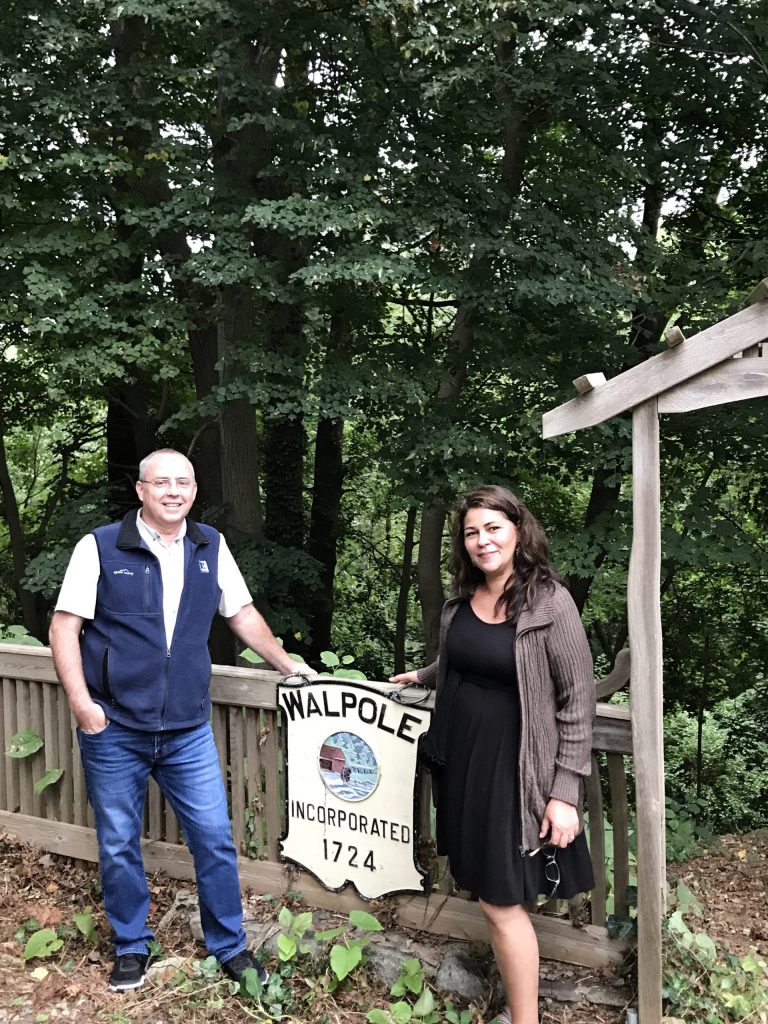 As a young Amish boy of around 14, Emmon knew his feelings for Monique – a Spanish Catholic girl – were “forbidden.” At her age, Monique did not even understand the meaning of that word. What she did know was that someday he would become Catholic. No matter how much they loved each other, the backlash from their parents eventually caused Emmon to walk away from the relationship. Yet Monique said, “I never stopped loving him. I knew we were meant to be. I waited 30 years to get married to him.”

Throughout those years, the two saw each other now and again – touched base then went their separate ways – but both suffered greatly. After leaving the Amish life, Emmon met a woman and had a child with her. Around the same time, he began a career as an auctioneer. His girlfriend and son remained in Goshen while he took an opportunity to travel nationally for an auction company for 18 months. Unbeknownst to him, his girlfriend had asked Monique if she would help care for his child during this time, so Monique “embraced her like Mother Mary would embrace anyone with her grace.”

Finally, standing alone on a beach west of Seattle, Emmon realized he could go no further and returned home to begin a career in real estate. Not long after his return, his girlfriend chose to end their relationship. Through a mutual friend, he and Monique reconnected and began talking about their future.

Unfortunately, both of them were devastated when Emmon’s ex-girlfriend and the mother of his child ended her own life. “At that point, I was absolutely broken,” Emmon said. “As that was happening, there were thoughts in my mind of me being responsible and the guilt and the shame was exponential.” He now had to take care of his son.

Monique was no less hurt by the loss. She said, “I never stopped loving the mother of his child, and I still feel that spiritual connection to her. She’s passed away, but I still honor her as his son’s mother.” 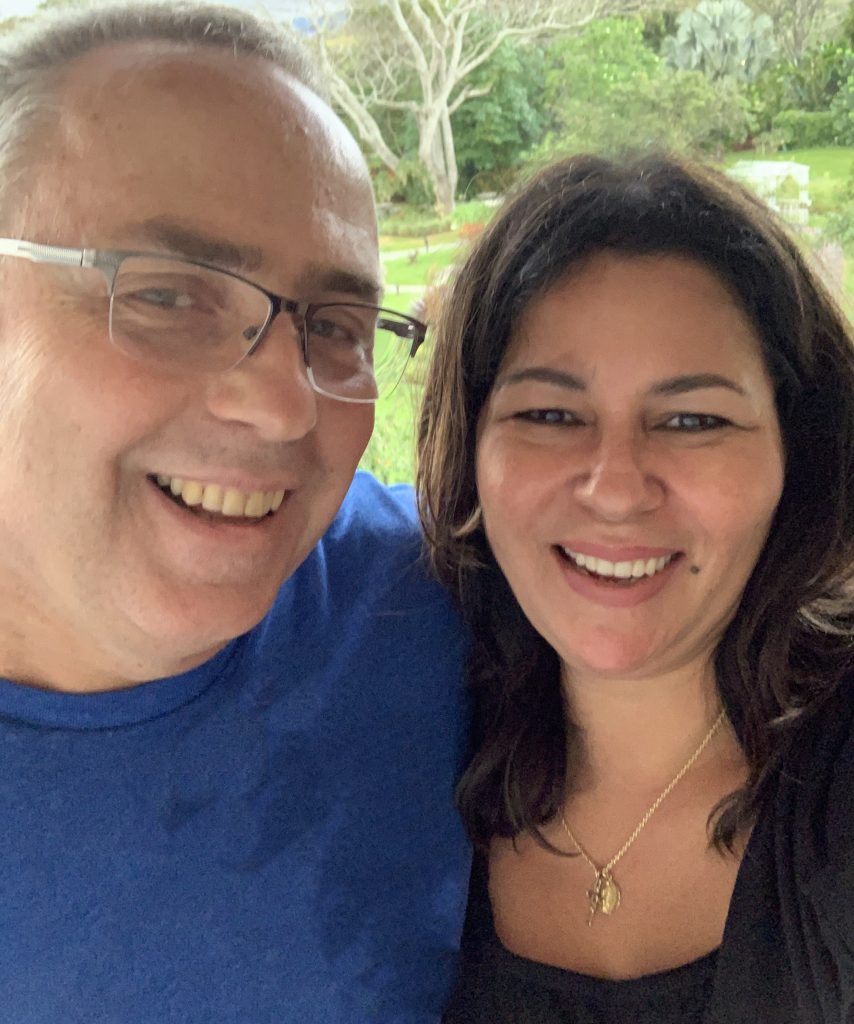 Suffering her own losses, Monique moved to Germany and ultimately to Rhode Island. Emmon again met someone and this time was induced into marriage, rocky from the start. When the motivations for the marriage became clear to him, compounded with the fact that his wife was not willing to work on the relationship, Emmon called it quits after 16 difficult years.

Then something happened that Monique believes could only be the work of God. Emmon’s mother became terminally ill in 2012 – around the same time Monique had returned to the Goshen area due to the economic recession. Things were not going well for her in Indiana, either, so the day she decided to leave town, she felt God calling her to visit Mrs. Schmucker – “So I went.”

Emmon also felt nudged to visit his mother on the same day and was not happy to find a car with an out-of-state plate parked in front of the house. As an “open-minded Amish individual,” he said, his mother had friends all over the country and he thought someone was disturbing her last days on earth. When he walked into his mother’s bedroom, he found Monique holding both his mother and his sister Mary’s hand.

“From my perspective, I can plan for my whole life, and I can never make that appointment happen. We pass each other in life — minutes, seconds. God had returned her to me the third time,” he said. His mother passed away the next day.

Decades after they had first met, they finally married, as Monique had predicted. Emmon attended church at St. John the Evangelist in Goshen with Monique sometimes, though he did not understand everything. It was after returning from Costa Rica a month before the pandemic lockdown that he was drawn further into the Catholic faith.

It was then that their parish priest, Father Royce Gregerson, reached out to Emmon to tell him that RCIA classes would be starting soon and that he should attend. “It was an instruction, not a ‘can you, will you,’” Emmon stated.

Through RCIA, he met George Fattal. “George was able to fill in a tremendous number of blanks that I just didn’t answer, couldn’t answer.”

Emmon sees in the Amish faith many of the same traditions passed on from Catholicism and realized the connections that had long been with him that had gone unrecognized – Catholic friends, a shared ancient history, even the Knights of Columbus halls where he often held auctions.

“So all of these things are in a bucket and every time something bubbles up, it’s connected to the Catholic Church … everything is connected back to the Catholic church,” he said. “This is the only place I’ve ever gotten truth — absolute truth.”

Though Emmon has not been formally welcomed into the Church as he awaits the annulment of his first marriage, Monique says that he is Catholic in practice. It was through her devotion to God that he was able to see to the reality of the Catholic faith. “She has always had faith, she has always been just an absolute pillar for the Church.”

Her faith helped him overcome some of his own misgivings about himself and his life, instilling a lasting hope in him. “Without hope, we have nothing. And we only have hope through God’s grace that there’s going to be a better life,” Emmon said. “Monique has always been an inspiration of hope. Regardless of what’s going on in our life, regardless of what’s happening, regardless of where things are at, she always has had hope, which over the years has instilled in me that there’s going to be a better day. As I sit here at the doorway of what is going to be the future, I look at it and I’m like, ‘there’s hope, there always has been hope, there always will be hope.’”

With a family history of heart disease and her own heart condition, Monique believes that her time on earth is limited, but she is confident now that when her final day comes, “Emmon will have a place to call home and I don’t think he will ever want to leave the Church.”