Dec. 22, 2016, is a date burned into the hearts of those who knew and loved Fort Wayne resident Ed Dahm. Some of his grown children acknowledge that the date is the day he died, along with his beloved dog, in a crash with a charter bus. Others refer to it as “the day he earned his external reward;” still others can only call it “the day of the accident,” because the emotions are simply painfully raw.

Dahm’s wife, Linda, had passed away in 2014. And while it might be difficult for individuals to reach a consensus on how to reference to the date of Ed’s passing, many quickly concur as to how he lived his 86 years of life.

Ed always had a very simple, childlike faith, and that faith was the guide by which he lived. Jesus was his best friend, and he believed that one gets to know a best friend better by spending time with them. His children said he was in constant communication with God, whether it was praying the rosary on his deck, walking through the yard, in the car or at a perpetual adoration chapel.

Ed was instrumental in the development of the St. Jude Parish 24/7 Adoration Chapel in Fort Wayne over 30 years ago. He promoted the need for perpetual adoration chapels in Boston, Mass., throughout Michigan and in other states as well. He helped and was befriended by many of the priests at St. Jude and beyond. Twenty priests and two bishops attended his funeral.

Ed wanted everyone to know about his best friend, who was fully human and fully divine.  Whether it was through pamphlets left for casual reading, a handwritten note or a personal visit, he wanted people in all walks of life to know that they, too, have a best friend named Jesus. He was known to challenge people to spend at least an hour with Jesus through eucharistic adoration, even if it was at 2 a.m. 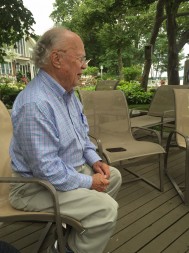 Ed Dahm prays the rosary on the deck of his cottage on Lake Wawasee in Syracuse.

As Ed’s son, Bert Dahm, explained in the eulogy he gave at his father’s funeral: “They found boxes and boxes of prayer cards, religious pamphlets and a variety of other religious items scattered about the accident scene. A passenger on the bus reportedly found a prayer card to Mary the Mother of God, promising salvation at the hour of death. The passenger knew it came from Dad’s car, and that discovery brought tears. Hopefully, it will bring much more.”

Among the religious pamphlets were thousands of Divine Mercy prayer cards. Bert further explained: “Dad passed out those items like he did scores of free carwash tickets. He knew both were great gifts, but he also knew only one had the potential to lead to the penultimate gift — salvation.” Another son, Joe, added: “The Divine Mercy was central to his spiritual life — ‘Jesus, I put my trust in you.’ He did the simple things, such as a note on the back of a framed photograph, that touched many lives.”

Along with his brother Joe, Ed was the co-owner of Mike’s Carwash. He was a pioneer in the industry, having installed the conveyor automatic carwash and creating the first automatic carwash in Indiana.  While this professional discovery brought him accolades, he was a man of integrity whose faith compassionately permeated his business philosophy: “Treat everyone the way you would like to be treated.”

Occasionally, someone will say to one of Ed’s children how successful they became due to his influence.

His children fondly remember how he wrote a monthly column for an international carwash industry publication. He did not write about typical business topics, but rather how to live and run a business by the Golden Rule. Sometimes he would receive a letter from a faithful reader who simply said that the columns reminded them to be thankful.

On the morning of Dec. 22, Ed went to reconciliation, Mass, then had breakfast with Father Bob D’Souza and their buddies at Halls and stopped at a friend’s to say, “Merry Christmas.” The friend asked him how he was, and Ed replied: “Fine, but my bags are packed. The Good Lord can take me home anytime.” He left, saying his ubiquitous “God Bless!” He died an hour later.