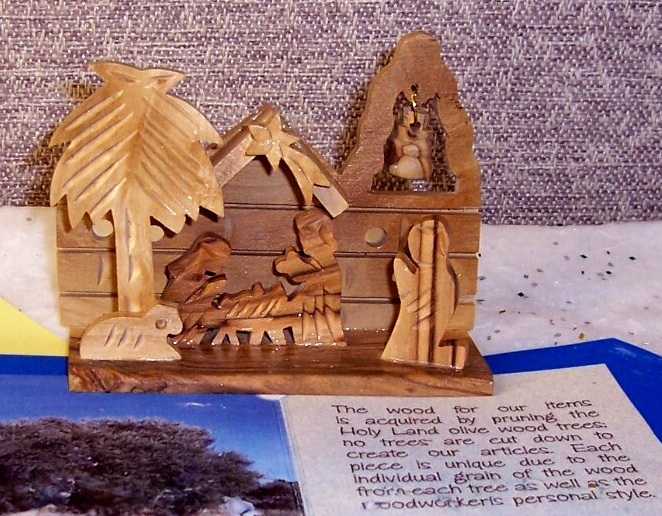 BREMEN — Webster’s Dictionary defines a crèche’ — manger or Nativity scene as some are called — as “a set of statues that represents the scene of Jesus Christ’s birth and that is displayed during Christmas.”

What I did not realize, until I started my own collection of mangers, crèches and Nativity scenes, was that each one is different depending on the artist and/or the company that manufactured it.

My collection ranges from the very simple — a plastic gift from a former religious education teacher of our younger son — to the elaborate “living-room-size” manger I display in a place of prominence.

It began simply years ago when our older son who is now 30 was a child. I was desperately seeking, to no avail, a manger scene that a child could touch and move the figures as he or she would imagine the scene to be before and after Jesus’ birth. I also felt that the actual meaning of the holiday seemed to be more and more lost without people actually thinking about why we celebrated.

And so my collection began, starting with a breakable crèche that had special meaning. It was the one that I used to look at with awe and send up prayers as a child. I moved the camels and sheep and other figures so much so that I ended up breaking one, which my mother glued back together and placed back in the set for many years until I inherited the set.

I felt then, as I do now, that while other decorations such as wreaths, garlands and lights are fine, all of us need to reflect, especially during the busy season of Advent, why we celebrate Christmas in the first place. That is why in my home you would find a crèche’ in every room.

Plans are to donate most of the Nativity scenes to the food pantry in Bremen for those who might not have one in their home. With each, I plan to leave a message of hope for the New Year. 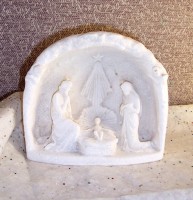 The salt Nativity came from a thrift shop in Nappanee that is part of a church outreach, raising funds for missions. This was a joyous find as I thought immediately on seeing it of how we are the salt of the earth. Note the reading from Mt. 5:13 is: “You are the salt of the earth. But if salt loses its taste, with what can it be seasoned? It is no longer good for anything but to be thrown out and trampled underfoot.” 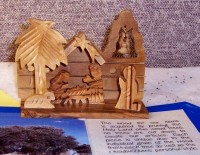 Shown at right is one of the smallest nativity scenes I have, yet may be the most expensive of all I have purchased. I obtained it at a church sale after Mass when we were able to buy similar items from the Holy Land. While simple, the significance of its origin — that it comes from the land where Jesus was born is very special to me.

The largest of all Nativity scenes comes from Deb Locke, who gave me this Nativity after I had my display at the library. She had heard of my need for a large Nativity to fill in space as well as to add to my collection. It is now prominently set up on a buffet in the living room of our home.

The very tall cloth, china and paper formed Holy Family scene at right, was also obtained at a thrift shop on the day I volunteered to place my display of crèche scenes for the month of December in the entryway at the Bremen Public Library. I had prayed that I would find a large manger scene to complete my collection that would gain attention of all who entered the library during the 2012 Christmas Season. As I was walking out of the shop a woman was walking in with it in her arms. I excitedly asked if she was planning to consign it and told her of my immediate need. Her answer was to hand it to me, telling me she hoped that all who saw it would be excited and remember the reason for the season.