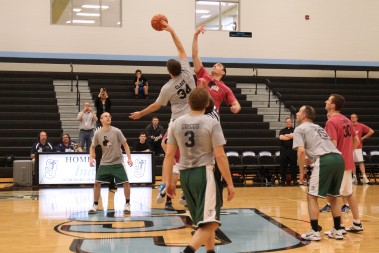 SOUTH BEND — With both of the successful wins of the Cupertino Classic in Fort Wayne, the priests of the diocese joined forces with Jesuit priests to challenge the Congregation of the Holy Cross seminarians in the inaugural John Bosco Jam basketball game. This competitive game took place at Saint Joseph High School in South Bend on April 15. The seminarians took a big lead early in the game but the priests fought their way to the lead with numerous three point shots.  By the end of the third quarter it looked as if the priests might be able to pull off the win but the seminarians were too determined in the fourth quarter and overpowered the priests with their youth winning the game 45-38.

The dynamics of this game were important not just for the entertainment of the over 150 people who were in attendance. The game also opened doors of brotherhood to various groups of current and future church leaders. It was a great way for the diocesan priests to get to know and play along side of some of the Jesuit priests who are studying at the University of Notre Dame. Jesuit Father Mike Magree ended up having the most input on how the priest’s team needed to adjust during the game. Team captain and game organizer, Father Drew Curry noted, “It was fun to see these types of unplanned talents shine forth throughout the evening. And of course, to be able to play basketball with the future leaders of the Holy Cross order was a privilege as well.”

Pastor of the St. Matthew Cathedral in South Bend, Msgr. Michael Heintz took part as a referee for the game. Holy Cross seminarians provided the attendees with laughter and entertaining commentary throughout the game with statements like “Bless me Father for I have missed,” after a missed free throw or “Not even the year of mercy could save that shot,” after an air ball. The event showed everyone the joyful and human face of the Church much in the same way that St. John Bosco was able to evangelize to young people through sports and outdoor activities.