When Katharine Lewis and her husband, Keith, lost their son Romeo two days after his birth, she knew she needed grief support that fed her Catholic faith. She reached out to Lisa Everett, director for Marriage and Family Ministry of the Diocese of Fort Wayne-South Bend.

To help in her healing process, Lewis attended a memorial Mass for infant loss last year at St. John the Baptist Parish in Fort Wayne, sponsored by the Marriage and Family Ministry. The Memorial Mass helped Lewis cope with the loss of their son, as well as another child.

This October, four Masses are offered in the diocese to aid those grieving such a tremendous loss: two in Spanish and two in English. The Masses are open to parents, siblings, grandparents – all who are affected by infant loss.

About the ones Katharine attended, she stated, “There were a lot of families there … grandparents were there, too, so it’s kind of like you’re not alone.”

“It’s a privilege to sponsor these memorial Masses in order to gather together with other individuals and families who have lost a child or grandchild, to entrust our little ones again to the Lord during the celebration of the Eucharist, and to pray for the healing that only He can provide,” said Everett. 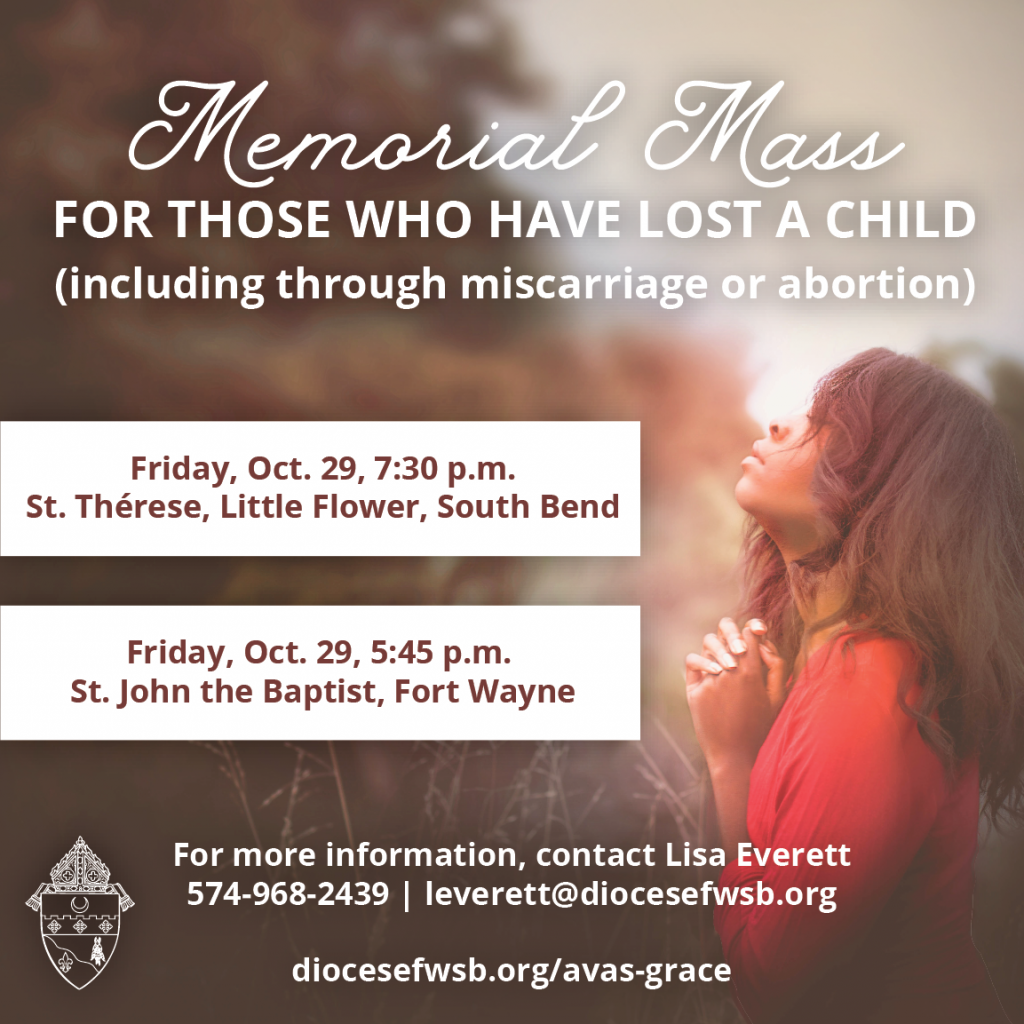 It has been more than a year since Romeo, who was born with trisomy 18, passed away in the arms of his parents. In those two days, the couple was able to introduce him to their other three sons, and arrange for him to be baptized and confirmed. The Lewis family then suffered another loss six weeks into pregnancy following Romeo’s passing.

Through the last year, Katharine has found the Mass to be a source of comfort and healing. During each one, “heaven comes down. Mass is the closest thing to heaven we have,” she said, and the moment of consecration is when she feels closest to Romeo.

She has been teaching her sons that they are closest to the saints in that moment as well, and her son who is about to make his first Communion, “realizes at 7 years old that it’s bigger than us. The Body of Christ is bigger than us.”

This was especially profound at the memorial Mass last year, she said, when she was surrounded by others who have been in a similar situation. She remembers seeing relatives there who she hadn’t realized had lost a child.

Though she could only describe her own feelings at the event, it seemed that there was a certain unity among those present. “It was like, OK, this is the closest thing we have to being reunited with (our babies).”

St. John the Evangelist pastor Father Andrew Budzinski brought out a statue of Our Lady of Sorrows for last year’s memorial Mass and elaborated on the similar pain that Mary, too, felt. It was through this that Katharine was better able to relate to Mary’s suffering.

“I remember Father Andrew talking about her humanity. He said it’s OK to be sad and it’s OK to feel those feelings … This is where Mary’s fiat comes in; she still had faith, she still cried, she still was sad.”

In addition to the memorial Masses, the diocese also sponsors Ava’s Grace, a support group for anyone who has suffered the loss of a child to miscarriage, stillbirth or infant loss. The group has gone to an online platform during the pandemic and meets once a month, every third Wednesday. Katharine began faithfully attending the meetings.

“Ava’s Grace has just been the most beautiful – I wish more people knew about it,” she said.

Katharine credits the ministry for a “faith explosion” that has taken place in her home.

Grief takes many forms and can devastate an entire household. Katharine’s family struggled to deal with not only the loss of Romeo, but the unborn child they named Fiat, whose gender was unknown. Through Ava’s Grace, Katharine has connected so strongly with her faith that she has been able to give God control over her life – like Mary’s fiat.

The year 2020 became a year of surrender for her. She completed the consecration to St. Joseph, and despite the fear of another loss, her sons began to pray to him for another sibling. By God’s grace, Katharine and Keith are now expecting a baby within a matter of weeks.

For now, Katherine is using her experience to help others find healing. “I want people to know about Ava’s Grace, and I want people to know about the memorial Masses,” she stressed. “I know for some people, faith gets weakened in those kinds of moments. I really am blessed that we had the opposite effect, and I think part of that was because of our sons — seeing them play and realizing that there was a piece of them missing, I didn’t want them to be angry or mad. It was such a hopeless situation, and I wanted them to have something to hope for. I feel like there’s nothing better to hope for than heaven.”

Katharine reminds herself that for a brief time, she held a saint in her arms. Each time she attends Mass, she said, she knows that Romeo and the entire communion of saints is present with her.