If there ever was a top ten list of the worst things a parent or child could hear, the word “glioblastoma” would be at the apex of it. It is an aggressive type of cancer that occurs in the brain, usually striking older adults, often with fatal results. Fifteen-year-old David Filer is determined, with the help and prayers of his family and friends, to fight – and beat – his recent and dire diagnosis.

David and his parents are members of Christ the King Parish in South Bend. He is an incredibly talented tennis player. So talented, in fact, that Dan Biggs, a former professional tennis player and longtime family friend and coach for David and his father, said that David has the potential to play professionally. 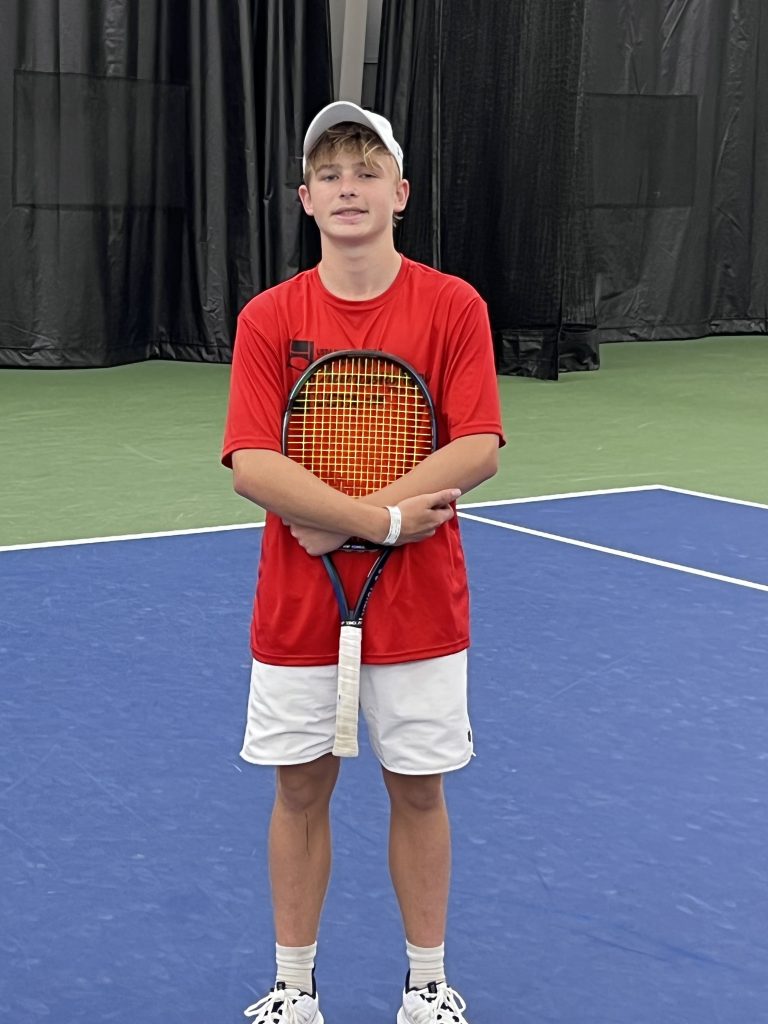 Photos provided by David Filer
Tennis is life for David Filer, a 15-year-old parishioner at Christ the King Parish in South Bend. David was recently diagnosed with a brain cancer known as glioblastoma, and his family is asking for prayers for him.

“He has the highest ceiling of anybody I’ve ever seen,” Biggs said. “This boy has a legitimate chance to play professional tennis and that’s his dream. But the important thing to me, he’s a much better person than he is a tennis player.”

All those dreams came to a screeching halt in early February. David’s dad – also a David, here referred to as Dave – reviewed the details of his son’s brutal ordeal. As a tennis competitor, David often travels to different locations with one of his parents to compete and practice with the best in the game. He spends much of his time at the USTA National Campus in Orlando, Florida, where Dave shares that they recently bought a house.

It was at practice in that location that David began complaining about headaches. Dave said they dismissed them largely as migraines brought on by dehydration. After flying to tournaments in Eau Claire, Wisconsin and New Jersey, they flew to Phoenix, Arizona for a National Level 2 Championship. It was here, thousands of miles from home, that the pain became so intense that David had to be taken to the emergency room. Testing found a large mass on David’s brain. 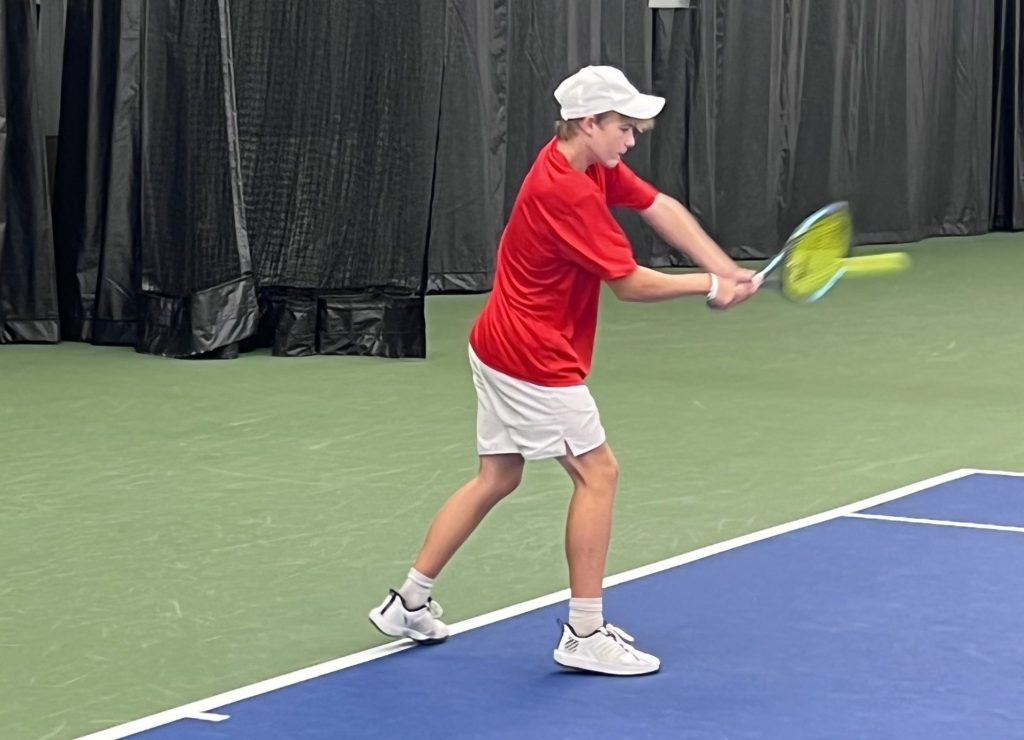 David plays competitive tennis all over the U.S. and his dream is to play professionally in the future. The tennis community has shown great support for him.

Both Dave and his wife, Pam Mozdzierz, believe that God has been working on David’s behalf. “This is the strange part, you look at the whole picture, why we think God was saying this is where he had to be,” Dave said. Had their son needed medical attention a week prior, Eau Claire would not have had the necessary facilities; neither would Monterey, Mexico, their next destination the following week. Phoenix, however, did. Dave is certain that David would have died if they had been in Mexico. “It happened there for a reason,” Pam agreed.

David was taken to emergency surgery at a “top-notch” children’s hospital in Phoenix, as Pam said, where an incredible pediatric surgeon removed the large tumor. Dave commented, “This surgeon did the most unbelievable job. In two-and-a-half days, [David] was out of the hospital. Five days later, he was hitting, practicing.”

Now David is receiving proton radiation and photon radiation at an Orlando hospital that provides the necessary treatments. He is still spending time on the court and his level of physical fitness gives the Filer family hope for his future. Dave said that although David is receiving treatment, “really, you wouldn’t know. He’s very positive; you have to be to beat it, I believe.”

Pam shared how the ordeal has changed the way she views her faith. “I think you do a lot of reflection and talking to God. I started out asking why, trying to get an answer,” Pam said tearfully. “I know that I’ll never know exactly why, but God has a reason for the path in our lives. No matter what we’re confronted with, we’re not alone, God is walking with us.”

“I feel like our family has definitely grown in how we pray,” she added. “We’ve become better at praying as a family.”

The Filer family is hoping and praying for a miracle. More than anything else, that is what Dave and Pam have asked other people to do for them – to pray; pray that David can overcome the obstacles thrown in his path so that he can live his dreams. “Your prayers are everything to us,” Pam said.

Biggs, whose own child conquered cancer many years ago, knows the importance of a strong faith and prayer life in times of crisis. He gave David a paper upon which was written the verse from Isaiah 40:31: “But those who hope in the Lord will renew their strength, they will soar on wings like eagles; They will run and not grow weary, they will walk and not be faint.” David placed this on the back of his phone, where he looks at it often.

Tennis has been David’s passion for many years, and the Filer family has gotten to know many other tennis players and their families – people who also live and understand the hectic lifestyle of a sports family. Since learning of his diagnosis, the whole tennis community has come together on David’s behalf, sending prayers, thoughts, texts and emails to the family, encouraging them in their most difficult moments.

She has played on the court with David a couple of times. “He is such an amazing kid,” Cook said. Though she hasn’t known him long, she remarked on his love for the game and his competitive spirit, as well as his will to beat the cancer. “He is such a fighter, so genuine. He’s really an inspiration to me.”

“As a fellow athlete, I can’t imagine how he’s doing” in facing such a difficult prognosis, she said. She remarked that she is glad to see him continuing to play the game that they are both so passionate about.

Until a few days after his surgery, David had not been aware of this support. When he finally checked his social media accounts, he was amazed by the outpouring of love from the many well-wishers. “I got so many people saying that they were praying for me. It was really special to me.”

Faith has become a greater focus in David’s life over the last couple of months. He stated that he’s been “getting more into my faith” and praying more often throughout the day. “I wasn’t the most engaged before,” he said, but now he makes prayer before bed and meals a priority.

David is staying positive out on the tennis court every day, doing the best he can as an athlete and fighting against a ruthless enemy. Yet he and his parents and so many others know that he is not alone in his trials. He said, “I’m always going to believe that God’s going to get me through this.”