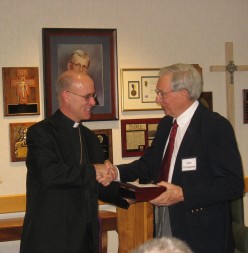 Sponsored by St. Mary Parish and the diocese, the award was created six years ago in memory of Father Thomas P. O’Connor, considered by many to be an icon of Catholic faith in action. Father Tom died on St. Patrick’s Day, March 17, 2004, after serving as pastor of St. Mary for more than 34 years.

In his remarks, Bishop Rhoades congratulated the four finalists and the recipient of this year’s Father Tom O’Connor Light of Christ Award.

“May God bless all of you … for your faith-filled service and your love of neighbor. That’s what this is all about,” he said.

“And when I was reading about Leon,” Bishop Rhoades continued, “I immediately thought of the words of the Holy Father in an apostolic letter that he wrote months ago for the beginning of the Year of Faith, which will begin in October. … In that letter, Pope Benedict wrote about the virtue of faith. And he explained that faith and charity each require the other. ‘Faith without charity bears no fruit while charity without faith would be a sentiment constantly at the mercy of doubt,’” Bishop Rhoades quoted the pope.

“The Holy Father also reminded us of the words of St. James: ‘What does it profit, my brethren, if a man says he has faith but has not works. Faith by itself if it has no works is dead. But someone will say, you have faith and I have works, show me your faith apart from your works and I by my works will show you my faith’ (Jas 2: 18),” Bishop Rhoades said. “Leon Youngpeter, by his works, has shown us his faith,” Bishop Rhoades remarked. “This is what the Light of Christ Award is all about — it’s what Father Tom O’Connor was all about — faith and action, putting our faith into practice!”

Youngpeter, well-known in the community for his administrative and classroom expertise, was selected for his work outside the classroom “encouraging the next generation of Father Toms.” For 24 years he managed the St. Mary’s Christmas Box distribution program, enlisting the help first of the Snider High School concert band and homerooms, and then expanding the youth involvement to include North Side High School’s Honors Program, Elmhurst High School, the Bishop Luers High School Key Club, South Side High School English classes, and the Wayne High School Tech program.

Youngpeter’s work with teens provided resources to increase the Christmas distribution program from serving 75 families initially to serve more than 1,000 families each year. And, it has given young people the opportunity to learn how to give of themselves to help others.

“I said I would never seek recognition for what I was doing for myself because I felt strongly that a commitment to help the poor and the needy in this community had to come directly from your heart and not because you wanted anyone out there to recognize what you were doing,” Youngpeter emphasized in his thank-you remarks.

The award carries with it a cash gift in the recipient’s name to the project or charity of his/her choice. At Youngpeter’s request, this year’s stipend will be divided between Miss Virginia’s Mission House in Fort Wayne and Francis Mustapha’s school for girls and boys in Sierra Leone.

In a departure from past years, finalists for the 2012 award were recognized at the beginning of the ceremony and luncheon by Father Phillip A. Widmann, pastor of St. Mary. They included:

• Michael Floyd, a teacher at South Side High School, was nominated for providing unique volunteer student-learning opportunities through Windsong Pictures.

• Elizabeth Keen, school counselor at St. Joseph-St. Elizabeth Ann Seton School, was nominated for her work with the Owning Up and Rachel’s Challenge programs.

• Rev. Leonel and Sybel Pech were nominated for their work with Hispanic families in Fort Wayne through Hispanic Development, an English as a second language program, and for their advocacy on behalf of those learning to adapt to new lives in Fort Wayne.

• Michel Sturm, DDS, founder of Pathways, Inc., was nominated for his efforts among homeless teens aging out of most of the available social services.

According to Andrea S. Thomas, chairperson of the event, the Father Tom O’Connor Light of Christ Award is given annually to persons of faith in one of three categories: Peace and Justice, Diversity and Inclusiveness, and Education. In 2013 the committee will accept nominations for those whose efforts promote Peace and Justice. Nominations are open to persons of all faiths.