VATICAN CITY (CNS) — Try a little tenderness. That’s basically how Cardinal Kevin J. Farrell, 73, summarized Pope Francis’ vision for what older people, their grandchildren and friends should do to change the world after the COVID-19 pandemic.

The cardinal, prefect of the Dicastery for Laity, the Family and Life, used the word “tenderness” nine times when he presented to the press the pope’s message for the celebration July 25 of the World Day for Grandparents and the Elderly.

Pope Francis did not use the word at all in his 1,800-word message, but it came through as he acknowledged the suffering, loneliness and fear many older people experienced during the worst of the pandemic, and also when he reminded older Catholics that, like him, they still have a vocation to share the faith and care for others.

The Vatican as a whole, not just the pope or Cardinal Farrell’s office, are making a big deal out of the world day. Pope Francis will celebrate Mass with older people, his message — as a text and as a video — was available in eight languages by June 23 and the dicastery has published a 43-page pastoral kit with suggestions for homilies, for prayers of intercession and for action.

The action focus is all about tenderness, too: Visit your grandparents and any older person living alone. Offer them a ride to Mass. Take them a flower. And, for those who cannot go to church, take them the Eucharist.

“In places where health emergency measures still make it impossible to visit in person, love can use imagination to find ways of reaching lonely elderly people by phone or social media,” the pastoral kit says. 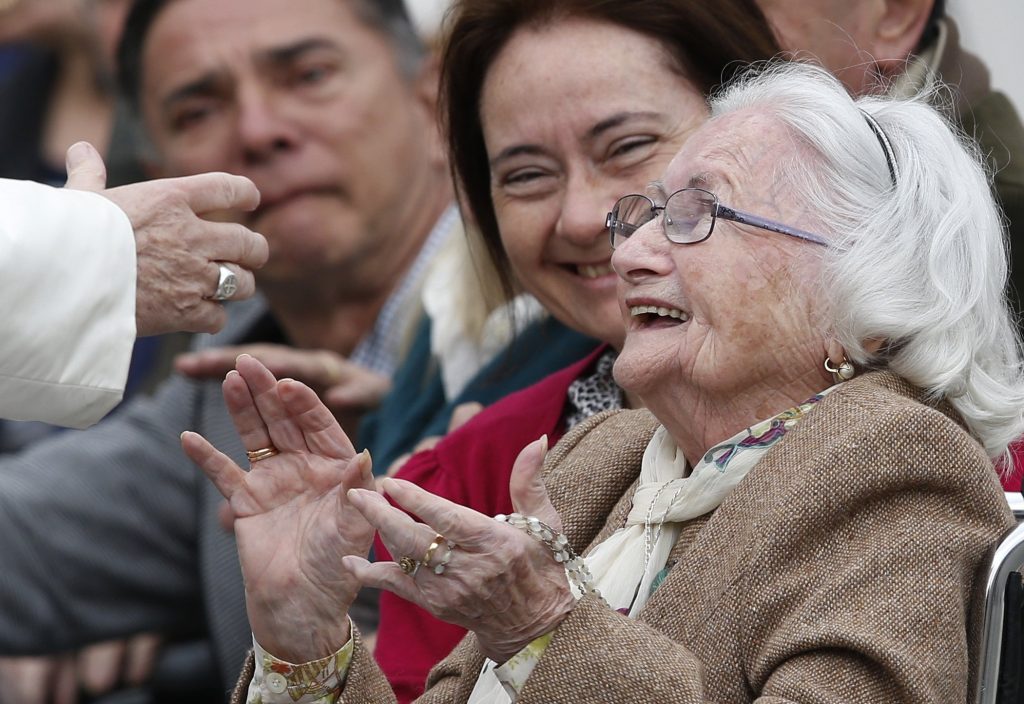 An elderly woman reacts as she meets Pope Francis during his general audience in St. Peter’s Square at the Vatican in this March 22, 2017, file photo. The pope has chosen the theme “I am with you always,” for the first World Day for Grandparents and the Elderly, to be celebrated July 25. (CNS photo/Paul Haring)

That is precisely what Maria Sofia Soli has been doing since March 2020 when Italy initiated its first COVID-19 lockdown.

Soli, who is 88, volunteers with the Community of Sant’Egidio in monitoring the situation of about 6,500 people who are over 80 and living alone in Rome. The project involves regular telephone calls and home visits, but also organizing outings and celebrations. Since Soli could not make her regular phone calls from the Sant’Egidio offices during lockdown, she told reporters June 22, younger community members set up her computer so she could keep track of the calls from home.

At the presentation of Pope Francis’ message, Soli said she and her peers are on board with the pope’s focus on helping humanity come out of the pandemic better off.

“We must try to direct humanity toward a better future with less selfishness and conflict and more fellowship. Yes, the future,” she said. “The elderly do not only look to the past. Neither fatigue nor frailty can prevent us from dreaming for the sake of our grandchildren and for the generations to come.” 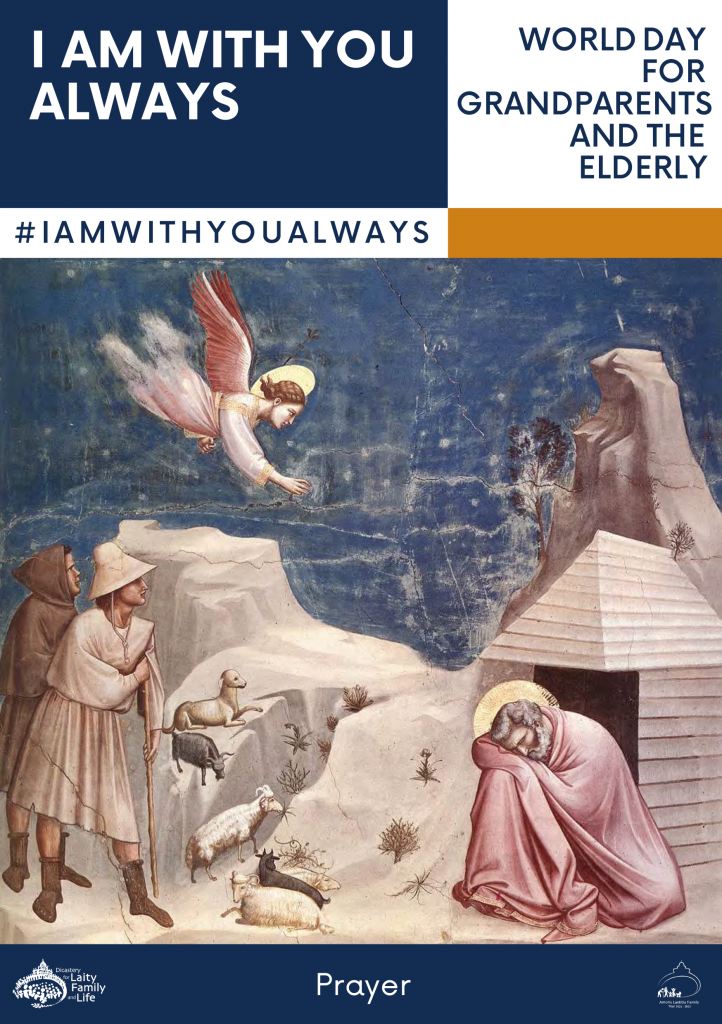 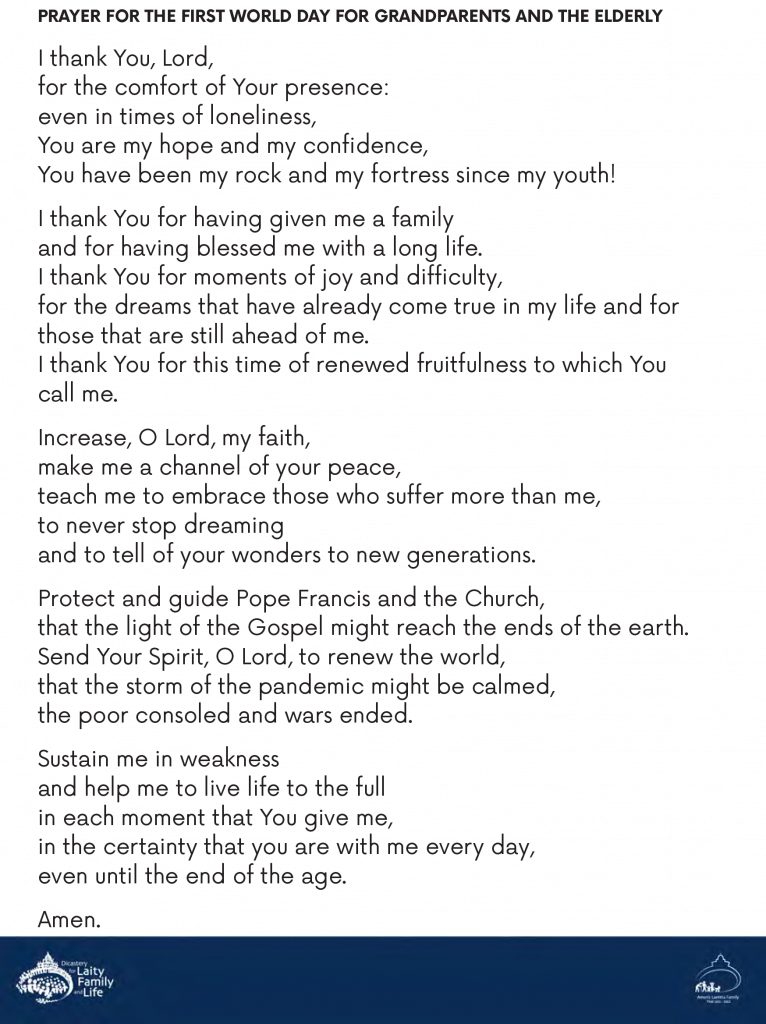 Calling Catholics around the world to mark the day after “dramatic months of difficulty,” Cardinal Farrell told reporters, Pope Francis invites people to embrace tenderness, especially toward the elderly, who suffered so much during the pandemic.

But, he said, the day also is about “the tenderness that grandparents show toward their grandchildren, of the solid guide that the elderly can be for many disoriented children, especially in a time like the one we are living in, in which personal interaction has become rare.”

“Tenderness is not just a private feeling, one that soothes wounds, but a way of relating to others, which should also be experienced in public,” Cardinal Farrell said. “We have become accustomed to living alone, to not hugging each other, to considering the other as a threat to our health. Our societies, the pope tells us in ‘Fratelli Tutti,’ are now fragmented.”

“Tenderness has a social value,” the cardinal insisted. “It is a remedy we all need, and our elderly are those who can provide it. In a frayed and hardened society emerging from the pandemic, not only is there a need for vaccines and economic recovery — albeit fundamental — but also for relearning the art of relationships. In this, grandparents and the elderly can be our teachers. This is also why they are so important.”

The first World Day for Grandparents and the Elderly will be celebrated online with the hashtag #IamWithYouAlways. It is the hope of Pope Francis that this theme clearly expresses that, during the pandemic and in the better times that will hopefully follow, every ecclesial community wishes to be with the elderly always. This World Day is an opportunity to reaffirm that the Church can never remain distant from the elderly or from anyone who carries a cross.

On this day, July 25, younger adults and children are encouraged to engage in that visible outreach of the Church, a visit to their elderly family and friends.

The Apostolic Penitentiary also promulgated a Decree granting a plenary indulgence on the occasion of the World Day for Grandparents and the Elderly. The elderly can obtain an indulgence by participating in one of the Masses celebrated on the occasion of this world day. The indulgence will be granted under the usual conditions: sacramental confession, eucharistic communion and prayer.

In view of the continuing health emergency and the fact that some elderly people are unable to attend Mass in person for health reasons, the indulgence is extended to those who participate via television, radio or the internet.

The indulgence is also granted to all those who perform a work of mercy on this World Day by visiting an elderly person who is alone.

In places where visiting in person is expressly forbidden by the public authorities to avoid contagion, it is also possible to obtain the Indulgence through a virtual meeting by uniting spiritually to the sacred functions of the world day, offering prayers, pains or sufferings, through Masses celebrated on television, radio and social media.