GREEN BAY, Wis. (CNS) — As long as she can remember, Polly Olsen, 29, said she has handed out heart-shaped cards on Valentine’s Day.

“Basically since I could walk, me and my siblings would distribute them at nursing homes and hospitals,” said Olsen. “My mom would dress us up fancy and we would go hand them out.” The handmade cards included a positive, handwritten message in the center, along with a Bible passage.

Olsen continued the tradition when she enrolled part-time at Northeast Wisconsin Technical College in 2009. On Valentine’s Day 2018, after distributing about 30 cards on the NWTC campus, Olsen was stopped by a campus security officer after someone anonymously called the security office.

She was told that handing out the cards constituted “soliciting” and was in violation of the college’s public assembly policy. Olsen also was told that some people might find the Bible references on her cards offensive. 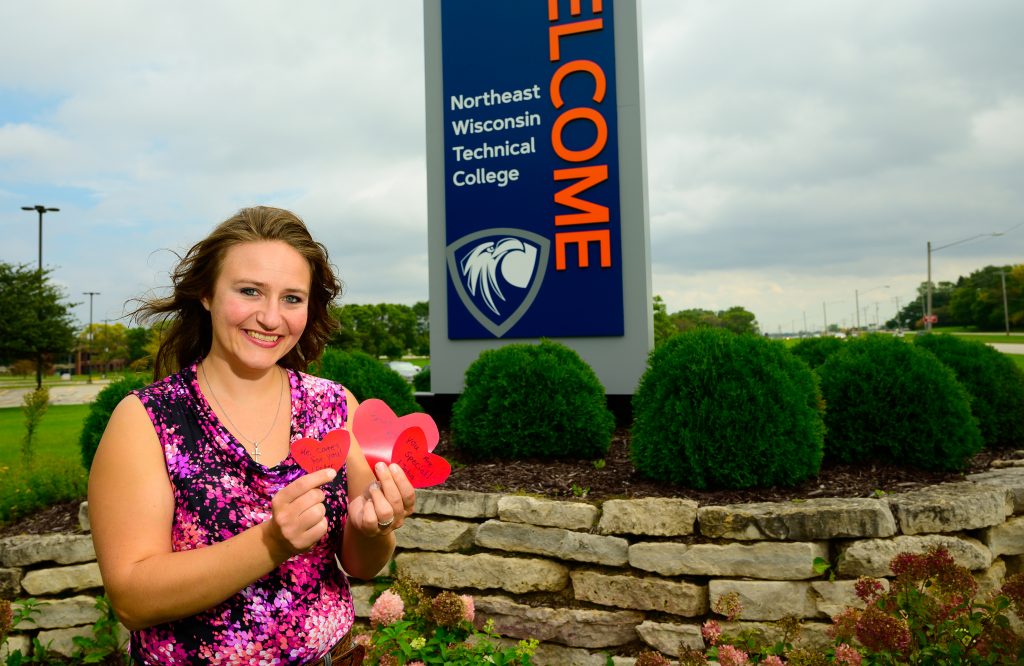 Polly Olsen holds three handmade Valentine cards that feature a Bible passage and messages such as “Jesus Loves You!” outside the Northeast Wisconsin Technical College Sept. 21, 2019, in Green Bay, Wis. Olsen was told that handing out the cards constituted “soliciting” and was in violation of the college’s public assembly policy. She was also told that some people might find the Bible references on her cards offensive. (CNS photo/Sam Lucero, The Compass)

Olsen, through the Wisconsin Institute for Law and Liberty, filed a complaint against the college Sept. 4, 2018, claiming that the college was violating her First Amendment rights of free speech. On Sept. 13, a federal judge in Green Bay ruled that NWTC did infringe on Olsen’s right to free speech.

In his 14-page summary judgment, U.S. District Court Chief Judge William Griesbach stated that NWTC “had no more right to prevent (Olsen) from handing out individual Valentines than it did to stop her from wishing each individual to have a ‘good morning and a blessed day.’”

In a statement, Rick Esenberg, president and general counsel of the Wisconsin Institute for Law and Liberty, said he was thankful for Olsen “stepping up to defend not only her own rights, but the rights of all students.”

“This case was very simple,” said Esenberg. “NWTC, through their public assembly policy, sought to restrain and contain the First Amendment rights of students. That is, and always has been, unconstitutional.”

The college’s president, H. Jeffrey Rafn said in a statement: “We fully support freedom of speech and we promote the respectful exchange of ideas. We also have a responsibility to protect the privacy of students and the integrity of the learning environment. The college will continue to ensure that it meets its legal obligations.”

In an email to The Compass, Green Bay’s diocesan newspaper, Rafn said the college’s decision to prevent Olsen from distributing cards wasn’t an attempt to obstruct her freedom of speech but said it came in response to her entering private areas of the campus to hand out her cards.

In his summary decision, Griesbach said there was no evidence Olsen trespassed in restricted areas.

“Although NWTC makes much of the fact that Olsen went into the General Studies office to give a Valentine to her friend Casandra, there is no evidence that this was a restricted area and it is undisputed that Olsen had a practice of visiting employees at NWTC who were friends for both personal and school-related reasons,” the judge wrote.

In an interview, Olsen, who graduated from NWTC last May with a paralegal degree and law office administration certificate, told The Compass that she was first prohibited from distributing Valentine cards in 2014, the year she and another student formed an InterVarsity Christian Fellowship chapter on campus.

“When they stopped me and a couple of my friends from handing them out, they decided to go after my club, saying that we had disruptive members on campus,” she said. “They asked me to apologize for my ‘Jesus loves you’ Valentines. I told them I would not do that.”

Olsen calls the Valentine tradition “my personal thing that I do every year.” It became more personal on July 16, 2013, the day her mother, Debra, died from pancreatic cancer.

She said she makes 500 to 600 cards and distributes them with friends.

This spring Olsen’s case made national headlines when she was invited to the White House by President Donald Trump to attend a March 21 ceremony where he signed an executive order protecting free speech on college campuses.

“What motivated me the most to not give up and not cower to the school’s bullying was the fact that they wanted me to apologize for Jesus’ name,” Olsen, who attends Jacob’s Well Presbyterian Church in Green Bay, told The Compass.

“I will not deny Jesus in any way,” she said, “so I guess, ‘stand up for Jesus no matter what,’ would be what I would tell people. He uses little things to do big things, like change a law in our country with a Valentine.”

Lucero is news and information manager for The Compass, newspaper of the Diocese of Green Bay.