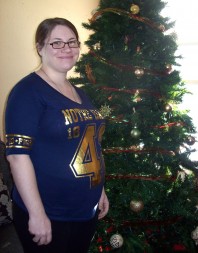 Emily Wohlgemuth stands in the living room at Hannah’s House, Mishawaka. “To know that people are out there who are supporting us,” she exclaimed, “they keep Hannah’s House going because they believe we can do it. We ought to believe as well.”

MISHAWAKA — When Emily Wohlgemuth became pregnant she was met with more than a few criticisms and difficulties. People she loved and trusted told her it was the worst mistake of her life. Friends told her it would be best for everyone if she would give the child up for adoption. Increasing tensions between herself and those with whom she was living at the time led her to believe she needed to find a “safer” place for herself and her unborn child.

A search on the Internet led her to the sanctuary she was seeking. Hannah’s House is a home in Mishawaka, which describes its mission as “a maternity home that provides a safe environment, programming and support for the physical, emotional and spiritual well-being of pregnant young women.”

Completely funded by private and community donations, Hannah’s House emerged to fill the need that was found by crisis pregnancy centers for young woman to have a safe and nurturing environment during their pregnancy.

Though Wohlgemuth said she was never tempted to abort her son, she described feelings of fear and doubt that sometimes confused her. Embroiled by so much negativity surrounding her at the beginning of her pregnancy she did wonder, “What if they are right? What if I can’t do this?”

But soon after meeting with her newfound allies at Hannah’s House, her perspective changed.

“Hannah’s House is a maternity home with a heart,” she explained. “That’s what is says on the sign — our slogan. The ‘house moms’ here — they care about us. They don’t want to see us fail. They really want to see us get ahead.”

Integral to the mission of Hannah’s House is a program based on expectations that residents are working toward bettering themselves. Wohlgemuth described some of the “works” that count toward the 40-hour weekly productivity requirement that all the residents agree to accomplish during their stay. Studying job skills, filling out job applications, reading articles or books on prenatal and postnatal care, contributing to the home environment through meal preparations and other domestic chores — all are considered by Wohlgemuth to be part of the way toward more fully reaching her own potential.

Director, Andrea Popielski, explained, “We require residents to attend doctor’s appointment, counseling and church as well as working on self-sufficiency skills. Those are critical pieces of what we do,” and how the women residing at Hannah’s House empower themselves while providing for themselves and their children.

“Now I am in this mindset,” Wohlgemuth said. “I’m going to do this. I’m going to be a mom. It’s awesome. I have this little boy. This life is growing inside of me.”

She spoke with hope and pride of things that she has accomplished and the items that she has been able to earn, with the help of Hannah’s House and community donors for the baby that is due in April.

She said, “It is unreal how much they have helped me. I have a carseat, a crib, a bouncer, a baby swing, a pack-and-play, diapers. I have so many baby clothes,” all of which, Wohlgemuth was empowered to earn through the productivity program at Hannah’s House.

Much of her desire to become a good mom rests in the gratitude she feels toward the local community.

Tears filled her eyes as she described the overwhelming generosity that she and other residents of Hannah’s House experienced firsthand this Christmas season.

“This is an example of people who support us,” she said. “This Christmas, people we don’t even know, who don’t even know us, dropped off big bags with gifts in them for each of us. They had our names on them. They all had all sorts of baby stuff in them and even gift cards. They don’t know who we are. We don’t know them!”

She cried as she exclaimed, “To know that people are out there who are supporting us, donating large amounts of money for us to live here. They keep Hannah’s House going because they believe we can do it. We ought to believe as well.”

It is this trust and belief that she would like other young mothers to understand. Wohlgemuth sadly relayed a story of a young woman she knows who felt that the best way out of a crisis pregnancy was through abortion. The young woman has since had another child but always laments the death of her first baby.

“She still hurts for that baby that she aborted,” Wohlgemuth shared. “She wishes that she had just given up the baby for adoption. Knowing that the baby was alive somewhere, rather than having decided to have aborted it. … There are times when she just cries over that.”

Wohlgemuth believes that all life is a gift from God. She would like women who are pregnant and afraid to realize that “you are not alone. There are so many people out there to encourage mothers.”

In regards to Hannah’s House, Wohlgemuth said, “These people are always here for us, no matter what. There are so many words I could use to describe Hannah’s House, but I think ‘amazing’ is the one I like best.”