“Mary! I’ve been praying for you for months! Nice to meet you,” said her new co-worker with a welcoming smile. Heading into her first faculty meeting as a student teacher at St. Adalbert School, South Bend, last August, Mary Freeby encountered fellow educators who had heard her name but never met her face to face.

That happens to Freeby all around South Bend. “People come up to me and ask how I’m feeling, that even now they’ve been praying for me and my family,” she explained with tears in her eyes.

Freeby and her family are a living witness to God’s grace. Athletic and active, she wasn’t expecting it: paroxysmal nocturnal hemoglobinuria, which affects 1 in 1.3 million people, usually until their 30s or 40s. Freeby had yet to celebrate her 21st birthday.

“I started noticing symptoms in March of 2017 and the transplant occurred in November 2017. I had to remain in the hospital in Cincinnati until March 2018. After I got home, it was still another five months before I felt like I had truly recovered,” Mary said. 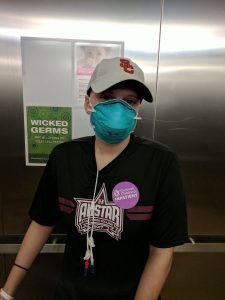 Freeby ventures out of her hospital room for physical therapy a couple weeks after receiving the transplant. Chemotherapy treatments for paroxysmal nocturnal hemoglobinuria erased her entire immune system, so she had to be careful.

Her mom, Diane, describes that time as “very surreal. I don’t remember panicking, but at the same time it was very hard to fathom the gravity of the situation, that our daughter had a potentially life-threatening disease. We did take it to prayer. Being surrounded by family and friends who prayed was a great source of strength. Even total strangers who heard about what Mary was going through told us they were praying. That was very powerful. I think being able to pray — not only for Mary and for our family, but also for her amazing medical team — gave us great peace.” 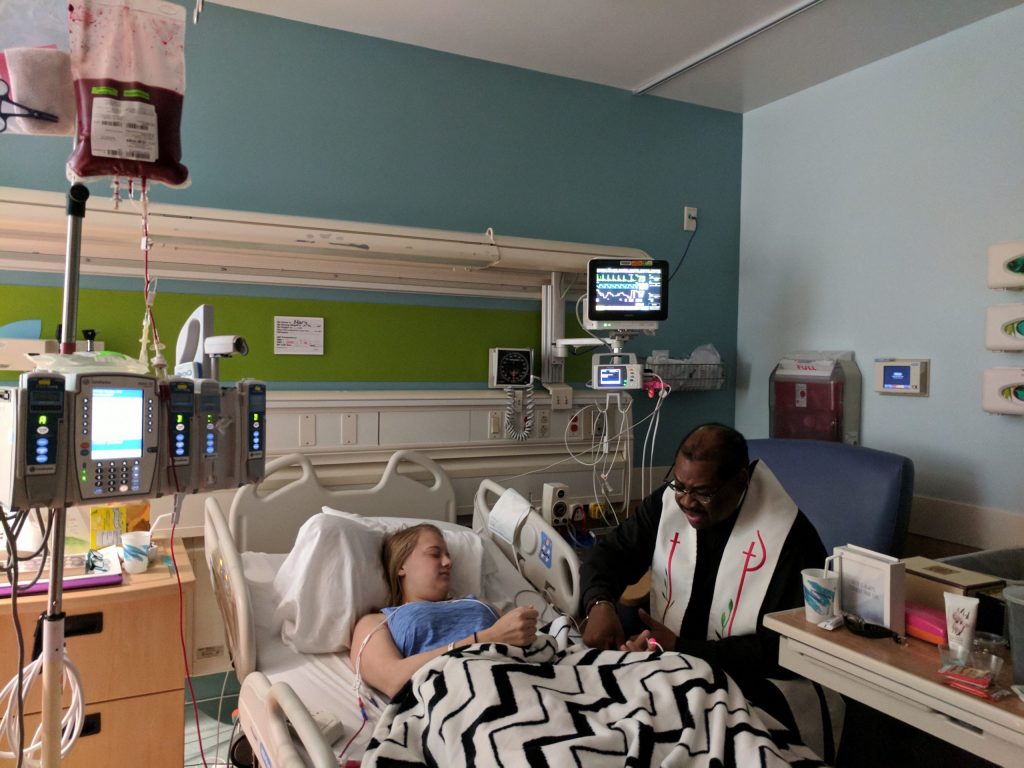 A Catholic chaplain at Cincinnati Children’s Hospital stops to pray with Mary Freeby of South Bend on transplant day, Nov. 14, 2017, and to bless the bone marrow cells provided by her donor.

PNH occurs because of a genetic change or mutation in the PIG-A gene of a single stem cell in bone marrow. Considered a “bone marrow failure” disease, PNH causes the body’s bone marrow to not produce red blood cells with a normal life span.

If left untreated, she was at high risk for blood clots and her own life expectancy would only be 10-15 years.

Dr. Colleen Morrison at Memorial Children’s Hospital had only seen one other case of PNH in her lifetime. Through the grace of God, she was able to diagnose Mary and walk with her the steps to healing.

The only known cure for PNH is a bone marrow transplant. Bone marrow matches are tricky, however. Patients can be waiting on lists for months to find a compatible match. The Freeby family and local schools, from Saint Joseph High School to Holy Cross College and the University of Notre Dame, offered bone marrow registries to help. With the hash tag #Marysmatch, a compatible donor appeared.

Normally doctors look for 10 markers to be in sync with the donor and recipient. Mary and her donor had 12.

In the coming year, she has resolved to personally thank her anonymous donor. “I just don’t think I can say what I want to say, so I’ve reworded it so many times.”

“The transplant has helped her to be able to trust God’s timing, something that was hard before. “I wanted to just go, go, go. Working three jobs, I was going to get here and do this … this is my plan … and He was like, ‘No. This is not your plan, here is what is going to happen.’ He put my life on hold completely and I had to wait, and it worked out. Everything worked out.”

Diane remembers those months with Mary, just the two of them, in the small hospital room or at the Ronald McDonald House.

“Mary was such a warrior, so positive and upbeat, that it was hard not to be the same way. As a family I think we quickly realized there really was no other option than to be optimistic and hopeful. And Our Lady seemed to be always present. Mary had made several pilgrimages to Medjugorje, as had (her father) Chuck and I and some of her siblings. I personally felt great peace and constantly drew on those experiences of peace and prayer.”

Diane’s relationship with the rosary changed during Mary’s treatment. “Mass was only offered at the hospital a couple times a week, and it was sometimes a challenge to attend. I did manage to explore Cincinnati on my own and visit the various parishes, and once Mary was well enough to leave her room, she would come with me. But mostly I relied on the rosary. It gave me great peace to just quietly pray it anytime, anywhere.”

Their family prayer changed, too. “We’ve always tried to say a rosary regularly, together in the evening,” Mary said. “As we’ve gotten older, it has gotten tougher with everybody in different directions. But once I got diagnosed, it increased. We had another reason to pray … it added an extra desire to do it, because we knew the benefits that could come from it.”

“The Eucharist was the reason I was able to keep any faith at all,” she added. There was one point where I hit an all-time low and I even began to ask God ‘Why is this happening to me? Why me?’ It’s embarrassing to admit, but unfortunately, it’s true. I was doubting God’s plan, I was mad at Him for making me go through all that I had to go through. I was giving up. For a while, it was just very dark and very hard.” 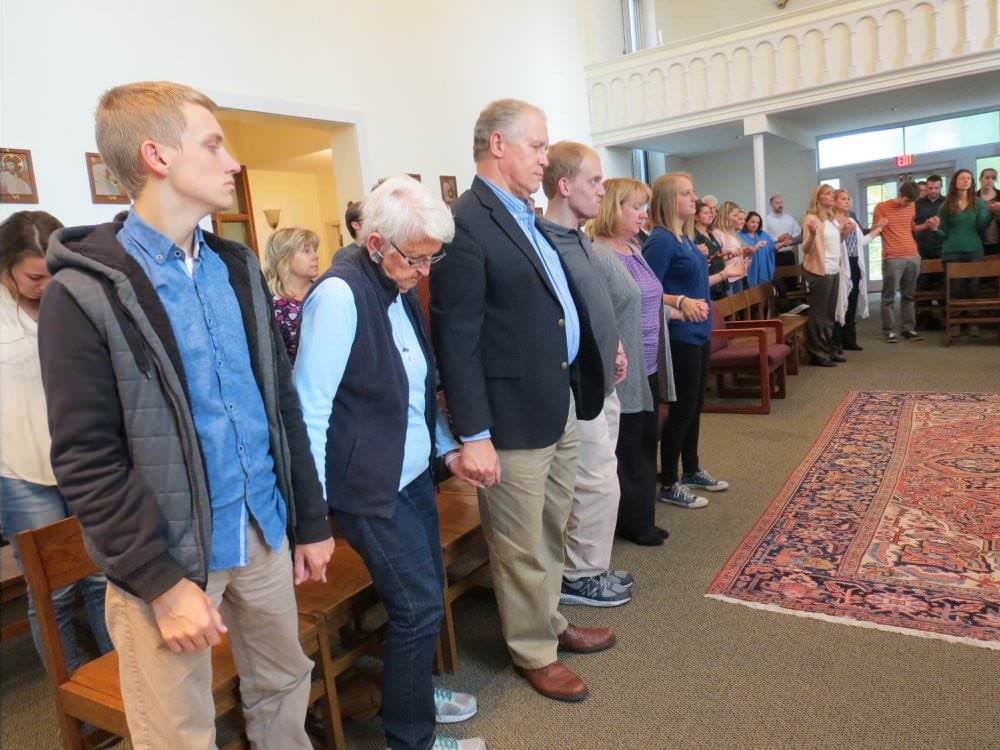 Photos provided by Diane Freeby
Family and friends of South Bend resident Mary Freeby gather in October 2017 to celebrate Mass and pray before she leaves for a life-saving bone marrow transplant.

The South Bend community demonstrated in word and deed great acts of charity toward the Freeby family. Trivia nights, basketball competitions, generous gift card donations, professional leaves and meal trains were organized and donated, and a GoFundMe page raised over $20,000 to protect Diane’s job and income so she could care for her daughter in the hospital. She still wakes up every day grateful for people’s kindness and prayer.

All of the family’s current and past educational communities also rallied to support Mary in prayer as well.

“If I had not been raised Catholic and been given the gift of a Catholic education, I would not have had nearly enough faith to have gotten through that,” said Diane. “It’s very hard to understand any of the mysteries of the faith, but having that Catholic education allowed me to at least understand the importance of having faith and it provided me with several examples of saints who would be able to guide me through tough situations like that.”

For Mary, St. Therese of Lisieux is one of those saints. Although she chose St. Therese at confirmation, it wasn’t until she was healing in the hospital that she came to learn and appreciate more about her. St. Therese, too, was very sick at a young age. Her “little way” of loving Jesus spoke to Mary, especially on the days that were empty of big gestures she could accomplish to help others. 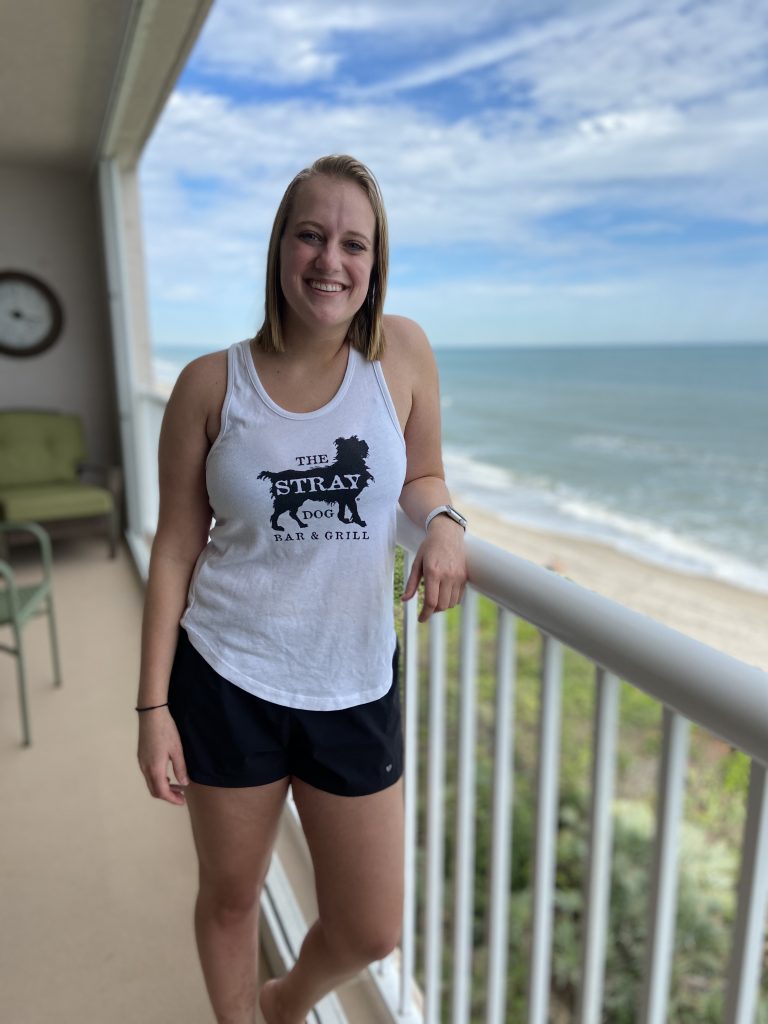 Now cured and healthy, Freeby traveled to Melbourne, Florida, in December on a Make-A-Wish trip provided by the Samantha Hickey Foundation.

Mary studied education at Holy Cross College, but with the sudden onset of her illness wasn’t able to student teach her senior year. Her professors allowed her to walk with her friends in May 2018 and complete her student teaching the following semester. Her friends even chose her to give the valedictory speech, just two months after returning from the hospital.

In the fall, Mary was student teaching first grade at St. Adalbert when she met co-workers who had only heard her name from prayer chains. The following spring, she substitute taught for the diocese and worked the front desk at Saint Joseph High School. Today she is in her first year as a classroom teacher, in third grade at St. Jude School, Fort Wayne.

She looks back on her illness and can see God’s hand in it all. “It’s so cool,” she shared with a smile. Most of all, she is grateful for the power of people’s prayers.

“When you’re praying for someone, you think that they don’t really know. Or you’re praying for them, it’s going to God and He’s taking care of it. But I felt it directly,” she shared. “I felt those prayers from every single person. Having that strong community praying for me and surrounding me, it was amazing!”