KOLKATA, India (CNS) — Since Christmas, the Missionaries of Charity have been strictly rationing the food and daily use items for their regular 600 beneficiaries at their motherhouse and Shishu Bhavan, a children’s orphanage. On Jan. 2, the breakfast of tea, bread and eggs was cut short by an hour.

“As long as you did it to one of these, my least brethren, you did it to me,” said Razia, a beneficiary of the Missionaries of Charity, as she waited for the nuns to give her the weekly provisions. She lives with her two sick children across the road from the motherhouse and says she visits the tomb of St. Teresa and prays for the “difficult times to pass.”

Abdul Razzak, a 45-year-old beggar, stays put outside the motherhouse curled in his rags. He has been staying there since Christmas in hopes of getting his share of food and medicine. A few others like him sit along with him to receive their subsidy from the nuns. Since the pandemic began, they received their daily meal from the motherhouse, but now, “Sisters told us that we might not be able to collect the food any longer,” said the sick man. 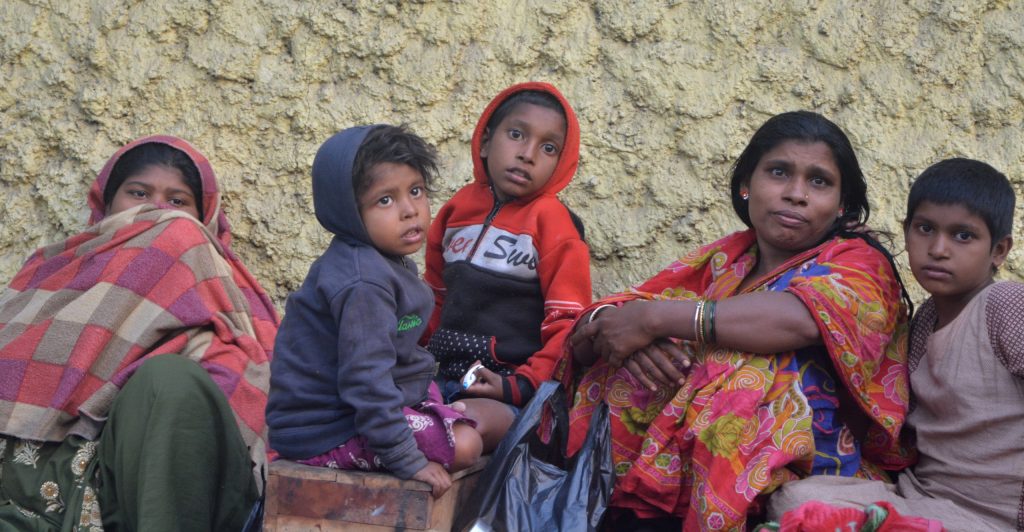 Children and their mother who live on the street wait outside the Missionaries of Charity motherhouse and orphanage in Kolkata, India, Jan. 2, 2022. Although the Indian Home Ministry has not approved the order’s Foreign Contribution Regulation Act, the nuns are hoping for some support from state governments. (CNS photo/Saadia Azim)

The Indian Home Ministry has not approved the Foreign Contribution Regulation Act license of the Missionaries of Charity on the grounds of some “adverse reports.” However, the nuns do not express their disappointment with the central government’s action and continue the routine of prayers and service.

A spokeswoman for the order said the nuns are looking into the lack of FCRA approval and will appeal the ruling.

But the uncertainty hanging on the fate of foreign donations has started showing in the organization’s everyday operations.

Sister Dominic Mary, a member of the Missionaries of Charity from neighboring Orissa state, told Catholic News Service that, “The state government of Orissa has confirmed that their supplies will keep going in these difficult times. … If other state governments also support us, maybe this phase will pass.”

Every Friday, Chotu, 5, Abdulla, 7, Sashi, 6, Gulnaaz, 8, all living by the street with their mother, collect food from the Shishu Bhavan. Their father is blind and lives in a makeshift wooden trolley, begging on the streets. In the winter, their only hopes of survival have been the Missionaries of Charity. They were expecting to receive the woolen blankets that did not arrive after Christmas.

“We might not get it this winter,” said their mother, Rosy.

On Fridays and Sundays, the poor line up to get their share of essentials at the motherhouse. The nuns have told them now that it might get difficult for them in the coming days.

In India, about 6,000 nongovernmental organizations — some as prominent as Oxfam — lost their FCRA licenses Jan. 1. When an FCRA license is canceled, the organization can appeal to the Home Ministry; with an appeal, the license remains valid for 180 days. Permanent cancellation of the permit then follows.

John Dayal, human rights activist and author, said: “The FCRA curbs are just a way to restrict humanitarian organizations to work independently in India. It is a kind of continued violence that’s played on the streets by goons and by the government through regulations and misinformation against Christians.”