Becoming a widow is “not any fun,” said Rosalie Waldon of New Haven, who lost her husband, John Charles, in January. Then the COVID-19 pandemic hit, leaving her stuck sheltering in place in her apartment.

The Widows of Prayer community in Fort Wayne has given her a new purpose and support system.

“They are a very prayerful group,” said Waldon, 86, who began attending Widows of Prayer meetings in early September. 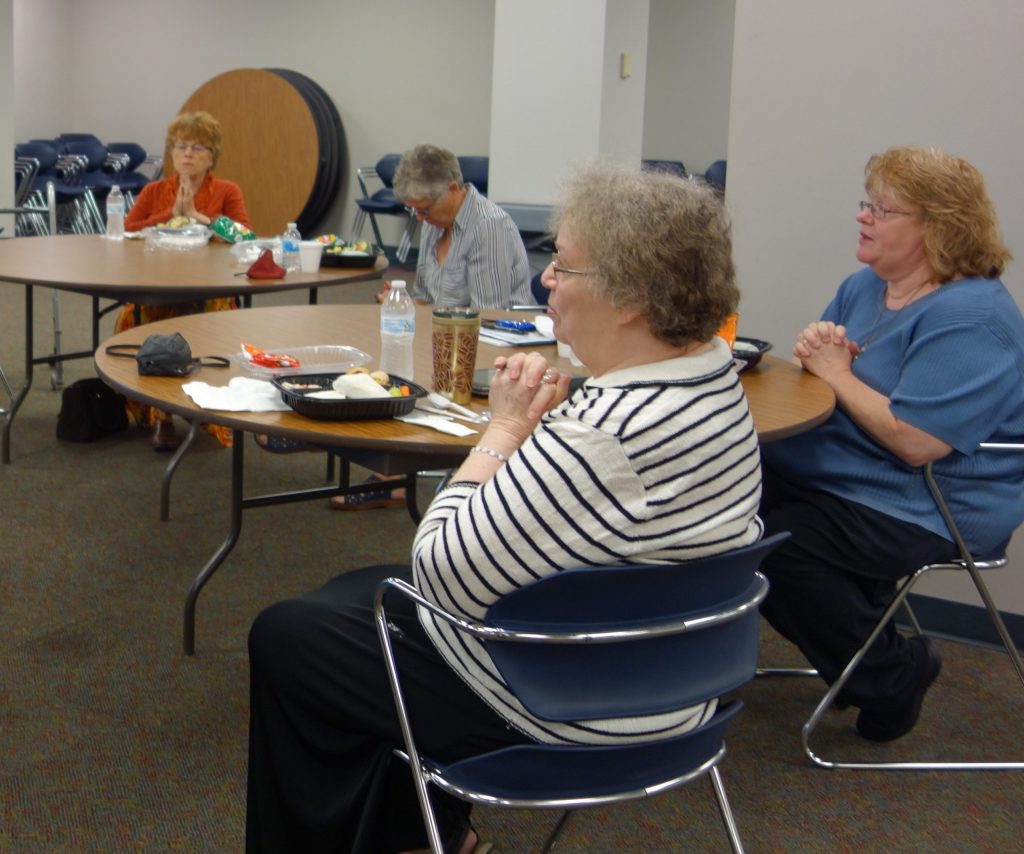 Kevin Kilbane
Catherine Fitzgerald of Huntington, center, is the servant leader of the Widows of Prayer community in Huntington and the national organization’s regional councilor for the Diocese of Fort Wayne-South Bend and state of Indiana. The community prays during a joint meeting Sept. 23 at the Archbishop Noll Catholic Center in Fort Wayne.

The organization is a private association of the faithful that offers a religious way of life for Catholic lay women who have been widowed, according to Catherine Fitzgerald of Huntington, the servant leader of the Widows of Prayer community in Huntington and the national organization’s regional councilor for the Diocese of Fort Wayne-South Bend and state of Indiana.

The Widows of Prayer communities in Huntington and Fort Wayne currently are the only ones in the diocese and in Indiana, Fitzgerald said. Members of the two groups held their monthly joint meeting Sept. 23 at the Archbishop Noll Catholic Center in Fort Wayne.

The Widows of Prayer organization, which was founded in September 1994 in Appleton, Wisconsin, also includes three communities of widowed women in Wisconsin, one community in Minnesota and one in Oregon.

Members’ mission is to serve Jesus Christ by praying for priests and Church leaders, being devoted to the Blessed Sacrament and promoting adoration of Christ in the Eucharist, it said on the organization’s website, widowsofprayer.org. Members also are devoted to the Blessed Mother, St. Catherine of Siena, St. Monica and St. Elizabeth of Hungary.

Women seeking to join a Widows of Prayer community go through a three-year process of discernment and spiritual formation. At the end of both the first and second years, the candidate decides whether to promise to continue discernment and spiritual formation. After the third year, a woman can decide to make a private vow of consecration to live simply, chastely and obediently as a member of the Widows of Prayer.

Though members commit to living a life of prayer and to never remarrying, they continue with other aspects of their lives, such as being a parent and grandparent and living on their own.

Widows of Prayer was introduced to this diocese when Father John Guimond, OFM Cap, came from Wisconsin in 2000 to serve as associate pastor at SS. Peter and Paul Parish in Huntington, said Fitzgerald, 81, who lost her husband, William, in 1992. When Father Guimond learned women in the parish hadn’t heard of Widows of Prayer, he organized a retreat day and shared information about the ministry and how women’s spiritual lives can grow.

He suggested the women think about it for a month and then they would get back together to talk about it, Fitzgerald said. Instead, she and other women went right over to the rectory to tell Father Guimond they didn’t want to wait a month to get started.

Fitzgerald later told her friend Sohn about Widows of Prayer. Sohn drove to Huntington to learn more about it.

“The ladies were so wonderful when I met them,” said Sohn, whose husband died in 1985.

She began driving to Huntington for meetings and bringing along three other widowed friends. The travel continued for two years and grew to three carloads of women from Fort Wayne. The decision then was made to have the Fort Wayne women start their own Widows of Prayer community.

In 2003, the groups petitioned then-Bishop John M. D’Arcy to allow Widows of Prayer in the diocese. Their request was approved.

The Fort Wayne and Huntington communities each normally meet weekly with their own members and gather together once a month for a joint program.

The COVID-19 pandemic has altered their usual schedules, however. The Fort Wayne group has begun meeting again from 9:30 to 11 a.m. Wednesdays at St. Mary, Mother of God Parish in downtown Fort Wayne. The Huntington group, which normally meets 2:30-4:30 p.m. Tuesdays, is waiting for SS. Peter and Paul to allow lay groups to meet at the parish.

Participation in Widows of Prayer has enhanced their spiritual lives, local members said.

“It changed my life when I became a Widow of Prayer,” said Marilyn Brown, 80, of Fort Wayne, who felt called to this vocation while attending an event at the Our Lady of Victory Missionary Sisters’ Victory Noll campus in Huntington.

“When you are called by God and know He loves you, things become easier,” said Brown, who lost her husband in 2010.

One woman said that after her husband’s death in 1997, she tried going to a convent in Kentucky and to a monastery run by nuns in Rapid City, South Dakota, but neither seemed a good fit. She began attending Widows of Prayer meetings a year ago and recently made her first-year promise to continue. Her family and the world need prayer, she said.

“What I really like about it is we all have about the same views,” added Davis, who became a widow 18 years ago.

Sohn said joining Widows of Prayer has had a huge effect on her life.

“I feel closer to the Lord, I really do,” she said. “I do a lot of extra praying for the world, for priests.”

She also volunteers in more activities that put her faith in action, such as helping at the St. Andrew Soup Kitchen in Fort Wayne and making rosaries.

“I try to live the way the Lord would want me to live,” she said.

More information about Widows of Prayer is available by calling Fitzgerald at  260-356-8021 or Sohn at  260-484-6300. Information also is available at widowsofprayer.org.