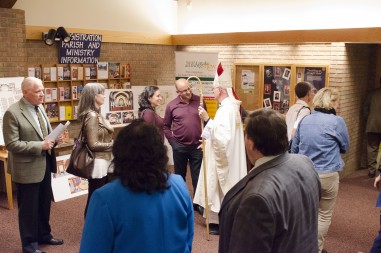 GRANGER — The roundtable discussion held after the annual White Mass at St. Pius X this Oct. 15 was an unusual glimpse into the understandings of life held by the three great Abrahamic faiths, expressed so poignantly in their respective end-of-life rituals.

The discussion was entitled, “End of Life Rituals and Traditions: Jewish, Christian and Islamic Perspectives.” Each member of the three-person clergy panel was asked to enumerate the rituals and understandings around dying in their own tradition and field questions from the gathering of medical and chaplaincy professionals.

Rabbi Michael Friedland, from Sinai Synagogue in South Bend, began the roundtable with a rich explanation of the “Vidui,” meaning “confession.” This prayer is “a liturgical expression on Yom Kippur, the day of Atonement,” which he said, “is also to be recited before death,” highlighting that “death is a form of atonement.”

It states, in part, “I acknowledge … that my life is in Your hands. May it be Your will to heal me. But if You will decree that I will not recover from this illness, I accept the decree from Your hands.”

To Rabbi Friedland, the above words voice a “recognition that we are not in control,” and help the patient come to terms with the fact that “healing doesn’t always mean curing.”

The following speaker was Father Henry Askwansa, chaplain with the ministry of spiritual care at St. Joseph Regional Medical Center. He highlighted that Catholic end-of-life rituals are “based on the fact that Christians believe death is the passing of the soul to the next world.”

The most common and well-known ritual is a sacrament known variously as the Anointing of the Sick, Extreme Unction or Last Rites, which is properly followed by “Viaticum,” a Eucharistic Communion that for the dying is “the last sacrament of the Christian life.” 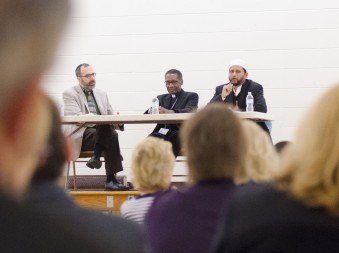 Nonetheless, Father Askwansa emphasized that the Anointing of the Sick is not meant strictly for situations in which death is immanent.

“Since Vatican II, the emphasis is not on dying but on healing — of mind, body and spirit,” he said. From a pastoral angle, Father Askwansa noted that it can take place at “a hospital, hospice house, at home or in an extended care facility.” For that matter, “it is good practice for parishes and churches to have this sacrament celebrated for the sick and elderly during the course of the year,” in order that it be available when the sick can still fully participate, “since it is for them.”

In this theme, Father Askwansa echoed Rabbi Friedland, who urged those even possibly approaching the end of life to pray the Vidui, “just in case,” and quoted a traditional Jewish saying concerning it: “Many have confessed and not died, and many have not confessed and did die. With the reward from your confession may you live.”

The final presentation was from Imam Sirajidan of the Islamic Society of Michiana. The Imam emphasized that although death is certainly “not a pleasant topic, not a topic of dinner tables or lunch breaks,” in truth the total human is not confronting its destruction, since “the human being in the Islamic understanding is immortal, non-perishable, with its body and spirit.”

Rather in death it is “passing” between “phases that we as human beings and animals go through”: The first is in the womb, when “the spirit is joined to the body and limbs are formed.” In the next phase, this life, humans go through a subset of phases, “just like through seasons.”

“When the fall of life comes, we pass to another phase, ‘life in the grave,’” when “the spirit is separated from the body,” and, even though the phase is penultimate, “in the Islamic faith we say that if this person was good and served God as ultimate truth and loved God and served Him and did not do evil, then his reward will start even in the grave.” Finally, there is the life of the spirit, in “our original place,” the “gardens, where Adam and Eve came from.”

Because of his divine origin, the Imam stressed the “dignity of the human being,” from which it follows that “honor to the body as it moves through the stages of life,” must be given. This entails refraining with respect to the body of the deceased, from “everything that hurts a living person,” including embalming and autopsy, although “there are exceptions.”

A very similar emphasis on human dignity was evident in Rabbi Friedland’s comment in the question-answer session that, human dignity ought to be respected even when a patient is close to death and perhaps comatose through simple courtesies like refraining “from talking about them as a third party in the same room.”