If all holy years are alike, each holy year is unique, for each one takes place in unique times.

Certainly, Pope Francis describes the Year of Mercy as “an extraordinary moment of grace and spiritual renewal.”

Still, making clear what is unique about the present moment, he writes: “The time has come for the Church to take up the joyful call to mercy once more. It is time to return to the basics and to bear the weaknesses and struggles of our brothers and sisters.” 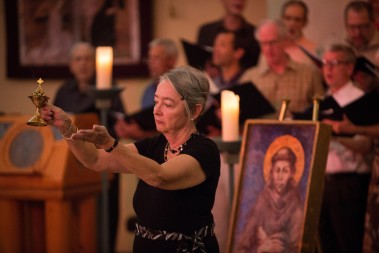 A Jubilee Year is made

(CNS) — St. John Paul II wanted the entire Church to enter the 21st century in a spirit of hope, strengthened by a deep-reaching renewal of faith. The new millennium’s arrival, he believed, signaled the start of a new stage in the Church’s history.

So in a 1994 apostolic letter titled “As the Third Millennium Draws Near” (“Tertio Millennio Adveniente”), he asked the Church’s people to begin preparing for a turn-of-the-century holy year, the Great Jubilee of the Year 2000.

This preparation would encompass a years-long period of reflection aimed at assuring that “the great challenge of the year 2000 is not overlooked.” From his pontificate’s very beginning, he considered this holy year “an important appointment,” St. John Paul said in January 2001, in his document “Novo Millennio Ineunte.”

“I thought of its celebration as a providential opportunity during which the Church, 35 years after the Second Vatican Ecumenical Council, would examine how far she had renewed herself in order to be able to take up her evangelizing mission with fresh enthusiasm.”

The pope particularly wanted Catholics to focus from 1997 to 1999 on the Trinity, revisiting the ancient teaching on “Jesus Christ and His mystery of salvation” in 1997 and in 1998 developing “a renewed appreciation” of the Spirit’s “presence and activity,” he wrote in “As the Third Millennium Draws Near.”

The pope urged that 1999 be devoted to God the Father. All Christian life “is like a great pilgrimage to the house of the Father,” who loves every human being unconditionally, he wrote.

He hoped that a “sense of being on a ‘journey to the Father’” would “encourage everyone to undertake … a journey of authentic conversion.”

With that final word, St. John Paul summed up every holy year’s purpose: “conversion.” Holy years are times for turning toward God in ways that make a great difference for life in the faith community and in the world.

The sacrament of Reconciliation is accented strongly during a holy year. Conversion is this sacrament’s goal. Turning from whatever is sinful, people now accept God’s invitation to pursue a renewed life.

God’s generous forgiveness of human failings also is underscored by the traditional holy year practice of granting indulgences, a practice linked with entering through the holy door of one of the Roman basilicas or of the cathedrals and churches designated by local bishops.

Pope Francis, describing an indulgence in his apostolic letter for the Year of Mercy, wrote that “in the sacrament of Reconciliation God forgives our sins, which He truly blots out.” But “sin leaves a negative effect on the way we think and act.”

The pope explained that “it becomes indulgence” on the part of God, who through the Church “reaches the pardoned sinner and frees him from every residue left by the consequences of sin, enabling him to act with charity, to grow in love.”

When Blessed Paul VI announced plans for the 1975 jubilee, he recalled how holy years developed historically and mentioned indulgences. He said:

“The jubilee was instituted by Boniface VIII in the year 1300 for a purely spiritual purpose. It consisted in making a penitential pilgrimage to the tombs of the apostles Peter and Paul. … In 1500, there was added to the jubilee the opening of the holy doors of the basilicas that were to be visited. This was intended … to symbolize easier access to divine mercy through the gaining of the jubilee indulgence.”

If all holy years are alike, each holy year is unique, for each one takes place in unique times.

Certainly, Pope Francis describes the Year of Mercy as “an extraordinary moment of grace and spiritual renewal.” Still, making clear what is unique about the present moment, he writes: “The time has come for the Church to take up the joyful call to mercy once more. It is time to return to the basics and to bear the weaknesses and struggles of our brothers and sisters.”

Pope Paul VI rather uniquely twinned the theme of renewal with the theme of reconciliation for the 1975 holy year. Reconciliation directly concerns “practical living,” he observed, since human lives and relationships are disturbed by so much disharmony.

Pope Paul wanted as many as possible to undertake a holy year pilgrimage to the tombs of the apostles Peter and Paul.

Christians on pilgrimage, he noted, come into contact with the ancient sources of the Church’s faith and life in order to be converted by repentance, strengthened in charity and united more closely with their brethren by the grace of God. 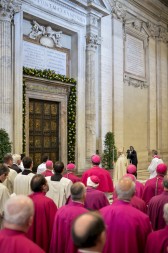 On proclaiming a holy year

(CNS) — The concept of a holy year finds its roots in Judaism when a special year of forgiveness and pardon  — a jubilee, if you will  — was celebrated every 50 years.

As Leviticus 25:10 explains, “You shall treat this fiftieth year as sacred. You shall proclaim liberty in the land for all its inhabitants. It shall be a jubilee for you, when each of you shall return to your own property, each of you to your own family.” The jubilee year celebrated forgiveness and returning to one’s home.

From the start, holy years have focused on the forgiveness of sins and have included indulgences (remission of punishment for sin) earned through penitential practices and pilgrimages to holy sites, particularly the four major basilicas in Rome. Participation during these holy years has historically been strong.

Dante’s “Inferno” mentions the number of pilgrims heading into Rome seeking the indulgence. In later years, the indulgences were extended to those who could not travel to Rome by allowing pilgrimages to holy sites within the individual’s home country or even home diocese.

One of the traditions of the holy year is the opening of the Holy Door at St. Peter’s Basilica. This tradition began in 1500 when Pope Alexander VI announced that the doors of the four major Roman basilicas that were part of the pilgrimage route  — St. Peter’s, St. Paul Outside the Walls, St. John Lateran and St. Mary Major  — would be opened simultaneously.

The symbolism of entering through each of the doors refers to the passage in John’s Gospel, where Jesus says, “I am the gate. Whoever enters through me will be saved” (10:9).

The celebration of a holy year was changed markedly by St. John Paul II during the Great Jubilee of the Year 2000.

First, he proclaimed three years of meditation on the members of the Trinity before the holy year began.

Second, he simplified the holy year rites and the requirements for gaining the offered indulgences.

Third, for the first time, other Christians were invited to celebrate that holy year with Catholics.

The ecumenical aspects and the loosened requirements for indulgences will continue during the Year of Mercy Pope Francis has called for, to be held Dec. 8, 2015, to Nov. 20, 2016.

In his letter establishing the upcoming Year of Mercy, Pope Francis has again established an indulgence for those who make a pilgrimage to the basilicas in Rome or, for those who cannot travel, who make a visit to their local cathedral.

In addition, while making this pilgrimage, the pilgrim is to make Confession, celebrate the Eucharist and pray for the pope’s intentions. These last three are traditional requirements for receiving an indulgence.

For those unable to travel  — the sick or elderly, and those in prison  — the pope offers relaxed requirements for celebrating the holy year:

“Living with faith and joyful hope this moment of trial, receiving Communion or attending holy Mass and community prayer, even through the various means of communication, will be for them the means of obtaining the Jubilee indulgence.” In so doing, the pope prays that all will “be touched in a tangible way by the mercy of the Father.”

In addition, the pope has offered an indulgence for anyone who performs at least one of the corporal or spiritual works of mercy  — feeding the hungry, praying for those in need, etc.  — during this year of grace.

One of the biggest changes of the Year of Mercy is the emphasis the pope has placed upon the Church and all believers to be missionaries of mercy:

“The experience of mercy, indeed, becomes visible in the witness of concrete signs as Jesus Himself taught us. Each time that one of the faithful personally performs one or more of these actions, he or she shall surely obtain the jubilee indulgence.”

(CNS) — Starting Dec. 8 and for the next year, we will hear much about the Holy Year of Mercy. Holy years come and go every 25 years but popes can and do, as Pope Francis has done, call for “extraordinary” holy years in between.

Mercy has been at the center of Pope Francis’ message as pontiff. When he announced the upcoming Holy Year of Mercy, the pope said:

“I have often thought of how the Church may render more clearly her mission to be a witness to mercy. … It is a journey that begins with spiritual conversion. Therefore, I have decided to announce an extraordinary jubilee that has at its center the mercy of God. It will be a Holy Year of Mercy.”