When asked what the role of Director of Religious Education (DRE) entails for the DREs in the Diocese of Fort Wayne-South Bend, Jonathan Kaltenbach, Diocesan Director of the Office of Catechesis, laughed and said, “I can just hear them all laughing now.”

That’s because DREs wear many hats, and the roles of each one varies from parish to parish. At small to medium-sized parishes, DREs are often involved in sacramental preparation, youth ministry, adult faith formation, and children’s religious education. Larger parishes often have these jobs divided among more staff members. 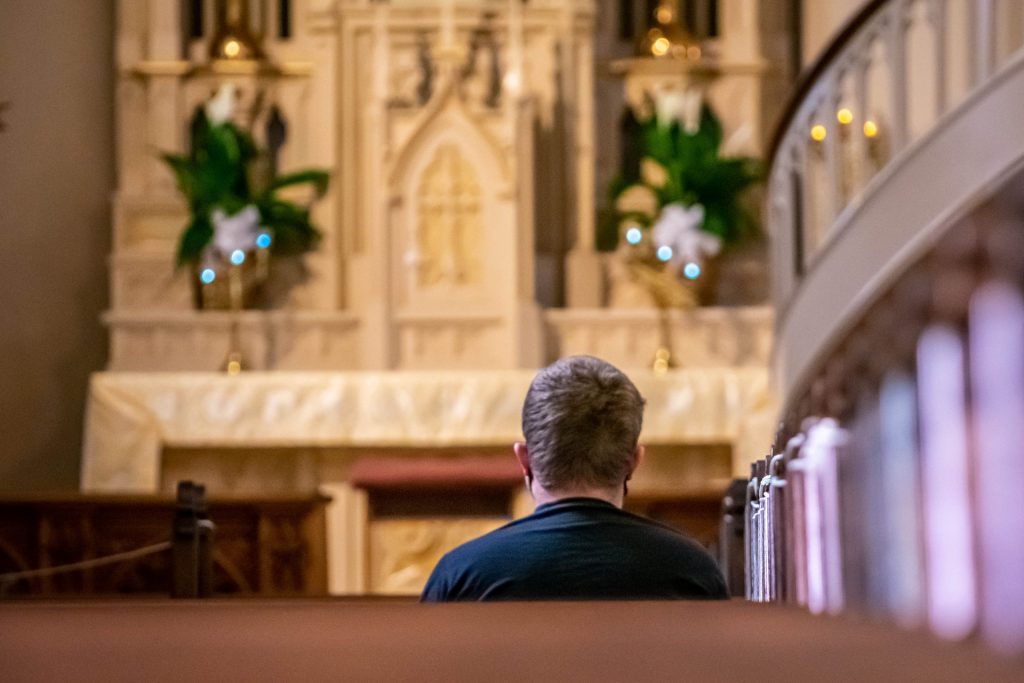 Sean Driscoll has been the Director of Religious Education at St. Joseph Catholic Church in South Bend since 2017. Talking with him, one can easily be amazed at the number of hats he wears: he is in charge of sacramental preparation for parishioners; coordinating religious education classes for families and students; coordinating adult faith formation programs, including RCIA; overseeing catechists; leading Catechesis of the Good Shepherd (CGS) Level I; and, since St. Joseph parish has a school, he is also involved in teacher formation, and the eighth-grade year-long service encounter called the Summons Project.

Established by former principal Melissa Green, the Summons Project is an opportunity for eighth-graders to both discover their gifts and discern how they might use them for the local community.

“The students reflect on the particular gifts they have, such as a love for working with children, working with their hands, being outdoors, or being present to people,” Driscoll said. “Then we invite several community partners, such as Hope Ministries and Catholic Worker, to present their mission to the students, who then figure out where they want to serve.” Following this, the students each engage with a community partner at least monthly for six months, keeping a journal throughout.

“It’s meaningful and builds relationships with the community they serve,” Driscoll added. “It builds in the students an attitude of service as something that is very natural and is a profoundly natural outpouring of Christ in our lives.”

His involvement in the Summons Project is very fitting, seeing as the role of DRE requires both the knowledge and utilization of his own gifts as well as those of the parish community, matching these gifts to needs. “Much of my job is knowing who to ask to do what,” Driscoll explained. “I’m at this stage in my time at St. Joe where I can do that effectively. I know a good portion of the community and where people’s gifts are. I’m responsible, but I’m not meant to do everything by myself. I’m a point person to rally gifts and personnel in the community to carry this out in a fruitful way. I’m blessed with a very supportive network.”

At the diocesan level, Kaltenbach remarked that he is grateful for the experience, interests, and gifts that each DRE brings to the role. This unique mix creates what he called, “a beautiful mosaic of gifts offered to the Church.”

Christians are each called to witness to the faith; to be faithful to prayer and to tending the soil of their lives in Christ through sacraments and formation; to live in community with the body of believers, sharing time, talent and treasure; and to both bring and accompany others in life in Christ. The way each person grows in these areas and lives out their callings varies, so it’s no surprise that the role of DRE within the diocese does not have a general requirement for candidates apart from being a practicing Catholic who is invested in handing on the faith.

“Broadly speaking, catechesis is something we all do as baptized Catholics and members of the Church to hand on the faith and echo Jesus, the Word of God,” Kaltenbach said. “Our directors of religious education each have quite a bit of their own wisdom and experience from their own formation. The proportion of elements of formation in the four basic areas of intellectual, human, spiritual, and pastoral may differ, and there are other skills and talents that each brings to the role.”

For Driscoll, his path to this position began at the University of Notre Dame. While studying to be a chemical engineer, he became involved with campus ministry. After participating in Notre Dame’s Vision program, which gave him direct pastoral experience, he joined the Echo program – a graduate service program to form lay ministry leaders through work and study within the community – and realized a calling to lay ministry.

“Echo very directly prepared me for the role of DRE,” Driscoll said. “I greatly value the communal formation I received and the experiences around it. In hindsight, this is what God prepared me for all along.”

As a step towards continuing formation, the diocese offers a basic catechetical course which new DREs are encouraged to complete, and which is free and available to anyone. “Foundations of Faith” is an eight-unit course, offered in four-unit biweekly sessions in the fall and spring. There is also an option to complete the course over two consecutive summer programs which are each one-week long and cover four units. Topics covered through “Foundations of Faith” include: prayer and worship, revelation and scripture, the sacraments, and life in Christ.

At St. Joseph, Driscoll helps to facilitate continued formation for the school teachers. “Teachers do so much day in and day out in educating our children and being a witness to them,” he said. “The grade school is the largest ministry of our parish. They’re not just educating — they are forming young disciples of Christ. We can’t ask them to do something that they themselves aren’t being formed in as well.”

“Without overflowing their plates, we offer them more time for prayer and being fed in a spiritually formative way.” To this end, faculty meet every five to six weeks for communal prayer and Mass together. Then they hear a talk or witness sharing from either Driscoll or a priest. Last year’s topics aligned with the theme “Pillars of Holy Cross.” This year’s theme is the Eucharistic Revival.

The role of the Holy Spirit working within the parish community and his own life is something that Driscoll can see looking back, and leans into as he moves forward. “It’s a cultural mentality at St. Joe that the work we’re doing is not our own,” he said. “If it were, this would be a dramatic failure. We do our work, and engage in the necessary formation to do the work, but the Holy Spirit is going to do His will through us.”

At the diocesan level, Kaltenbach also points to his gratitude for the Holy Spirit and the community of directors with whom he is privileged to work. “I’m grateful to get to work with our current DREs. I’m grateful for their service, ministry, reciprocity, and willingness to serve. It really is a blessing for me to be able to support them as best as I can in their ministry. They’ve supported me at the diocesan level as well.”

“Prayer and spiritual life is the foundation of life, and ministry,” Kaltenbach added. “Like the rest of the Christian life, ministry is full of its crosses and full of its joys. Only the Holy Spirit will give us the strength to bear those crosses and see those joys.”