University of Saint Francis projects will promote the ‘dual Catholic priorities of faith and reason’
Click here for more photos.
The University of Saint Francis took a powerful step toward further defining its mission and calling on July 24, by launching dual and simultaneous construction projects: a standalone chapel and an addition to and renovation of Achatz Hall of Science. 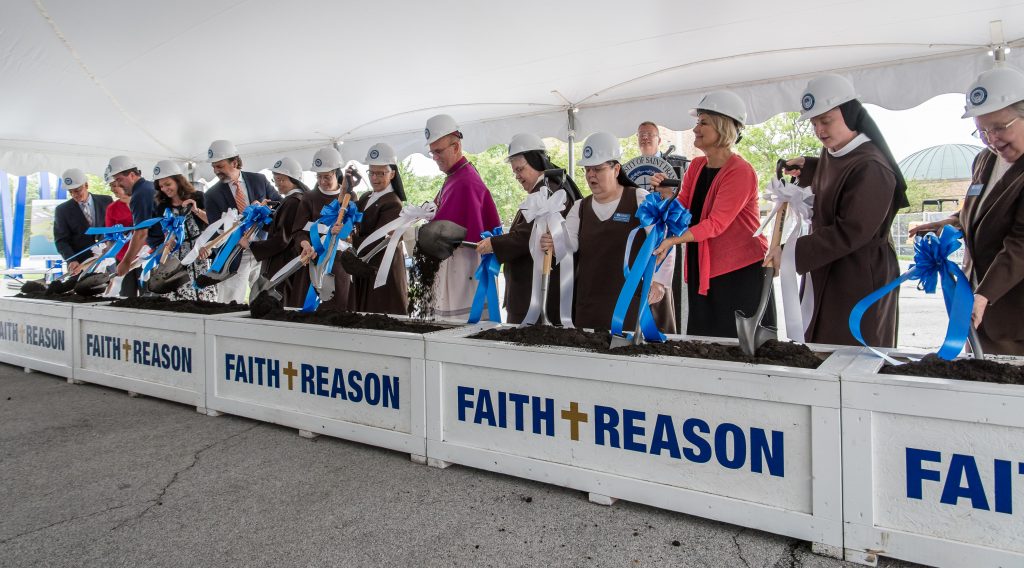 Bishop Kevin C. Rhoades, center, joins several Sisters of St. Francis and University of Saint Francis partners and dignitaries in turning over shovels of dirt during a ceremonial groundbreaking for two construction projects that will begin immediately on the campus of the Fort Wayne school. — Photo by Joe Romie 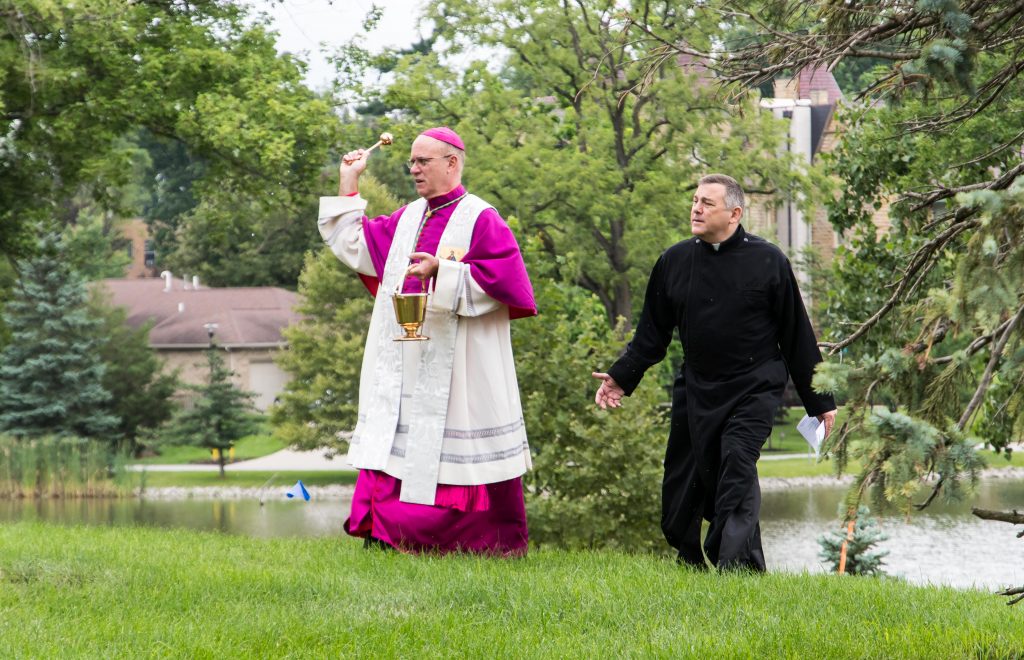 Bishop Kevin C. Rhoades, accompanied by Father David Meinzen, campus chaplain for USF, sprinkles with holy water the site near Mirror Lake where a new campus chapel will be built and Achatz Hall of Science will be renovated. — Photo by Joe Romie

The $22.7 million Faith & Reason Capital Campaign broke ground at 9:30 a.m., when dignitaries from the university and the Diocese of Fort Wayne-South Bend, city of Fort Wayne, Sisters of St. Francis of Perpetual Adoration, project construction partners and others gathered at the Spring Street campus for remarks and a formal ceremony.

USF’s board of trustees gave the initial go-ahead for the Faith & Reason Capital Campaign on April 25 of this year, the 75th anniversary of the educational institution’s move from Lafayette, Indiana, to Fort Wayne.

“Preparing leaders for the world’s complex challenges demands new and flexible capacity,” the project website explains. “Additionally, teaching strategies, scientific research and technology are constantly changing. With the construction of a new chapel and the expansion and renovation of the science building, the project intends to enhance its core strengths of faith and reason.” Both are at the heart of the university, several of the day’s speakers mentioned, which prompted the name of the effort.

At the beginning of the ceremony, Bishop Kevin C. Rhoades blessed both nearby construction sites with holy water. In his remarks he referenced the appropriateness of the campaign’s name, and said the new chapel and improved and expanded science facility would “bear witness to the harmonious assimilation of one into the other.”

The current university chapel is a small facility located in a former half-gymnasium in Trinity Hall, an administrative building that also houses the school’s cafeteria and is conveniently located in a heavily trafficked part of campus. The new St. Francis Chapel will be a freestanding, 7,000-square-foot structure that seats about 250 — triple the capacity of the current chapel, according to university president Sister M. Elise Kriss — and provides easy access for all members of the campus community to the celebration of the Eucharist, prayer and reflection. The larger space will eliminate the frequent problem of students standing at the back during Masses and is also expected to ease constraints involved with taping the weekly Fort Wayne-area televised Mass from the location.

Among the chapel’s architectural distinctions will be a cupola that “lets shine the light of Christ in all directions,” as Sister Kriss noted, and is visible from nearby Spring Street. The look of the interior will be directed by an experienced sacred space designer and will include a separate adoration space and a choir loft. Its location in the same part of campus as Trinity Hall, and in direct line of sight of the front doors and atrium of Achatz hall, “was chosen to be visible and accessible to students as they walk to and from class,” she said. “The beauty of the chapel speaks of the attraction of God himself. The splendor helps to draw us into his presence.”

The chapel’s emblematic presence along Mirror Lake will also lie in direct line of sight of what will soon be the new main entrance of Achatz hall, whose expansion and modernization will further strengthen the university’s already high-quality and in-demand science and health care programs.

Built in 1968, Achatz hall has been modified multiple times to keep up with the changing demands of science education. The latest expansion and renovation will significantly modernize the building and highlight the university’s high-quality and in-demand science and health care programs. Phase 1 of the construction is an addition extending toward the chapel that will be lined with windows to facilitate the view; that phase is expected be completed at the end of 2018. Once Phase 1 is complete, renovation of the existing space will begin. This phase is expected to continue through 2020. By that time, the university will have 12 laboratories, including biotech, microbiology, anatomy and physiology, computer, organic and chemistry, customized to the specialized needs of today’s science-related technology and pedagogy.

Achatz Hall of Science will include other student-friendly features like a green roof, second-floor outdoor balcony and study spaces in the first and second-floor atrium that have a view of the chapel, Mirror Lake and other campus buildings.

The impact of the projects “will significantly transform our campus environment,” said Sister Kriss, and “be a visible sign to students and our community that USF is ready to prepare them for their vocation.” Fundraising for the campaign will continue throughout the construction timeframe.

Special guests and participants at the groundbreaking included Sister Angela Mellady, provincial superior of the Sisters of St. Francis of Perpetual Adoration; members of the USF campus community and its board of trustees, including chairman Bill Niezer; Fort Wayne Mayor Tom Henry; donors to the project; and members of the Chapel Planning Committee.