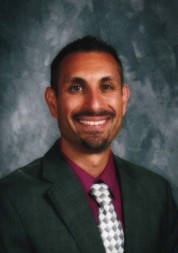 For the past nine years, George Azar worshipped in the wooden pews of St. Joseph Church, South Bend, as parishioner, father and husband. He served on the parish school board and school technology committee. This spring he added a deeper dimension to his faith and was received fully into the Church after completing RCIA. In July Azar began another role at the parish, that of principal of the grade school.

Born in Sweden of Palestinian descent, Azar grew up in South Bend speaking Arabic as his first language. After attending Indiana University, Bloomington, and majoring in biology with a business minor, he worked in business in Indianapolis, where he also met his wife.

The couple moved to South Bend, where Azar furthered his studies at IUSB and obtained a master’s in secondary education. He began working odd jobs in the South Bend city schools, and found a niche teaching biology at John Adams High School. Azar then moved into administration and completed his administrator certificate at Bethel College. He worked as a principal at Rise Up Academy for three years, helping to turn around a school that was previously on probation. Most recently he completed a successful three-year stint as principal at LaSalle Intermediate Academy, the only public school in South Bend to receive Indiana’s four-star status during that period.

Serving in a Catholic school will be a first for Azar. He is most looking forward to practicing his faith and craft at the same time, he said. He finds many similarities between public and Catholic schools, but is looking forward to strengthening the Catholic identity of the grade school by continuing to practice the Holy Cross Congregation pillars and vocational curriculum. “This work will build from years of focused and intentional work in our faith formation,” he noted.

It was “God’s will alone” that he came to the new position, Azar said. This year he plans on establishing relationships, fostering faith and getting a good understanding of what everyone does at St. Joseph School. “I’m ready to jump in together and learn together.”

“As we all move into the next school year together, let us remind ourselves of one of my favorite quotes by Pope Francis: ‘God is not afraid of new things,’” he added.

“We feel blessed to have found a principal who brings so much experience to St. Joseph. While we certainly miss Mrs. Wiwi, who retired as principal after 27 years, we are looking forward to the vision and zeal Mr. Azar brings.”

Azar and his wife, Joanna, are active parishioners of St. Joseph Parish. They enroll their four young children in the parish’s grade school and preschool.

After teaching numerous grades, serving at a variety of schools and with a wide background in instruction and curriculum, Karen Bogol steps in to her first administrative leadership role. Her depth of educational exposure has prepared her to serve as principal of St. Anthony de Padua School, South Bend.

Bogol’s personal background is similar to her professional one. Her father was in the Air Force, so the family lived in a variety of states. She studied elementary education for her undergraduate and master’s degrees from Ball State University. Afterwards she worked in the Muncie public school system, then taught at St. John the Baptist, South Bend, for five years. For the past three years Bogol served as a teacher at St. Anthony, where she focused on fifth grade math. She also served on new programmatic committees of school culture and assessment, as well as the committee on math instruction and curriculum.

She has twice received the prestigious Light of Learning Award from the Diocese of Fort Wayne-South Bend.

When the St. Anthony position became available Bogol spoke with her supervisors and family, all of whom encouraged her to take the natural next step on her professional path. With an energetic and upbeat spirit, Bogol has a positive vision for the whole school community. She plans “to continue the exciting initiatives and progress we have been making over the past few years.”

She also looks forward to working with the St. Anthony community on a different level.

“I am excited to be able to interact and connect with the student, families and teachers across grade levels and in various activities,” she said. Having taught kindergarten students as well as older third- and fifth-graders, Bogol understands how every grade is unique.

During her first year Bogol hopes to keep the momentum and energy going at St. Anthony school. She hopes to continue on a good path with NWEA assessment, STEM program and community building with staff and students’ families that was begun by the past principal, Tom Hamilton, and current assistant principal Allison Taylor, she added.

Father Dave Ruppert, pastor of St. Anthony de Padua Parish, said, “Karen is passionate about her Catholic faith and education. I have great confidence in her ability and desire to lead our school.”

Supporting the strong Catholic identity at St. Anthony is important to Bogol.

“There’s a “rich faith community we already have in place at Saint Anthony’s. Our school attends Mass twice weekly, participates in student-led prayer services, has an adoration club and incorporates prayer throughout the day.

“More personally, I want to model the behaviors I love to see in our school community — including love, peace, joy, patience, kindness, gentleness and self-control,” she continued. 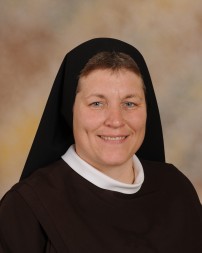 Coaching boys’ and girls’ sports since she was 15, Sister Gianna Marie Webber, OSF, has always had a natural gift of leadership. From the sports arena to the spiritual field, she also seeks to follow God’s will. This year she was named principal of St. Matthew Cathedral School, South Bend.

Originally from Columbus, Ohio, Sister Gianna Marie played high school basketball and attended She attended Mount Vernon Nazarene University in Mount Vernon, Ohio, receiving a bachelor’s degree in physical education and health. She began her professional path as a high school teacher and varsity coach of high-risk students in Alaska. She later moved back to Ohio, where she worked in the business field for four years.

Sister Gianna Marie joined the Congregation of the Sisters of St. Francis of Perpetual Adoration in 2004. During eight years of formation, Sister Gianna Marie studied for a master’s in educational administration at Franciscan University of Steubenville, Ohio. She professed final vows four years ago.  Her first formal leadership role was as principal of St. John the Evangelist School in St. John, until 2015.  She has been serving as assistant principal of St. Matthew Cathedral School for the past year.

In her first full year as principal, Sister Gianna Marie is looking forward to working with the new parish staff and the school’s “wonderful faculty and staff.”

“I’m also looking forward to meeting the families as we build together a positive atmosphere for the students who God wishes for us to serve,” she said. “God has blessed me in abundance with His graces, and I look most forward to sharing His love.

“My primary goal is to serve the Lord in all things,” she continued. “I love the mission of Catholic schools, which is to develop the whole child, most especially drawing children closer to the Lord. I believe that happy teachers make happy kids, and happy kids make good learners: all of which help keep happy families. With this is mind, as a principal, I hope to engage my teachers and staff in presenting an environment of enthusiasm, joy, and purposeful learning all centered on God’s love.”

To foster and strengthen the Catholic identity of the school, many changes have been implemented. First, a new position was created: director of Catholic culture and life. Also, Father Fisher said, “we were blessed to hire an assistant principal, Dr. Lindsey Esbensen, who has her doctorate in moral theology.” The middle school and junior high has been restructured to best improve religious and literature instruction, and a Catholic Identity Committee was added and designed by parishioners to support the school’s mission.

In addition to these important, bold steps that are already in motion, Sister Gianna Marie asked, “Together, let us entrust this year to our Lady, Mother of Mercy.”