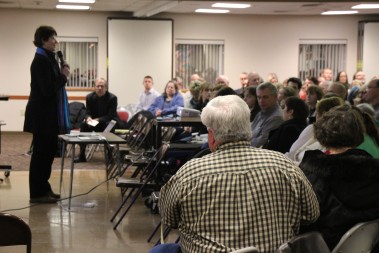 Sherry Weddell challenges an audience of near 200 faithful with her message of intentional discipleship during a talk at St. Elizabeth Ann Seton Parish in Fort Wayne on Jan. 28. Weddell presented some startling facts on the current shift in religious identity and also provided an outline of steps Catholics can take to make a deliberate decision to follow Jesus as a disciple.

FORT WAYNE — Nationally known speaker and best-selling author Sherry Weddell challenged an audience of nearly 200 faithful from around the area who braved the frigid temperatures to hear her message of intentional discipleship at St. Elizabeth Ann Seton Parish in Fort Wayne on Jan. 28. Weddell not only presented some startling facts on the current shift in religious identity but also provided an outline of steps Catholics can take to make a deliberate decision to follow Jesus as a disciple.

The presentation, sponsored by Our Sunday Visitor, opened with an introduction by Greg Erlandson, president and publisher of Our Sunday Visitor publishing division, and an opening prayer by Father Ben Muhlenkamp, parochial vicar of St. Elizabeth Ann Seton Parish.

Weddell, author of “Forming Intentional Disciples: The Path to Knowing and Following Jesus,” (Our Sunday Visitor, 2012), engaged the assembly with surprising statistics on the fluidity of religious identity around the world today. She noted that the majority of American adults have left the religion of their childhood. And the majority of Catholics are not certain one can have a personal relationship with God. Though there is a “capacity to believe” one must perform an “act of faith,” Weddell said, making a free choice for God.

One of the markers of current Catholic parish culture is the pressure to “not talk about (faith)” said Weddell, who added that that pressure causes Catholics to suppress the expression of their discipleship. Statistically, of practicing Catholics, 62 percent are less likely to talk about their faith. That, stated Weddell, stifles evangelization at the most basic level.

A pyramid divided in three sections including seeker, disciple and apostle illustrated Weddell’s message that a Catholic who has talked about the faith, shared their conversion story and the story of Jesus Christ and integrated that faith into their lives live a mature faith. And, when that mature faith is witnessed fully shared and discerned by others, intentional disciples are born.

Weddell spoke of how gifts discernment helps the faithful move from someone who follows Jesus to someone who is being sent by Him. “God has anointed you,” Weddell told the crowd, “with gifts and a mission. He gives you the grace and power to go out.”

Unfortunately only 1 percent of vocations are being lived, noted the speaker.

Most parishes are in the early and passive seeker stage of the process of discipleship, said Weddell, who charged those assembled with the “Double in Five Challenge,” saying, “What if you set out to double the disciples in your parish in five years?” Parish and diocesan life would be transformed around the country, she speculated.

She offered these tips to discern as a means of sharing faith at the parish level.

“Break the silence,” she offered. “Talk of the personal relationship with God who loves you. Talk especially about Jesus Christ,” Weddell suggested, adding, “Inquiry is important… our job is to help people fall in love with Jesus and His Church. Ask others about their lived relationship with God. ”

Offering opportunities to encounter Jesus in the Church is paramount she said, which can include RCIA, parish based retreats and processes. “Everything we do in the parish can be tweaked to evangelize,” she said.

Weddell cautioned to expect conversion and prepare for it and to lay the all-important foundation of intercessory prayer. “For the spiritual renewal of the church community,” she noted, “It will change the atmosphere!”

Among the crowd composed of clergy, lay ministers and faithful, was Annie McCrory, long-time parishioner of St. Elizabeth Parish and a member of the RCIA team. McCrory said her focus was renewed by Weddell’s talk.

“It was a good reminder to have those seeking to be Catholic to fall in love with Christ first and then the Church. We must focus on the love of God,” she said.

Marti Trout from St. Vincent de Paul Parish in Fort Wayne, who had recently finished reading Weddell’s book on intentional discipleship, praised the message, saying, “We do need disciples. It changes the world. The life and joy of a Christ-centered Church is wonderful.”

Father Muhlenkamp was “encouraged to know that we can make little steps and get back to the basics — Christ wants a personal encounter with you! If we could engage 10 percent …wow! We have to be prayerful for this to happen. That brings a lot of hope.”

Weddell, who joined the Catholic Church as an adult, co-founded with Dominican Father Michael Sweeney the Catherine of Siena Institute to equip parishes to form lay Catholics for their mission in the world. She leads its international team of teachers as well. Weddell also created the first gifts discernment program.