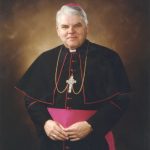 The ministry to Hispanic Catholics and the church universal
It is a great joy to be with our Hispanic Catholics. I learned only recently, that while most of those who have joined us are from Mexico, we actually have Hispanic Catholics with their great spiritual heritage from 19 countries plus, of course, Puerto Rico, which is part of the United States. We are blessed to have a number of priests, some of them from our diocese, who are fluent in Spanish. So it was a joy on the great solemnity of the Assumption to go to our still new Our Lady of Guadalupe Parish and Shrine in Warsaw to help the Catholics in that area, including many from St. John’s, Goshen, close a beautiful festive day in honor of Our Lady. I ate three tacos and marched in a procession in the evening heat; and we concluded with Benediction of the Blessed Sacrament.

A week later, I joined well over 1,000 Hispanic Catholics, a large number of them from St. Patrick Parish, Fort Wayne, along with Father Tom Ascheman, SVD, and Deacon Fernando Jimenez, soon, thanks be to God, scheduled to be ordained a priest for the conclusion of a weekend of prayer and renewal held at Bishop Luers High School. Many had come from Columbus, Ohio, and Indianapolis; but most were from our diocese. There were presentations and prayer and the sacrament of penance. I concluded by celebrating Mass in Spanish, the language which I hope eventually to learn.

A visitor from Benin and Togo
Archbishop Michael Blume, SVD, is the apostolic nuncio to these two tiny African countries. He is a missionary with the Society of the Divine Word, and how fitting that we have been blessed with two outstanding priests of this splendid missionary congregation who take care of historic St. Patrick Parish, Fort Wayne. Archbishop Blume was ordained by our own beloved Bishop Crowley many years ago in his parish church of Our Lady of Hungary, South Bend. The archbishop recently came to my home in Fort Wayne for Mass and lunch, and later joined some of our staff for cake and ice cream celebrating my birthday. There we learned of his excellent work in these far away lands. It was evident that he is in those small countries not primarily as a diplomat, but as a pastor.

He told us how people who are mentally ill, but can do fine with medication, are often left out in the woods tied to a tree. He found a very devoted young man who had worked hard to take care of them to see that they take their medications, and how many of them have been brought into the mainstream of society. He told us how some young children are called witches, because of the physical manner of their birth or something that happened in early childhood; and how he had worked with the bishop to rescue them, and see that they were taken care of.

He joined a club at Our Lady of Hungary School years ago, entitled simply “A Club for Seminarians.” Then a missionary priest arrived at his door; and now, his vocation first grasped, very dimly, at Our Lady of Hungary Parish in South Bend, is being lived out in missionary countries with poor roads and primitive practices in a far away place. Please keep him in your prayers.

The growth of religious life
Something to be very much prayed for, and hoped for, is that the charism and gift of religious women will once again flourish in our church. It is not possible to fully grasp what consecrated women have meant in our diocese over the years. So it was a joy to preside and receive the final vows of Sister Margaret Mary, OSF, on the feast of St. Clare at the Franciscan Sisters in Mishawaka. A large number of priests and seminarians were present. So many young people. This congregation has 16 young women in formation. Most of our seminarians were there. The young Franciscan novices, who have their novitiate on the grounds of Marian High School, down the hill, were present. It would remind one of the words of Pope John Paul II, who, in an act of faith, looked forward to “a new springtime” for the church.

Such a phrase does not mean the church will be without struggle. There will always be struggle. There will always be attacks from the power of evil against the life of faith. But grace is stronger than sin; and goodness will overcome evil; and evil will never have the last word. We live in hope, and there is much hope in the beautiful chapel on the hill where there is prayer and adoration of the holy Eucharist around the clock every day.

For the 23rd time
It is hard to believe; but I have just attended for the 23rd time, the initial events marking the beginning of another Annual Bishop’s Appeal. How well I remember the winter morning when I arrived in Warsaw to greet the committee of priests and laity that had proposed this event. It has made it possible to do so much. Improving salaries for teachers. Grants for young people so they can attend our schools. The education of priests. The strengthening of the parishes from the fiscal and pastoral point of view. Assisting the poor. We watched our new video and together began our annual journey. It will be especially important to try to equal what we did last year — “the second highest ever,” because of the economy and the needs, which are growing.

Advancement for our deacons
The 11 men who are in formation for the permanent diaconate received the order of reader or lector at the Cathedral of the Immaculate Conception on a recent Sunday morning. This is the first such class in my years as bishop. They have completed 2-1/2 years of intense study, and have a significant time yet to go. Each one has a spiritual director. The process of discernment continues as they determine whether or not they believe God is calling them to this vocation; and the church reflects through prayer and evaluation as to whether or not the vocation is truly present. Please keep all of them in your prayers.

The church of St. Peter, the Apostle
Throughout the country, great urban parishes are closing or being merged. We have an extraordinary exception in the beloved St. Peter, Fort Wayne. I celebrated Mass to observe the completion of this work with the replacement of the tower on top of the church under the expert guidance first of Father John Delaney, and more recently, of Father Phil Widmann. This church has been completely restored. A new hall called the Pavilion has been built. This renewal has been accompanied by the restoration of the neighborhood with new homes, and a new library, and a clearing away of old houses. Parking has been improved. Street lighting has been introduced, and the whole neighborhood has revived. St. Peter Parish was founded in 1872 with the church dedicated 20 years later.

The church was nearly full for a Saturday afternoon Mass. What was formerly the school is now a residence. I thank these two priests for what they have done; and it was a joy to celebrate this Mass, and think of all the great history of St. Peter’s. A novena to the Sacred Heart began in 1941 when the boys went off to war and was held every night for over 20 years.

You will find elsewhere in this edition a copy of an article, which I wrote for the national Catholic magazine, America, a journal to which I have subscribed since my first assignment at St. Mary Parish, Beverly. It is reprinted here with approval; and I hope you find it instructive.

I will see you in two weeks. I will surely be glad when we renew our every-week editions. Two weeks is too long.