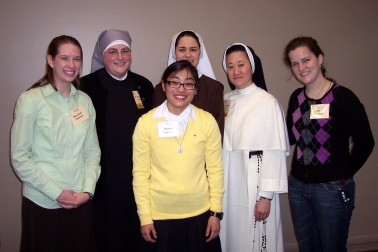 NOTRE DAME — The largest student-run conference at the University of Notre Dame filled McKenna Hall on campus for the Feb. 11-12 event. The Edith Stein Project conference every year focuses on gender, sexuality and human dignity under various themes, with the 2011 theme being “Irreplaceable You: Vocation, Identity and the Pursuit of Happiness.”

Edith Stein was chosen as the patron of the project because, as an early 20th century philosopher, she championed the dignity of women. She converted to Catholicism and entered the Carmelite order, but was killed by the Nazis at Auschwitz in 1942 because of her Jewish heritage. Edith Stein was canonized in 1998 and is known as St. Teresa Benedicta of the Cross.

The vocation theme of the conference was broad, dealing with how the concept of human dignity should guide one’s vocation as a student, one’s state in life — whether it be the priesthood or religious life, marriage or single life — and the work one does.

Two of the headline speakers were authors Wendy Shalit and Dawn Eden. Among Shalit’s books are “A Return to Modesty” (Touchstone, 2000) and “Girls Gone Mild” (Random House, 2007). Eden wrote “The Thrill of the Chaste” (Thomas Nelson, 2006).

Shalit discussed real femininity, in contrast to society’s notion of empowerment and individuality.

Eden told the participants that in society at large, “One’s ultimate value depends not on being made in the image of God, but being wanted and loved by other human beings.” She recounted how this false value caused her to pursue a lifestyle that brought excitement and popularity, but left her feeling empty, depressed and unfulfilled. After she discovered Catholicism, she learned how she could love her neighbor and God appropriately and bring God’s love to see Christ in every person. The real “thrill of the chaste,” she said, is to “listen to the way God calls us at each stage of life.”

The call to religious life or the priesthood was discussed by priests and sisters. Bishop-emeritus John M. D’Arcy shared his vocation story at the Feb. 11 dinner, and on Feb. 12, a panel of three sisters talked about their vocations.

Franciscan Sister Benedicta Duna of the Sisters of St. Francis of Perpetual Adoration in Mishawaka is a 2008 Notre Dame graduate who helped organize the Edith Stein Project when she was an undergraduate. She was a student at the University of Chicago studying in Italy when she witnessed the crowds gathering in St. Peter’s Square to pray as Pope John Paul II lay dying. Witnessing that “outpouring of people” and seeing the “universality of the faith” planted a seed in her, she said, and she transferred to Notre Dame where she could be among people her own age who were serious about the faith.

Sister Benedicta said she was “open to any vocation God would show me,” and one day as she was praying before the Blessed Sacrament, she felt “so called” to religious life.

For Little Sister of the Poor Constance Veit of Baltimore, the thought of a religious vocation came to her as a sophomore in high school when she volunteered at one of the Little Sisters’ homes for the elderly poor, most of whom were infirm and senile.

“From the first moment, I was seized by God, who seemed to be saying ‘This is what I need you for: To give your life to them,’” she said.

Sister Constance said she found this call “life-changing and terrifying,” but as she attended college and continued her work with the Little Sisters, she came to realize that self-absorption didn’t make her happy. The path to joy, she discovered, was in humility and service to the poor, the hallmark of the Little Sisters.

Sister Jane Dominic Laurel of the Dominican Sisters of St. Cecilia in Nashville told the students that in college she had it all: A handsome and virtuous fiancé, nice clothes and the prospect of a lucrative and exciting job.

“Christ gave me everything I could ever want. Then I realized only God could fill my heart,” Sister Jane said. “I have never been happier in my life than belonging to Jesus Christ.”

Lisa Everett, co-director of the diocesan Family Life Office spoke on Natural Family Planning, and John and Monica Sikorski, both Notre Dame graduates, spoke on “The ‘Theology of the Body’ within marriage.” John is a graduate student at Notre Dame and works for the diocese as coordinator for Youth and Young Adult Outreach in South Bend.

The two Notre Dame alumnae who were the original founders of the Edith Stein Project at Notre Dame also spoke about the lay vocation. Caitlin Dwyer, a mother of two, discussed balancing family life with her career aspirations, noting that setting priorities for one’s particular stage of life is essential. Anamaria Scaperlanda-Ruiz, a middle school teacher, talked about the need to adjust one’s plans to the realities of one’s life situation.

Both young women also addressed the culture of heavy drinking and promiscuous sexual activity on college campuses, pointing out that this activity is usually caused by a lack of purpose and direction and is damaging to human dignity.

Current Notre Dame students among the presenters were senior Michael Bohnert, speaking on “The overpopulation myth”; graduate student Michele Chronister, on how God’s grace works in an individual’s vocation; and graduate student Leonard DeLorenzo on “Learning how and what to love.” He also is director of the Notre Dame Vocation Initiative.

Student organizers of the conference were Notre Dame juniors Claire Gillen, Rebecca Roden and Christina Kuklinski. The conference was hosted by the Identity Project of Notre Dame, and funding was provided by several sources, including Our Sunday Visitor and several Notre Dame departments, centers and institutes, as well as generous individuals.