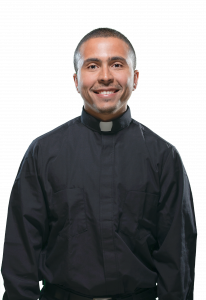 Deacon Arroyo Acevedo earned a B.A. degree in philosophy from Regina Cleri Seminary at the Pontifical Catholic University of Puerto Rico. He earned more degrees while studying at St. Joseph’s Seminary, Yonkers, New York. One degree was a bachelor’s in sacred theology, a degree granted by the Pontifical University of St. Thomas Aquinas in Rome. The other two degrees received were from St. Joseph’s, a Master of Divinity and a Master of Arts in theology. The former is an ecclesiastical degree and the latter an academic one.

Deacon Arroyo Acevedo has three brothers, the younger of whom competed in the 2008 Beijing Olympics as boxers and continue to participate in professional boxing to this day. His mother works as a high school physical education teacher and his father, a U.S. Navy veteran, is a high school math teacher.

Deacon Arroyo Acevedo describes his vocation to the priesthood as “an adventure of love. I was 9 years old and preparing to receive my first holy Communion in New London, Connecticut, when my mother first asked me — apparently jokingly — if I wanted to be a priest, to which I responded, ‘No!’ My father, who was next to her, then asked me, ‘Why? Do you want to get married and have your own family?’ To which I said, ‘Yes!’ Later on, as I had an encounter with the Lord when I was about 15 years old, I took my faith much more seriously and started to get more involved in my parish community, including altar serving, youth groups, youth choir and a missionary group.”

While Deacon Arroyo Acevedo prepared to be confirmed, a group of seminarians left some vocational materials at the parish. “I was fascinated that they were young men, like myself, who were considering the possibility of being priests. I thought they were kind of like Boy Scouts for priests.”

Eventually, Deacon Arroyo Acevedo heard of Blessed Father Solanus Casey, a friar who spent 10 years in Huntington at St. Felix Friary. He said he “felt at home within the Franciscan family. I joined the Franciscans when I was 18 years old. I loved working with the poor and living in foreign missions, but a highlight for me was the opportunity to be the caregiver of the     late Father Benedict Groeschel, CFR, who made his novitiate in Huntington where I eventually lived. He is now buried in Newark, in the same place where I did my novitiate.”

Arriving in the Diocese of Fort Wayne-South Bend three years ago, Deacon Arroyo Acevedo planned to become a friar. However, the Lord seemed to intervene.

“I joined the diocese directly and was sent to Mount St. Mary’s Seminary in Emmitsburg, Maryland, for a year. I was ordained a deacon and sent to St. Joseph Church in Fort Wayne, where I am able to use by bilingual skills, preach and teach both at the school and in the greater parish community.”

This past January, Deacon Arroyo Acevedo participated at World Youth Day in Panama.

“My experience at World Youth Day in Panama was awesome! I had been to only one World Youth Day before: Cologne, Germany, in the summer of 2005. Pope Benedict XVI went to his native Germany, and this time Pope Francis went to his native Latin America. The opportunity to celebrate our Catholic life with so many people from around the world and with our young people, young adults, diocesan staff, clergy, religious and seminarians was a great blessing and encouragement to be a good, holy, healthy and happy priest!

“I want to thank God above all,” he said, as well as “my family for their unwavering support; Msgr. Michael Heintz, for helping me much at the seminary; Father Evaristo Olivera, pastor at St. Joseph, who was my mentor during this pastoral year; and the innumerable number of benefactors and prayerful supporters including the clergy, religious and laity. I am so grateful to all, and I ask everyone to continue to pray for me.”