VATICAN CITY (CNS) — People who visit Catholic shrines must find a place of warmth and welcome, as well as good priests who enjoy being with and listening to the faithful, Pope Francis said.

“It is sad,” he said, whenever visitors arrive and “there is no one there who gives them a word of welcome and receives them like pilgrims who have accomplished a journey, often a long one, to reach the shrine,” and it is even worse if they find the place is closed.

“It cannot happen that more attention is paid to material and financial demands, forgetting that the most important part is the pilgrim. They are the ones who count,” he said.

The pope spoke Nov. 29 to hundreds of priests, religious and laypeople attending the first International Convention of Rectors and Pastoral Worker of Shrines, sponsored by the Pontifical Council for Promoting New Evangelization. The convention, held in Rome Nov. 27-29, focused on the way shrines are “an open door to the new evangelization.”

Pilgrimages and visits to shrines are a key part of popular traditions, and Pope Francis told the group that keeping such popular piety alive was very important.

“It is the immune system of the Church. It protects us from many things,” he said.

Welcoming groups and visitors is very important, he said, so make sure they are made to feel “at home, like a family member who has been expected for a very long time and has finally come.”

Sometimes visitors are people who have distanced themselves from the Church, but they made the trip because they are attracted to the shrine’s artistic treasures or its beautiful natural surroundings, the pope said.

“When they are welcomed, these people will become more willing to open their hearts and let them be shaped by grace. A climate of friendship is the fertile seed our shrines can toss on pilgrim soil, allowing them to rediscover that trust in the Church” that might have been lost because of having been met with indifference, he said.

No one must ever feel like a stranger or an “outsider, above all when they get there with the burden of their own sins.”

If the sacrament of reconciliation is offered at a shrine, the priests should be “well-formed, holy, merciful” and able to help the penitent experience “the true encounter with the Lord, who forgives,” he added. 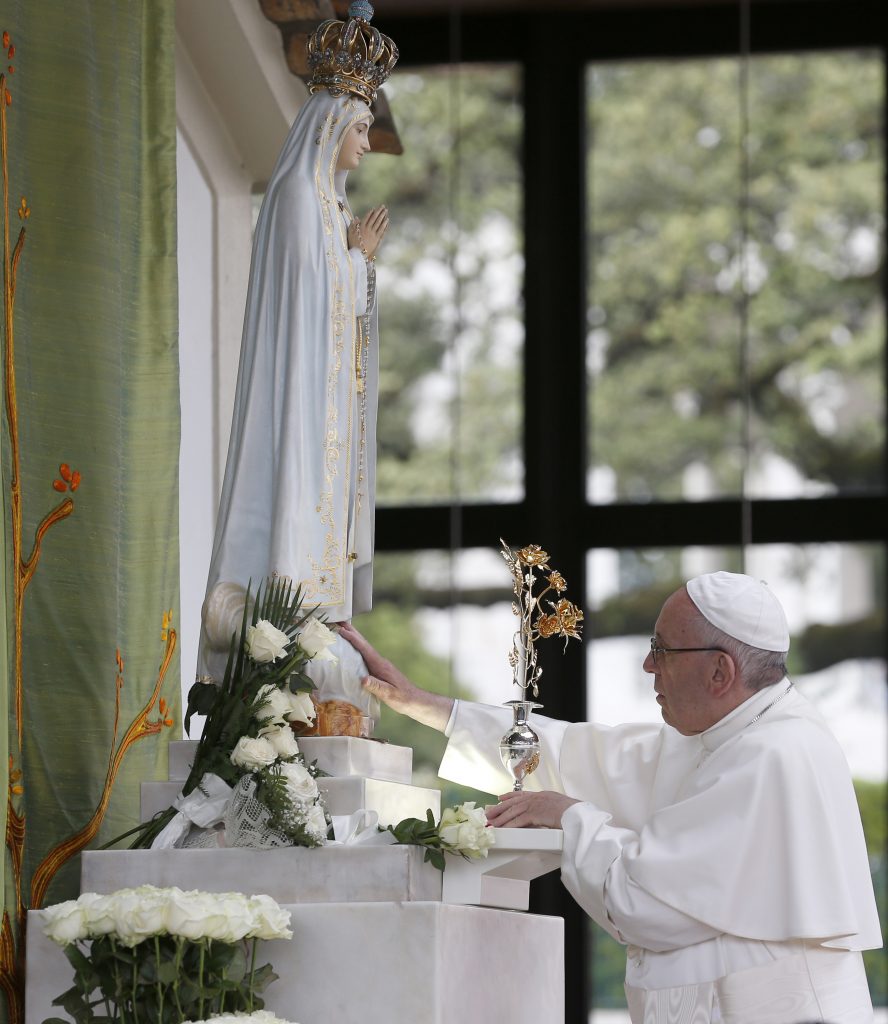 Pope Francis places flowers near a statue of Mary as he prays in the Little Chapel of the Apparitions at the Shrine of Our Lady of Fatima in Portugal May 12, 2017. In Nov. 29 remarks, Pope Francis encouraged rectors and workers at shrines to make guests feel “at home.” (CNS photo/Paul Haring) See POPE-SHRINES Nov. 29, 2018.

Shrines should be places of prayer, but also a place where an individual can pray in silence, he said. He added that priests serving the shrine must be ministers who love being with and understand the people of God. If not, “the bishop should give him another mission, because he is not suitable for this, and he will suffer greatly, and he will make the people suffer.”