For nearly a century, St. Monica Parish in Mishawaka has been a fixture on the north side of the St. Joseph River and served as a proud home for numerous generations of Catholics. Consecrated in 1927 by Archbishop John Francis Noll, St. Monica soon after became the hometown parish for many immigrants from southern Italy.

For one family, the Violis, who arrived over 80 years ago, Mishawaka and St. Monica represented opportunities not only to begin a new life, but also to become rooted in a lasting community of faith, which continues in their families to this day.

Originally from Plati, Italy, a mountainous region in the province of Reggio Calabria prone to flooding, landslides and earthquakes, the Violis sought more stable lands with greater economic opportunity. In 1933, Frank, the eldest of three brothers, departed for the United States and eventually settled in Mishawaka. Having served as a shoemaker’s apprentice in Calabria from the age of 10, he opened a shoe repair shop on East Mishawaka Avenue, which still remains in operation today, although now under new ownership. A lifelong Catholic, Frank also found a new parish home in St. Monica’s, where he would remain an active, lifelong member.

By 1936, he he had saved up enough money to bring his 17-year-old brother Saverio (Sam) to America, where they worked together at Violi Shoes. They closed the store when they went to serve during World War II; Sam’s unit provided supplies for Patton’s 3rd Army in Europe, while Frank was stationed in Texas, where he kept busy repairing soldier’s shoes. After the war the brothers returned home, rejoined their families and resumed their lives. 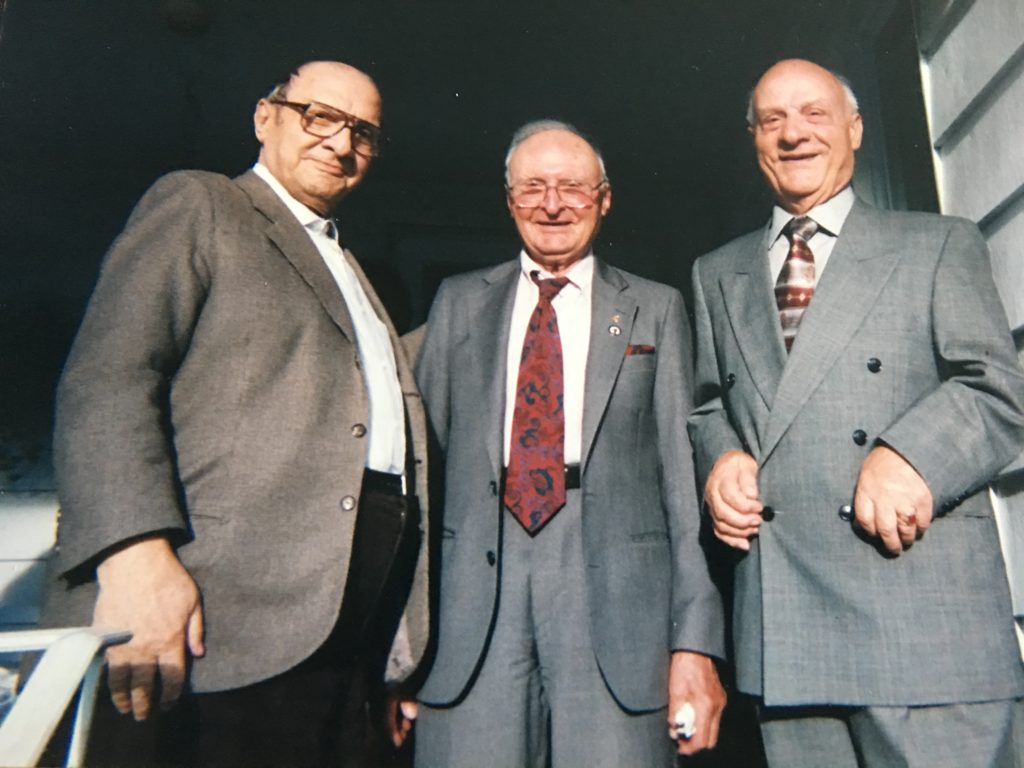 The Violi brothers, lifelong parishioners at St. Monica Parish, Mishawaka, who emigrated from Plati, Italy, stand together in celebration after a family member’s first Communion in 1999. From left to right: Dominic, Frank and Saverio (Sam) Violi.

Frank married had Catherine “Kitty” Arata at St. Monica in 1939 before the war. Her father, Alphonsus Arata, had originally emigrated from Genoa, Italy, and eventually settled in Mishawaka. Frank and Kitty’s daughter MaryAnna Violi shared that her grandfather “found particular delight in the fact people here were able to have their own front yards.”

The entire family became parishioners at St. Monica, which served as the center of faith and community for many on the north side. When the parish installed new stained glass windows, Alphonsus sought to provide a contribution.  He asked everyone in the family to give something, even if it was only a nickel. From this donation, the window depicting the fifth Joyful Mystery, the Finding of Jesus in the Temple, was dedicated in the Arata family’s name.

From an early age, Frank felt very close to St. Christopher, the patron saint of travelers. MaryAnna shared that “my father prayed through the intercession of St. Christopher that he might one day be able to come to America.” After settling in Mishawaka, in thanksgiving for safe passage and the start of a family, Frank and Kitty donated a statue of St. Christopher to St. Monica, which is visible in the rear of the Church. 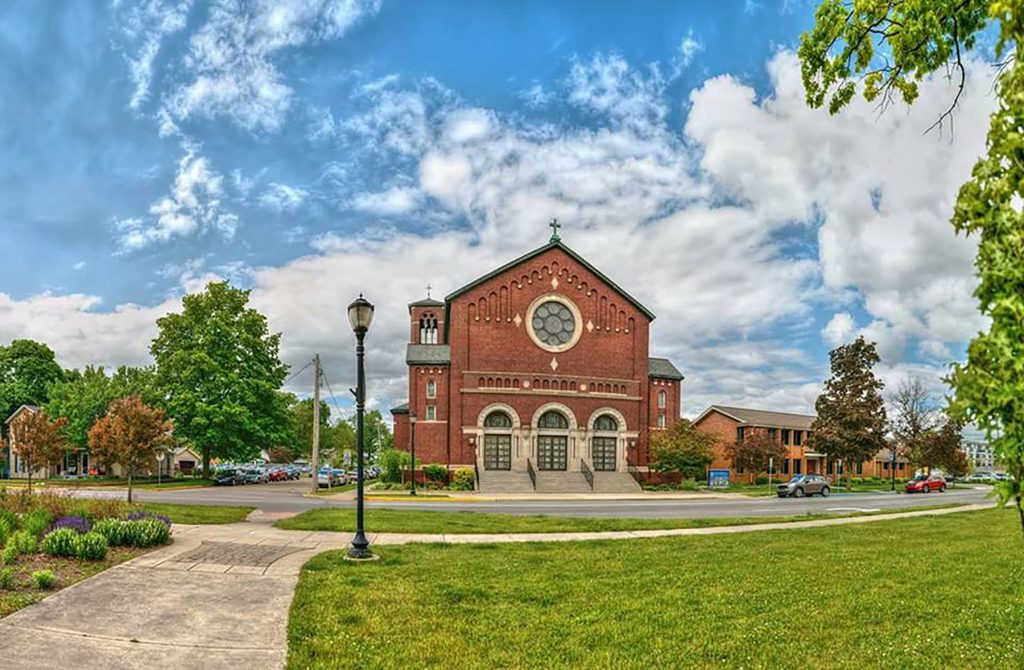 St. Monica Parish, located on the north side of the St. Joseph River in Mishawaka, became in every sense, a home for the Violi family and many other Italian emigrants during the early years of the parish.

MaryAnna Violi also revealed the extent of her parents’ involvement in the life of the parish and community. “My father was on the parish finance committee, served as an usher and was a member of the Knights of Columbus. In addition, he was also on the board of a local bank and the Chamber of Commerce for the City of Mishawaka. My mother was a member and president of the Rosary Society, chaired the ice cream socials, was president of the PTA and served as a playground monitor at St. Monica School. She also headed up the famous St. Monica spaghetti suppers.”

The Violis’ youngest brother Dominic joined them in 1956 at the age of 34, working at Notre Dame for several years as a tailor, serving many of the priests and professors there. In 1960, he ventured back to Plati to marry his sweetheart, Maria. Two years later, Dominic returned to Mishawaka making preparations for the arrival of his wife and their son Tony, who would be born in the United States the following year.

This son, Tony, now serves as athletic director of Mishawaka Catholic, president of the Inter City Catholic League and remains a proud member of St. Monica. With joyful gratitude, he indicated that the parish and school “made me who I am,” and that it was his second-grade teacher, Sister Christine, a Poor Handmaid of Jesus Christ, who first gave him confidence in his abilities as a student. “Talk about a teacher who changed your life! Her patience, guidance, and encouragement, as I was adjusting from speaking only Italian at home to having classes completely in English, gave me hope and totally changed the course of my life.”

Frank, Sam and Dominic also belonged to the DiLoreto Club, a Mishawaka Italian-American social space founded in 1933. Named for Maria SS. DI Loreto, otherwise known as Our Lady of Loreto, the patroness of Plati, the club famously hosted a celebration each August that featured a Marian procession leading to St. Monica. The centerpiece of this Marian tribute was a large statue of the Blessed Virgin holding the Christ Child, which was processed into the church and set in a place of honor during Mass. It was later donated to the parish and blessed by Father Joseph Hennes in 1954. The statue now resides in the side entranceway at St. Monica, where all can see and pay tribute to its beauty. For the Violis, it serves as an additional living memorial of their family’s legacy within the parish.

While Dominic passed away in 1999 at the age of 77 and Frank in 2006 at 96, Sam remains alive today at 100 years old. He and his extended family remain active members of St. Monica and are grateful to see the resurgence in parish attendance and activity within recent years. His daughter, Marianne Govorko, and other family members similarly expressed heartfelt gratitude for the renewal the parish has seen Father Jacob Meyer as pastor regarding finances, involvement, increased participation of young people and more. Thankfully, the Violi family’s legacy and contributions continue to live on and benefit new generations of Catholics in Mishawaka and beyond.