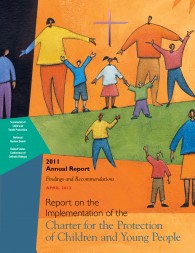 This year marks the 10th anniversary of the adoption of the “Charter for the Protection of Children and Young People” by the United States Conference of Catholic Bishops (USCCB). With April designated as National Child Abuse Prevention Month, the Diocese of Fort Wayne-South Bend, in cooperation with the U.S. Conference of Catholic Bishops, has worked diligently to address the need for the protection and safety of our children and vulnerable adults in the wake of the decades-old clergy abuse scandal that has been brought to light in the Catholic Church.

To that end a special ministry was established to provide a safe venue in which victims of clergy abuse may find their voice.

The Victim’s Assistance Ministry is a collaborative team effort involving Bishop Kevin C. Rhoades, Msgr. Robert Schulte, vicar general of the diocese, and Mary Glowaski, secretariat for Evangelization and Special Ministries and victim’s assistant coordinator. As coordinator of the ministry Glowaski fields not only phone calls and emails, but walk-in victims who seek a safe place to tell their story.

“It’s a complicated ministry in that I am an agent of the Church, but I really become their voice,” says Glowaski.

Many of the victims of abuse, some from 30 to 40 years ago, have been so traumatized that they have fallen victim yet again, this time to addictions, broken marriages and abusive behavior. And those wounds not only affect the victims and their families but the whole Church. Though most served by this ministry live out of state now, Glowaski believes that victim’s assistance can bring hope and healing.

“It is an awful thing. But I believe in those moments when we work with someone personally or by email that’s where healing can happen,” she says, adding, “The ministry is about humility and listening and having them tell us what they need to continue to seek healing after such a traumatic betrayal.”

Glowaski reports that Bishop Rhoades, who has been adamant about the importance of this ministry, is extremely responsive to any request to meet with a victim.

“He is witness of God’s love and so humble,” she says, adding that many times the person brings deep anger or bitterness to the meeting with an expectation that they will be received with the same. However, they are most times astounded to find they are received with great humility and love. And that, says Glowaski, is when the healing begins.

This quiet ministry has taken a proactive approach to offering support for these victims by communicating that the diocese wants to hear from anyone who was abused by clergy or Church leaders by placing victim’s assistance information in parish bulletins and the diocesan newspaper.

The ministry has recently served several who have called with painful stories of abuse in response to the Catholics Come Home Campaign promoting the return to the faith for non-practicing Catholics.

Additionally, Glowaski says that it is not uncommon to receive a call from a family member of a victim who is interested in knowing what will transpire if the victim would call. Many times elderly parents of victims contact the victim assistance coordinator in an attempt to garner some healing for their adult child before they themselves die.

The difficulty lies not in the contact process though, says Glowaski, but rather with the “people in the pews.” “They want it to be over and move on. They don’t understand that we initially had heavy reporting of the abuse scandal and have since moved at glacial speed. Some victims call for months or years without ever giving their names,” she reports.

Contact with each victim varies according to his or her need. Some work intensely for a time and then drift away. Others are in contact nearly every month.

“It’s about relationship,” says Glowaski. “They have to define the terms. It’s not about me, it’s about them and God.”

Many of those the ministry serves have remained faithful to the doctrine of the faith though unable to attend Mass or revisit the parish in which they were abused. Many report they recite the rosary daily, attend Eucharistic Adoration on a regular basis and even watch the TV Mass.

The goal of the Victim’s Assistance Ministry is not necessarily to bring them back to the Church but to help them find ways to restore and deepen their relationship with God. It takes courage to seek assistance and healing from the very institution in which the abuse occurred, notes Glowaski. But “somehow they keep moving toward God,” she says, “And He is so profoundly present in them. They have taught me what it means to be faithful.”

The work of assisting victims of abuse is one of hope, says Glowaski, who “walks with each person who has made the claim, and supports them.”

“We need to stand in hope that healing can and does happen,” she says.

Promise to Protect and Pledge to Heal

A PRAYER FOR HEALING

God of endless love,
ever caring, ever strong, always present, always just. You gave Your only Son to save us by the blood of His cross.

Gentle Jesus, shepherd of peace,
join to Your own suffering the pain of all who have been hurt
in body, mind and spirit
by those who betrayed the trust placed in them.

Hear our cries as we agonize over the harm done to our brothers and sisters. Breathe wisdom into our prayers,
soothe restless hearts with hope, steady shaken spirits with faith:

Show us the way to justice and wholeness, enlightened by truth and enfolded in Your mercy.

Holy Spirit, comforter of hearts, heal Your people’s wounds
and transform our brokenness.
Grant us courage and wisdom, humility and grace, so that we may act with justice
and find peace in You.

We ask this through Christ, our Lord. Amen.