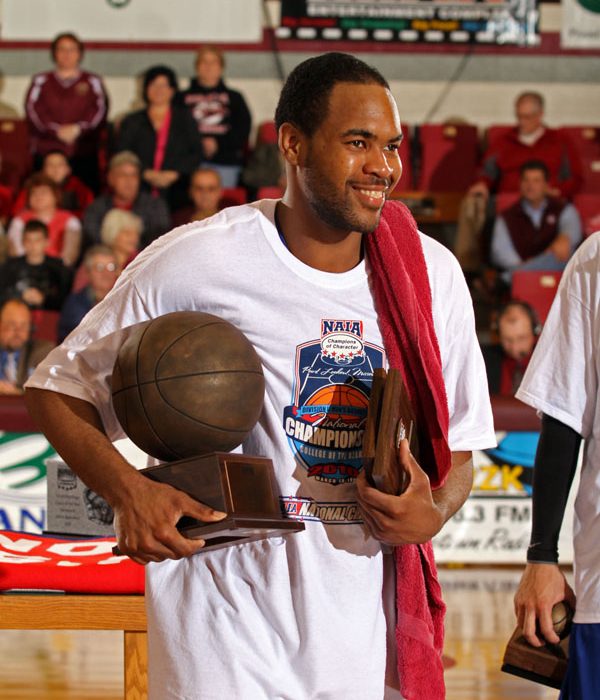 The Cougars’ DeJovaun Sawyer-Davis holds the Most Valuable Player Award after scoring 114 points in five games. The University of Saint Francis Cougars took the NAIA National Championship by holding off top-ranked Walsh University, 67-66 at the College of the Ozarks, Point Lookout, Mo., campus.

FORT WAYNE — Just five days after winning the national championship, life in the University of Saint Francis athletic offices was returning to normal with head coach Jeff Rekeweg searching frantically for a scoreboard controller.
He wasn’t out playing golf, his sporting passion away from the basketball X’s and O’s. He wasn’t plopped in front of the TV to watch the final day of the first round of NCAA Tournament games. It was around 10:30 on a Sunday morning and he needed the controller for a youth basketball tournament scheduled for Hutzell Athletic Center.
“In my wildest imagination, I felt that we could make some noise,” Rekeweg said pausing for a moment before returning to his duties as facilitator for the youth tournament. “Maybe even get to the final four.”

But what about winning the whole NAIA National Championship Tournament? What about becoming the first collegiate team in Fort Wayne to bring home a national championship? As the 15th-seeded/ranked team? Only one team seeded lower had ever won before and the path to the title included the No. 2 ranked and No. 1 ranked teams.
“I felt good about our chances to make some noise,” Rekeweg said with emphasis. “We had played well to beat Goshen in the first game of the Mid-Central College Conference Tournament, 85-78. Even though we lost at Indiana Wesleyan, I felt we played well for much of that game. And we were the healthiest we had been for quite some time.”
And the Cougars did it, holding off top-ranked Walsh University, 67-66, to clinch USF’s first national title on Tuesday, March 16, at Point Lookout, Mo., home of the College of the Ozarks.

“Unbelievable,” is the word that Rekeweg, his assistant coaches Chad LaCross and Gay Martin have used often in the days since the Cougars did it. The Cougars persevered through injuries and aches and pains, soreness and travel to get to short shoot-arounds. They did it defeating teams who had just been in the tournament a year ago and were more experienced than USF, who had taller posts or guards who could fire in 3’s from the 25-30 foot range.

The celebration at Hutzell
What better day to celebrate the University of Saint Francis Cougars’ NAIA Division II National Championship than on St. Patrick’s Day?

The 2010 NAIA Champions returned home on Wednesday night to a loud and rowdy crowd of nearly 1,000 friends, fans, parents, grandparents, USF alumni, USF administrators and support staff, and friends of USF athletics. The Cougar’s bus, which was decorated with the names of the players and coaching staff by members of head coach Jeff Rekeweg’s family, was escorted from I-69 by three Allen County Sheriiff patrol cars and a pumper truck from the fire station on the corner of Spring and Lindenwood.

“I was completely in shock,” USF junior guard Austin Leisure said with a grin. “Unreal.”

After the team received words of praise from USF President Sister M. Elise Kriss and Director of Athletics Mark Pope, it was Rekeweg’s turn at the mic.

“There are so many to thank from Sister Elise and the entire USF administration to my wife and children, to all of the support staff who work our home games, to the Fort Wayne community and the northeastern Indiana region, my assistant coaches and the Houligans (a group of student fans who cheer the Cougars at a fever pitch), we say thanks for your support and we share this with you,” Rekeweg said. “This is unbelievable.”

“This was great, just awesome, a real surprise,” Ferdie Morales-Soto said with a smile.