WASHINGTON (CNS) — The nation has experienced yet another night filled with unspeakable terror,” and “we need to pray and to take care of those who are suffering,” said the president of the U.S. Conference of Catholic Bishops in Washington.

In Las Vegas, a gunman identified by law enforcement officials as Stephen Craig Paddock, 64, was perched in a room on the 32nd floor of a hotel and unleashed a shower of bullets late Oct. 1 on an outdoor country music festival taking place below. The crowd at the event numbered more than 22,000.

He killed at least 59 people and wounded more than 500, making it by all accounts “the deadliest mass shooting in modern U.S. history,” Cardinal Daniel N. DiNardo of Galveston-Houston, USCCB president, said in an Oct. 2 statement.

“My heart and my prayers, and those of my brother bishops and all the members of the church, go out to the victims of this tragedy and to the city of Las Vegas,” he said.

“Our hearts go out to everyone,” Bishop Joseph A. Pepe of Las Vegas said in a statement. “We are praying for those who have been injured, those who have lost their lives, for the medical personnel and first responders who, with bravery and self-sacrifice, have helped so many.

“We are also very heartened by the stories of all who helped each other in this time of crisis. As the Gospel reminds us, we are called to be modern-day good Samaritans,” he added. “We continue to pray for all in Las Vegas and around the world whose lives are shattered by the events of daily violence.”

Bishop Pepe said an early evening interfaith prayer service was to take place at the city’s Cathedral of the Guardian Angels and he invited “our sisters and brothers around the world to join us in prayer for healing and for an end to violence.”

In a telegram to Bishop Pepe, Cardinal Pietro Parolin, Vatican secretary of state, said Pope Francis was “deeply saddened to learn of the shooting in Las Vegas” and “sends the assurance of his spiritual closeness to all those affected by this senseless tragedy.”

“He commends the efforts of the police and emergency service personnel, and offers the promise of his prayers for the injured and for all who have died, entrusting them to the merciful love of Almighty God,” the cardinal said. 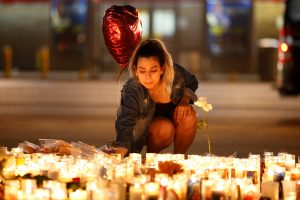 A woman lights candles at a makeshift vigil on the Las Vegas Strip Oct. 2 following a mass shooting at an outdoor country music festival. Late Oct. 1 a gunman perched in a room on the 32nd floor of a casino hotel unleashed a shower of bullets on the festival below, killing at least 59 people and wounding another 527. (CNS photo/Chris Waittie, Reuters) 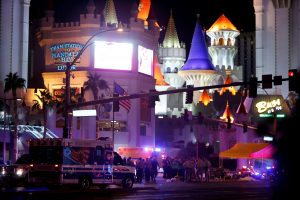 Police and medical workers stage operations in the intersection of Tropicana Avenue and Las Vegas Boulevard South after an Oct. 1 mass shooting at a music festival on the Las Vegas Strip. A gunman perched high on the 32nd floor of a casino hotel unleashed a shower of bullets on an outdoor country music festival below, killing at least 50 people and wounding hundreds, making it the worst mass shooting in modern U.S. history. (CNS photo/Steve Marcus, Las Vegas Sun)

The barrage of shots came from a room on the 32nd floor of the Mandalay Bay hotel-casino complex on the Las Vegas Strip. Once police officers determined where the gunshots were coming from, they stormed the room to find the suspect dead from a self-inflicted gunshot wound, Clark County Sheriff Joseph Lombardo told reporters.

The suspect later identified as Paddock was from Mesquite, Nevada, about 80 miles northeast of Las Vegas, and was described in later reports as a retired accountant. News reports also said law enforcement believed the suspect was a “lone wolf” in planning and carrying out the attack.

In his statement, Cardinal DiNardo said: “At this time, we need to pray and to take care of those who are suffering. In the end, the only response is to do good — for no matter what the darkness, it will never overcome the light. May the Lord of all gentleness surround all those who are suffering from this evil, and for those who have been killed we pray, eternal rest grant unto them, O Lord, and let perpetual light shine upon them.”

Catholic bishops and other Catholic leaders around the country issued statements expressing sadness at the horrific developments in Las Vegas, offering prayers for the victims and praising first responders, volunteers and bystanders for their efforts at the scene.

“Once again we must reach out in shock and horror to comfort the victims of a mass shooting in our country,” said Cardinal Blase J. Cupich of Chicago.

“We reaffirm our commitment to nonviolence and to addressing the causes of such tragedies. At this time we come together in prayer and also in resolve to change a culture that has allowed such events to become commonplace,” he said. “We must not become numb to these mass shootings or to the deadly violence that occurs on our streets month in and month out.”

“We pray that there comes a day when the senseless violence that has plagued the nation for so long ends for good,” said Holy Cross Father John I. Jenkins, president of the University of Notre Dame. The bells of the Basilica of the Sacred Heart on the campus were to ring in the afternoon for all those affected by the Las Vegas tragedy.

The Catholic University of America in Washington offered prayers and support for the shooting victims. It also announced campus counselors and campus ministry staff were available to students needing help dealing with the deadly events, and said the employee assistance program was available to faculty and staff for the same purpose.

“As a community of faith, our university offers its prayers for the victims and their families, the first responders, and the health care workers who are caring for the injured,” said John Garvey, the university’s president. He added, “I ask that we meet this moment by cultivating peace with our words and deeds in our own community.”

The Archdiocese of Detroit held a noon service at St. Aloysius Church to pray for the victims of the shooting, their families and all affected, and also to pray “for an end to such devastating violence in our country and around the world.”

“Violence has once again horrified us as a nation and drawn us together in sorrow. All of us — people of faith as well as those with no particular religious affiliation — are stunned by the tragic, senseless, and incomprehensible loss of life in Las Vegas,” said Atlanta Archbishop Wilton D. Gregory.

“Jesus is weeping with us and for us,” said Pittsburgh Bishop David A. Zubik. “It is time for us as a nation to require at least as much from those purchasing guns as we expect from those making application for a driver’s license. Public safety must always come first.”

He called on lawmakers “to make it far more difficult for those with dangerously impaired moral reasoning, criminals and terrorists to make their point with a gun” and, like Cardinal Cupich, urged better access to mental health care “for those who may be prone to violence.”

“Join with me in prayer that we as a nation will seek to build a society in which the right to life is the standard against which all other rights are measured,” he said.

“I pray for the end of the violence and hatred in our nation, and I continue to pray that we follow the truth given to us in Psalms, that we should always trust in Jesus,” said Bishop Richard F. Stika of Knoxville, Tennessee.

Bishop Edward C. Malesic of Greensburg, Pennsylvania, noted the “tragic irony” that the mass shooting had taken place on Respect Life Sunday and the beginning of the Catholic Church’s observance of Respect Life Month.

“We can never become numbed to the seemingly endless stream of outrageous crimes that show a lack of respect for our fellow human beings,” the bishop said. “We continue to teach and proclaim that every human person is created in God’s image and has the right to life. … We will continue to pray that the light of God’s love will reach into the darkest places in our nation and our world.”