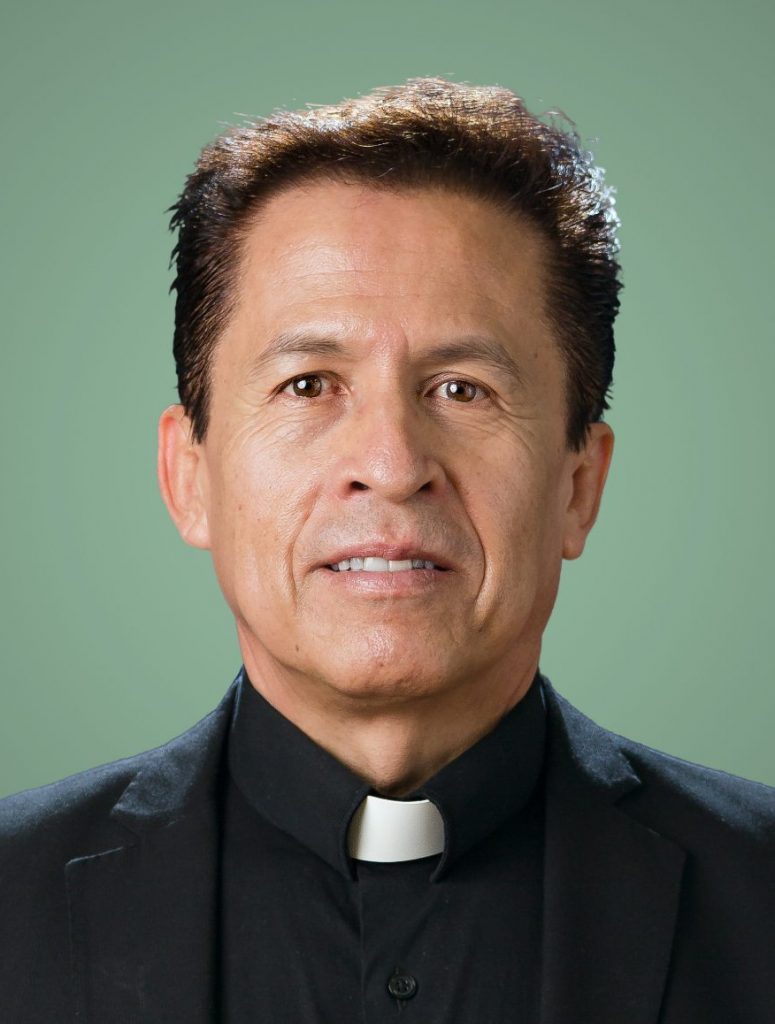 The enthusiasm and positive attitude of a young seminarian first drew Father Constantino Rocha to the idea of becoming a priest, and those qualities have permeated the 25 years of his vocation to date. They also figure prominently in what he hopes the future will bring to his ministry.

Father Rocha was born in the very small town of General Escobedo in Durango state, Mexico, into a Catholic family of 11. When he was just 4 years old, he remembered, he and some of his siblings attended a series of Holy Week religious education classes given by a seminarian. The obvious love the seminarian had for his faith caught the child’s attention.

“It was at that moment, even though I didn’t understand even what a seminarian was – I saw him as a priest – that I wanted to be like that young man when I grew up. I said I wanted to be a priest.”

Father Rocha kept this calling from his parents until he had completed the sixth grade. “Even at that age, I was quietly preparing myself by attending catechesis (religious education classes) and Mass,” he said. He also served at Mass as an acolyte, even while his end goal remained distractingly present. “I didn’t like being an acolyte, because at the time I was determined to be a priest, not an acolyte.”

He entered seminary in the 10th grade, in the city of Durango, and studied for four years. Becoming interested in the religious life, he joined the Holy Trinity order and received from them religious formation. He also studied three years of theology as well as philosophy.

Father Rocha left the religious community in 1994. His fourth year of theology was finished at the diocesan seminary in Nezahualcóyotl outside of Mexico City. On March 17, 1995, he became a diocesan deacon.

Three months later, on June 29, his youthful calling was realized: Constantino Rocha was ordained to the priesthood.

Father Rocha was asked by his bishop to serve as spiritual director for diocesan seminarians for three years, followed by short pastoral appointments to two parishes. Then, an exciting development occurred.

Having asked for an opportunity to serve in the United States, in the year 2000 Father Rocha’s request coincided with just such an invitation extended by Bishop John M. D’Arcy of the Diocese of Fort Wayne-South Bend. Bishop D’Arcy was in need of Spanish-speaking priests who would minister to Mexican immigrants in several parishes of the diocese for a two-year period. Father Rocha arrived at St. John the Evangelist Parish, Goshen, in December to serve as parochial vicar.

That initial two-year period now long past, he recalled some initial adjustment.

“I had no idea of the extent of the need within the Hispanic community here for pastoral leadership. But it was a blessing, and it helped reinforce my vocation to not dwell on what I was leaving behind. Instead, I directed all of my attention to evangelization and organization of the parish’s Hispanic ministry, where I would stay for 10 years.”

In 2010, Father Rocha was asked to minister at Our Lady of Guadalupe Parish and shrine, a community of Spanish-speaking Catholic faithful in northern Kosciusko County. The first thing the new pastor noticed was that although Warsaw isn’t far from Goshen, the two parishes were very different. The faithful of St. John were newer immigrants lacking in religious education and the sacraments, while those of the Warsaw community had been there longer and were more formed in the faith.

At Our Lady of Guadalupe, one of the pastor’s challenges has been the fiscal situation.

“The parish still had a debt from the church’s construction, but thanks to God and the generosity of parishioners, we were able to pay it off. Together we’ve been able to adorn the sanctuary with stained-glass windows that complement the mysteries of the rosary, and other improvements have come about little by little. The generosity and hard work that parishioners have been willing to put into their parish has been amazing for me to see.”

In order to becoming a fully functioning parish community, it is hoped that religious education classrooms can be constructed someday as well.

Remaining faithful to the Lord and the call made to him, Father Rocha plans to continue striving to unite himself to Jesus, the eternal high priest. “As a person, I intend to try every day to be a better, understanding human being, in service to all and to my Church.”