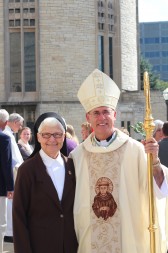 FORT WAYNE — The University of Saint Francis celebrated its 125th anniversary as an institution of higher learning with a Mass for the solemnity of St. Francis of Assisi Oct. 4 at the Cathedral of the Immaculate Conception in downtown Fort Wayne.

Bishop Rhoades began his homily by saying, “Jesus offered praise to His Father, the Lord of heaven and earth, because although He had hidden these things (His identity and His plan) from the wise and the learned, He has revealed them to the childlike.”

He explained that though these words may be challenging for a community of academic scholars, for a university where learning is naturally esteemed, these words of Jesus are important for the faithful to ponder. Things hidden from the wise and learned, God has revealed to the childlike. So one should never get puffed up or boastful about his intellectual accomplishments or awards, he said. It was the wise and the learned, like the scribes and Pharisees, who were blind to the truth about Jesus and rejected Him. It was the childlike, the meek and the poor in spirit, the “little ones,” the childlike, who accepted Jesus and followed Him … God revealed to them what the wise and learned did not grasp.

Bishop Rhoades continued, “As we celebrate the 125th anniversary of the University of Saint Francis, it is good to reflect on this prayer of Jesus. Your namesake, your patron, whose feast we celebrate today, the poor man of Assisi was one of the childlike, the little ones, to whom God revealed His mystery.”

“All who follow Jesus, like St. Francis did, with humility and meekness, find peace, real peace, true rest, the peace and rest that are born of love, born of that greatest love, the love of the cross. In the cross, Francis saw love and he experienced love. His journey to Christ began at San Damiano with the gaze of the crucified Jesus, a deep experience in prayer of God’s grace and love. St. Francis became a new creation. This is what happens to us, Pope Francis says, when we let the crucified Jesus gaze upon us.”

“Francis is a model for us of taking up the cross of Jesus every day. … The cross is love and the truth that sets us free. We should boast in nothing else. The humble St. Francis teaches us this great lesson.” 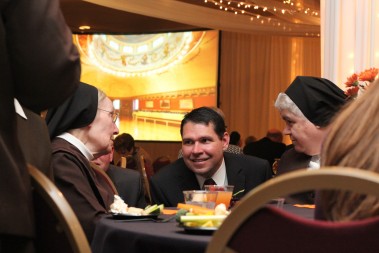 Sister Monica Bertha, left, Jason Lipscomb, director of Alumni and Career, and Sister Angela Mellady, provincial of the Sisters of St. Francis of Perpetual Adoration, right, chat at the reception.

Bishop Rhoades spoke directly to his audience by saying, “As a university your pursuit of excellence, learning and scholarship is obviously very important. But that pursuit does not completely define your mission. You are a university under the patronage of the humble and poor St. Francis of Assisi, who reminds of us of the words of Jesus, that God has revealed His mysteries not to the wise and learned, but to the little ones, the childlike.”

Bishop reminded his listeners, “From its small and humble beginnings in Lafayette 125 years ago until today, this university has been Catholic, inspired by a vision that goes beyond worldly success. It’s a vision rooted in the Gospel, the Gospel that was St. Francis’ daily bread. It’s a mission that embraces learning in all its facets, yet most deeply and fundamentally, learning at the school of our Teacher and Master, the One who said, ‘Take My yoke upon you and learn from Me, for I am meek and humble of heart.’”

Bishop Rhoades asked for God’s blessing on the Sisters of St. Francis of Perpetual Adoration, the university’s founding order of nuns who were in attendance in large numbers. Though the university has grown and changed, he said, its “Catholic identity and Franciscan inspiration has remained.”

Following Mass, a reception was held in the USF Robert Goldstine Performing Arts Center on the university’s downtown campus, where attendees gathered to share memories of the school.

Board of trustees member Dr. Michael Mastroangelo called the anniversary “quite an achievement,” and cited the “wonderful way the board and sisters work together” for the good of the institution.

President Sister Elise Kriss, a Sister of St. Francis of Perpetual Adoration, addressed the crowd, recognizing dignitaries and thanking them for helping to make the occasion memorable. An historical video recounted the early days of the university, its growth and advancement over the past century and its more recent accomplishments.

Looking to the future, Sister Kriss spoke of plans for the downtown campus, which will house the Keith Busse School of Business and the School of Music Technology and be home to 300 students, staff and faculty within a very short time.

She reiterated the university’s mission statement: Rooted in the Catholic and Franciscan traditions of faith and reason, the University of Saint Francis engages a diverse community in learning, leadership and service. Its students learn to respect the unique dignity of each person, encourage a trustful, prayerful community of learners, serve each other, society and the Church and respect creation, she said.

The University of Saint Francis was founded in 1890 in Lafayette by the Sisters of St. Francis of Perpetual Adoration as a small training school for sisters who wished to become teachers. Today it has an enrollment of 2,300 male and female students in a wide array of undergraduate and graduate degree programs.

There appears to be no limitations on what the future may hold for the growing, vibrant, faith-filled institution of higher learning that is the University of Saint Francis.