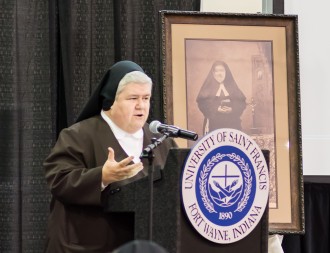 Sister Angela Mellady, provincial superior, speaks at the 150th anniversary celebration of the Sisters of St. Francis of Perpetual Adoration at the Fort Wayne regional event on Oct. 13. In the background is an image of Mother Maria Theresia Bonzel, foundress of the order, who will be beatified in November.

FORT WAYNE — The Sisters of St. Francis of Perpetual Adoration continued the celebration of their 150th jubilee year on Sunday, Oct. 13, with a Mass and reception at the University of Saint Francis in Fort Wayne. The festivities had begun earlier with a similar event at their motherhouse, the St. Francis Convent in Mishawaka. This time, scores of family and friends, University of Saint Francis board members, administrators, faculty and students joined the 65 sisters who were in attendance for the joyous occasion.

Celebrant for the 150th Jubilee Mass was Bishop Kevin C. Rhoades. Concelebrant was Father David Meinzen, chaplain of the university.

A regional celebration also was celebrated at the St. Francis Chapel in Mishawaka on Sept. 29.

He continued pointing out that the theme of thanksgiving was prominent in the day’s readings. In the first reading Naaman the Syrian, a foreigner and enemy of God’s people, was cured of leprosy, which brought him to a profession of faith. But when Naaman tried to give Elisha, the prophet, a gift in thanksgiving, Elisha refused it because he knew that it was God who had cured Naaman of his disease.

Likewise, in the Gospel, Jesus cured 10 lepers but only one of the group, the Samaritan, returned to thank him. Like Naaman in the earlier reading, he was considered a foreigner, of another religion. But he too received the gift of faith and thanked Jesus for his cure.

“The message for us today is very clear,” said Bishop Rhoades. “Do we practice the wonderful virtue of gratitude in our lives or are we at times remiss or even ungrateful?”

Stewardship is recognizing that all we have and are is God’s gift to us and then giving back to God of our time, our talents, and our treasure to Him and His Church, he said.

Bishop Rhoades spoke at length about Mother Maria Theresia Bonzel, foundress of the order of St. Francis of Perpetual Adoration. A woman of great faith who had encountered God’s love in her life, she answered His call to follow Christ. Filled with gratitude for God’s love, she ministered to the sick and the poor, while realizing that her calling was a gift from God. And that deep experience of God’s love inspired her to respond in gratitude by leading a new religious congregation.

Mother Theresia wrote, “The love, the extraordinary love God has shown me, demands that I love and honor God perfectly, and live with a view to the goal and end of my life. God has proved His love for me in the great grace of the vocation to the religious life. …”

Bishop Rhoades continued, “That allowed her to serve the Lord with such selfless dedication, even in the midst of huge challenges and much suffering. She was able to persevere because she turned to God in all situations, in joys and sorrows.”

The Holy Eucharist was the center of her religious life. And this is the inheritance received by the thousands of sisters who, for the past 150 years, have embraced the contemplative and active life of Mother Maria Theresia Bonzel as Sisters of Perpetual Adoration, he said.

The Sisters of St. Francis came to the Diocese of Fort Wayne, which at that time included the entire northern half of the state of Indiana, by invitation of Bishop Joseph Dwenger in 1875. They traveled from the motherhouse of the congregation in Olpe, Germany, to open a hospital in Lafayette. The community grew rapidly and in 1885, became a separate American province. Through the years, the sisters have had an important presence in the teaching apostolate and in health care.

According to Bishop Rhoades, the sisters’ first apostolic works were in areas that are now part of the dioceses of Lafayette and Gary. But in what is now the Diocese of Fort Wayne-South Bend, their first apostolate was at St. Patrick School in Lagro in 1889, then at St. Andrew School in Fort Wayne in 1911, St. John School in Goshen in 1917, and St. Mary’s School in Huntington in 1921. By 1924, more than 100 Sisters of St. Francis were teaching in the diocese.

In 1944, when the community decided to relocate Saint Francis College from Lafayette to Fort Wayne, the order took on even more prominence. At first, the college only trained sisters to be teachers, then before locating to Fort Wayne it began accepting lay women as students. Eventually it became coeducational, while enrollment grew and academic programs expanded. In 1998 it became the University of Saint Francis. “It is very appropriate that this regional celebration today is here on the campus of this university, a blessing to the city of Fort Wayne and to our diocese for the past 69 years,” said Bishop Rhoades.

He pointed out that, in years past, the Sisters of St. Francis have taught at St. Therese School and Bishop Luers High School in Fort Wayne.

Sister Angela Mellady, provincial superior, who was in attendance at the celebration, told Today’s Catholic, “Even though we no longer have a physical presence in Huntington, or at St. Therese or Bishop Luers, the sisters talk about them as though it was yesterday. The relationships formed are a cherished part of our history.”

Bishop Rhoades commented on the bright future of the religious congregation, “It is a special joy for me that the sisters are receiving vocations among the young women of our diocese.”

Sister Angela shared that the young women who are in discernment about a vocation also express the desire to wear a religious habit and to live in community. Personal contact with the sisters is also important. “The candidates will say that it was the joy of the sisters they met that inspired them to consider religious life,” she added.

Of special joy to the sisters is the upcoming beatification of their foundress, Mother Maria Theresia Bonzel, which 48 of them will attend next month in Germany. Sister Angela said, “The sisters have prayed for this daily from before I entered. There is a great deal of excitement …” in anticipation of the event.

She summed up their goal, “We pray to be able to live out faithfully our mission of combining the contemplative life with the active in Perpetual Adoration and the works of mercy after the example of St. Francis and Mother Maria Theresia. … After 150 years, we continue to say with her: ‘He leads, I follow.’ What a special grace to have our beloved foundress … beatified during this jubilee year.”

In closing, Bishop Rhoades said, “I began this homily reflecting on the theme of thanksgiving. Of course, we thank the Sisters of Saint Francis of Perpetual Adoration on this 150th anniversary. But I know Mother Maria Theresia would want us to offer our thanks first to God, the source of all blessings.”

“May Jesus in the Blessed Sacrament continue to pour out His love and grace upon the Sisters of St. Francis and upon our diocese,” he prayed.