On November 26, 1842, Father Edward Sorin and his brother companions of the Congregation of Holy Cross arrived at the snowy property in South Bend, Indiana.  The next day, they celebrated Mass on the hallowed ground. Nearly 175 years later, the university celebrated in the same way with Bishop Kevin C. Rhoades in the beautiful Basilica of the Sacred Heart. 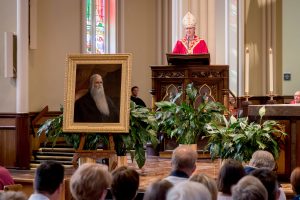 The votive Mass on Friday, Aug. 25, was a special one of the Mystery of the Holy Cross. The readings and liturgical music were most appropriate to the occasion, such as “Lift High the Cross.” It also marked the end of the ND Trail, a 13-day pilgrimage which retraced Father Sorin’s “inspirational journey and intrepid spirit” from Vincennes to Notre Dame. Hundreds of alumni, friends and members of the Notre Dame family joined together for the pilgrimage. Read Bishop Rhoades homily here.

There was a palpable feeling of excitement and jubilee in the Basilica that reflected well the zeal and gratitude of the faithful. Numerous priests of the Congregation of Holy Cross concelebrated with Bishop Rhoades, marking the anniversary. The setting sun of the early evening poured through the original, colorful French stained-glass windows illuminating the faithful in the nave as they prepared to receive the Holy Sacrament. 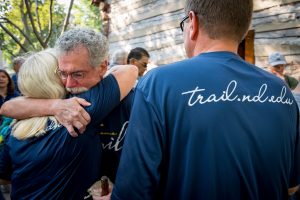 Dan Allen, Double Domer alum ’07, ’11 M.Div. and spirituality program director of the ND Alumni Association reflected, “It felt fitting to have Bishop Rhoades celebrate Mass with the pilgrims on Friday evening as he blessed us before our final day on the trail. I was particularly touched by his remarks about the missionary priests, Stephen Badin, Louis De Seille and Benjamin Petit, whose holy lives and actions served as fertile ground for Father Sorin to establish Notre Dame. It reminded me that we all stand on the shoulders of holy people, some known and some unknown, who have come before us. During the trail, my fellow pilgrims and I certainly felt a sense that we were following in the footsteps of such giants, desiring to take our place as beacons of hope for those who will follow.”

“Two lines from the Holy Cross Constitutions played repeatedly in my mind and heart.,” Allen shared. “The first was, “A great band of men had passed this way, men who had made and lived by their vows, men who had walked side by side in their following of the Lord.” The second was, “The footsteps of those men who called us to walk in their company left deep prints, as of men carrying heavy burdens. But they did not trudge; they strode. For they had the hope.” I have always appreciated those sentiments as an alumnus and friend of Holy Cross, but the opportunity to walk the trail gave me an unprecedented opportunity to cement forever the relationship between my faith, my fellow sojourners and my university.”

The hallowed ground of the University of Notre Dame’s campus was a focus of Bishop Rhoades’ homily as he reminded the faithful of the sacrifices and prayers of the missionaries and spiritual predecessors. He highlighted Father Stephen Badin, the first ordained priest in America who originally purchased the land on which the university now stands and built the first building there, the log chapel. He also spoke of Father Louis DeSeille, a Belgian priest and Father Benjamin-Marie Petit who served the local Native American tribe of the Potawatomi Christians. The latter, Bishop Rhoades explained, was “a martyr of love for the oppressed people he loved and served. He carried the cross with them. He was a shepherd who did not abandon his flock. Father Petit, like Father DeSeille and Father Badin, is buried beneath the log chapel. His body was brought back to Notre Dame by Father Sorin in 1857. In my opinion, the log chapel is the holiest spot on the Notre Dame campus, a special place to pray.”

Susan Johns, mother of Celia Johns, ’11, traveled from Louisville, Kentucky, to join the Notre Dame Trail for five days of the pilgrimage. She found “the physical aspect of the trail” compelling. “It was like a retreat on your feet. We prayed the rosary every day — sang, talked and met new friends. It was also more rigorous than I imagined,” she said laughing. A few blisters later, Johns felt renewed in “mind, body and soul. It is always beautiful to pray here at the Basilica.” Just as Father Sorin found it, 175 years before.