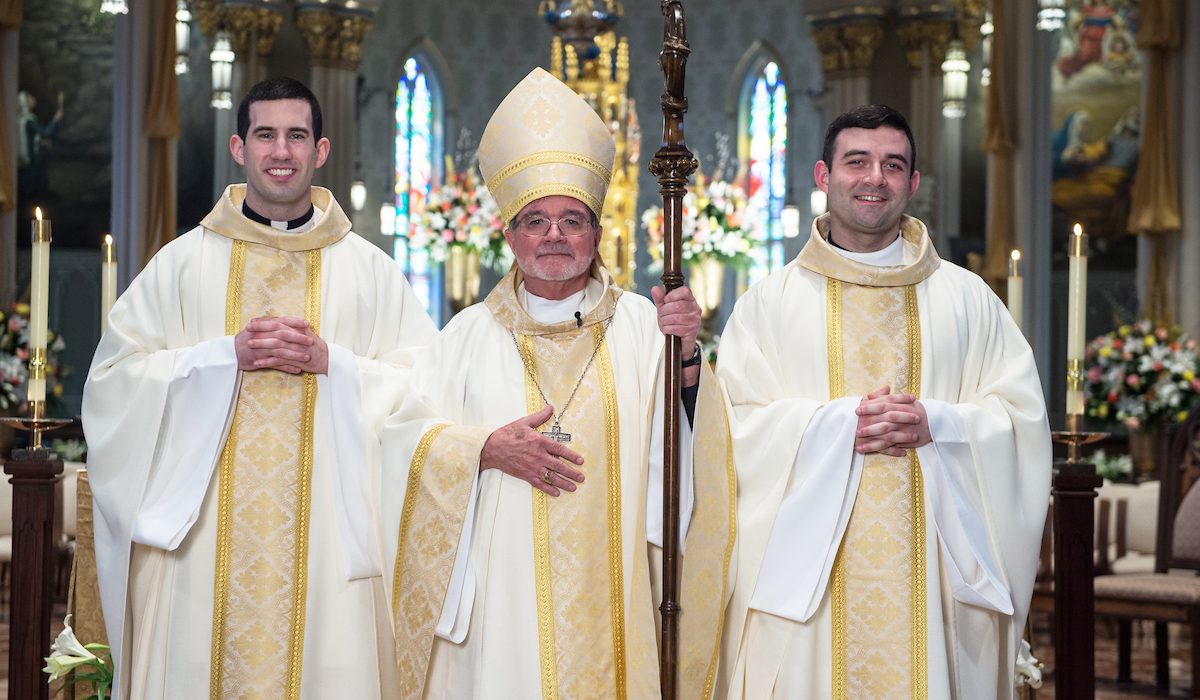 NOTRE DAME — With abundant joy and thanksgiving, the United States Province of the Congregation of Holy Cross celebrated the ordination of two new priests on Saturday, April 22, at 2 p.m. at the Basilica of the Sacred Heart, located on the campus of the University of Notre Dame. The Most Reverend Arthur J. Colgan, CSC, Auxiliary Bishop of Chosica, Peru, conferred the sacrament of holy orders on Father Michael Patrick Palmer, CSC, and Father Ryan Joseph Pietrocarlo, CSC. The ordination Mass was streamed live on the Internet at Ordination-live.holycrossvocations.org.

On Aug. 27 deacons Palmer and Pietrocarlo professed perpetual vows of poverty, chastity and obedience and committed themselves to the common life and apostolic work of the Congregation of Holy Cross.

In acknowledgement and celebration of their ordination, Father Thomas J. O’Hara, CSC, Provincial Superior of the United States Province of Priests and Brothers of the Congregation of Holy Cross, reminded deacons Palmer and Pietrocarlo of Constitution 5:52, which is most suitable for their unique paths within the congregation: “We live our consecration in many lands and cultures. Our commitment is the same wherever we are, but we seek to express it in a manner rooted in and enriched by the varying contexts and cultures in which we live. In this way, we hope to make our witness and service more effective for the kingdom.” (Constitutions of the Congregation of Holy Cross, 5:52) “The seed of service and witness you’ve planted during your time in formation is now further nourished by your ordination as priests. Let now the effect take root and continue to blossom as you carry out your ministries,” added Father O’Hara.

Father Michael Patrick Palmer is the fourth of seven sons of Warren and Victoria Palmer of Berkley, Mich. He entered formation with the congregation in 2007 and professed first vows on July 28, 2012.
Prior to his ordination as a transitional deacon, Palmer served as a religious education teacher at St. Adalbert Parish, South Bend, 2010-11; as hospital chaplain and Catholic Charities volunteer in Colorado Springs, Colo., from 2011-12; and as a novice in residence at St. Ignatius Martyr Parish in Austin, Texas, in 2012. From 2012 to 2013 he served as a volunteer at the Logan Center in South Bend, then as a RCIA team member at Christ the King Church, South Bend, 2013-14. During his pastoral year he served as assistant hall director and campus ministry team member at the University of Portland, 2014-15. In 2015 Deacon Palmer entered chaplain training at the U.S. Army Chaplain School in Fort Jackson, S.C., then served in marriage preparation at Christ the King Church, South Bend, 2015-16. He earned a bachelor’s degree in philosophy at the University of Notre Dame in 2011 and his M.Div. from the same in 2016. 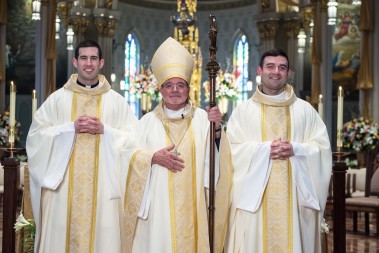 As he prepared for ordination day, Deacon Palmer reflected on the charism of Holy Cross and how his understanding of it has changed since he entered the congregation.

“In our constitutions, we speak of ‘crossing borders of every sort’ and embracing the hope of the cross wherever it is found. When I first entered Holy Cross, I had no idea just how far-reaching it was. I didn’t even know Bangladesh was a real country! I was content to think of the congregation as confined to the South Bend area.

“But, once I had been in formation for a few years and began to meet brothers and priests from Mexico, Chile, France, East Africa — and, yes, Bangladesh — I was awed at the great mission that Holy Cross had embraced to serve God’s people.

“Simply put, every human being who has ever drawn breath has also known the cross. Suffering, oppression, and despair doesn’t care about language or borders or race; thankfully for us, neither does the hope of Christ.

“This charism became real for me when I joined the Army Chaplain Corps nearly three years ago – following a Holy Cross tradition that began in the Civil War.

“Our call to follow the cross across all borders certainly rings true in the military, where men and women often have no one to turn to in the midst of suffering. The shadow of the cross looms large. If God wills it, I hope to go into active duty and bring the sacraments to our brothers and sisters, no matter where they are.”

Deacon Palmer served his diaconate year at Christ the King Church, South Bend, and his first Mass as a priest was celebrated on April 23 at the parish. He will also celebrate Mass at his home parish, National Shrine of the Little Flower Basilica in Royal Oak, Mich., at 10:45 a.m. on May 21, followed by a reception.

Father Ryan Joseph Pietrocarlo, CSC, is the older of two children of Joe and Karen Pietrocarlo of East Rochester, N.Y. While serving his diaconate at St. Adalbert/St. Casimir parishes in South Bend, he looked forward to his ministry with great anticipation.

“What attracted me to Holy Cross in the beginning still attracts me today — and that is the diversity of ways to serve the church. I am excited to see how the Holy Spirit will guide me throughout my life to serve His people. I love entering people’s lives and walking with them on their journeys of faith. To help people come to Jesus Christ and the fullness of life that He gives us. I know my greatest challenge will be facing those resistant to that call or those who have experienced great difficulty, making them question that truth. It is then that the message of the cross as our only hope can prove most powerful.

But I am humbled by God, who has called me. I look forward to serving His people and His church as a priest, and being able to celebrate the sacraments, especially the Eucharist and the sacrament of reconciliation. The priority of my life will be to administer the sacraments and share in the great conviction that the fullness of our faith and our lives can be found in them.”

Prior to his diaconate year, Pietrocarlo served as a volunteer at Holy Cross House, Notre Dame, 2007-08; as a chemistry tutor for First Year of Studies, Notre Dame, 2008-09; as catechist at Christ the King Parish, South Bend, 2010- 11; as a volunteer at André House, Phoenix, 2011; as chaplain at Penrose Hospital, Colorado Springs, Colo., 2011-12; then in music ministry and as catechist at Our Lady of the Woods Parish in Woodland Park, Colo., 2012-13. Deacon Pietrocarlo volunteered at Stone Soup Community in South Bend, then served in marriage preparation at Christ the King Parish, 2013-14. He served his pastoral year at Nuestra Madre Santíssima de La Luz Parish, Guadalupe, Nuevo Leon, México 2014-15, then served in adult faith formation at St. Adalbert/St. Casimir Parishes, South Bend, 2015-16.

He earned a bachelor’s degree in biochemistry from the University of Notre Dame in 2011 and received his M.Div. from the same in 2016. He entered formation with Holy Cross as an Old Collegian in 2007. He made his first profession of vows on July 28, 2012.

Father Pietrocarlo celebrated his first Mass as a priest on April 23 at St. Adalbert Church, South Bend, followed by a reception at St. Adalbert Catholic School. He also celebrated Mass at Morissey Hall Chapel on the campus of the University of Notre Dame at 10 p.m. the same day.