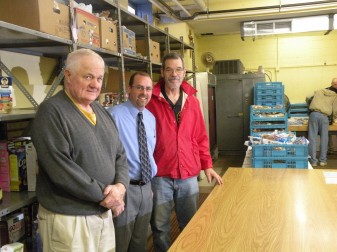 Jim Christie, executive director of The Franciscan Center, center, poses with food pantry volunteers John Matera, left, and Dave Sensenich, right, on Nov. 5. The food pantry operates Tuesdays and Thursdays from 9-11 a.m. in the basement of the Sacred Heart School in Fort Wayne at 4643 Gaywood Dr.

FORT WAYNE — Who does “Thanksgiving Tuesday,” Father Benedict Groeschel, community giving and serving the poor have in common? They are all connected with The Franciscan Center in Fort Wayne with the spirit of St. Francis all packaged in the line: “I come to bring love and peace for all people.”

The Franciscan Center is involved in a campaign to provide a turkey or ham on Thanksgiving for its clientele which has grown considerably during the economic downturn and unemployment. The Franciscan Center, located in the former Sacred Heart School in Fort Wayne, operates a food pantry on Tuesdays and Thursdays, a Sack Lunch Ministry that feeds 1,000 on Saturdays, and the Medicine Cabinet that offers medicines and hygiene products on Tuesdays from 10-11 a.m.

Executive Director Jim Christie has a goal to distribute 1,500 turkeys or hams on Tuesday, Nov. 24. Through the generosity of Tim Didier Meats, 200 turkeys were donated to The Franciscan Center through the recent fall Redeemer Radio — Catholic Radio 1450 AM — Sharathon. An additional 900 turkeys and hams were purchased, “and now we need to pay for them,” Christie told Today’s Catholic.

Christie hopes to raise funds to cover these purchases, but the public is also invited to purchase a turkey or ham on their own and deliver it to the center on Nov. 19, 20 or 23rd. The turkeys will be distributed Nov. 24 to those clients who have obtained vouchers, which have been distributed during operational hours of the food pantry.

The Franciscan Center is celebrating its 20th anniversary this year, and on Oct. 24, a successful dinner and auction fundraiser was held at the Marriott Ballroom in Fort Wayne with over 300 in attendance.

The 20th anniversary celebration continues on Saturday, Dec. 12, at the University of Saint Francis’ North Campus auditorium with speaker Father Benedict Joseph Groeschel, host of the popular Eternal Word Television Network’s “Sunday Night Live With Father Benedict Groeschel.” Father Groeschel, who lived at St. Felix Monastery in Huntington for some time, is one of seven Capuchin colleagues who founded the Franciscan Friars of the Renewal with the mission of preaching reform and serving the poor. Father Groeschel is a retreat master, author, psychologist and activist. A reception begins at the North Auditorium, located at 2702 Spring St. at 2 p.m.; his talk begins at 3 p.m.; and Bishop John M. D’Arcy will concelebrate a Mass at 4 p.m. A freewill donation is requested and Father Groeschel’s books and videos will be for sale.

Larry Wright, who Ley calls her scout, helped school the ladies in ministering to the homeless, offering “street smarts,” and how not to make themselves vulnerable. “Look all around” and “don’t leave your purse sitting out,” Wright and the other men at the homeless shelter would instruct.
“God was always there and took care of us. We just didn’t think of it,” Ley said of the possible dangers. “It reminds me of the Scripture passage as Jesus was walking through Capernaum, and they said, ‘who is he who walks with such authority?’ That’s the Christ in us. He gave us the authority to go down there and straighten these guys out.”

“I really felt God was with me … and the angels and St. Francis,” Torgersen added.

“I always said I would rather live a long, long life brave, than a short life fearful,” Ley said. “I can’t stand fear.”

Along with Jean Kelly, who Ley says offered the wisdom and prayer to the ministry, and Ley, who offered the energy, the foundation was laid 20 years ago for The Franciscan Center. Kelly, who had a great love for the rosary and the chaplet of Divine Mercy, died last year. But through its years, Ley has taken on the “wisdom and prayer ministry” roles as directors Keith Burns, who directed the center for five years, and now Christie take The Franciscan Center “to the next level.”

Ley says she has a great love for St. Anthony, but whenever she read anything about the saint, she was always referred to St. Francis. Finally, she realized that if she did things as St. Francis did, she could expect the same results.

Christie estimates that The Franciscan Center has probably served over 1 million plus people and families.

Ley said when The Franciscan Center first opened, Father Groeschel sent her a letter with the following advice: “Do not have meetings” and the prayer, “Lord, use me, but do not consult me.”

Staffed by volunteers of many faiths, retirees and even young people, the spirit of St. Francis to assist the poor, and to do it with joy, is evident.
“We founded this, ultimately, to give opportunities for everyone to serve,” Ley said. “And that’s our culture — that students, senior citizens, men and women — we have something for every age (to serve at the center).” Students from the area Catholic high schools and elementary schools run drives and often volunteer at the center.