The smell of incense wafted through the air at the Cathedral of the Immaculate Conception in Fort Wayne on Sunday, Jan. 16 as 20 men took their final liturgical step toward ordination to the permanent diaconate, the installation of acolytes. Bishop Kevin C. Rhoades praised them for hearing and answering God’s call to service. If it be God’s will, these men will be ordained next spring.

Family and friends and especially the wives of the deacon candidates were in attendance alongside several other deacons from around the diocese. Father Stephen Colchin and Father Louis Fowoyo concelebrated. 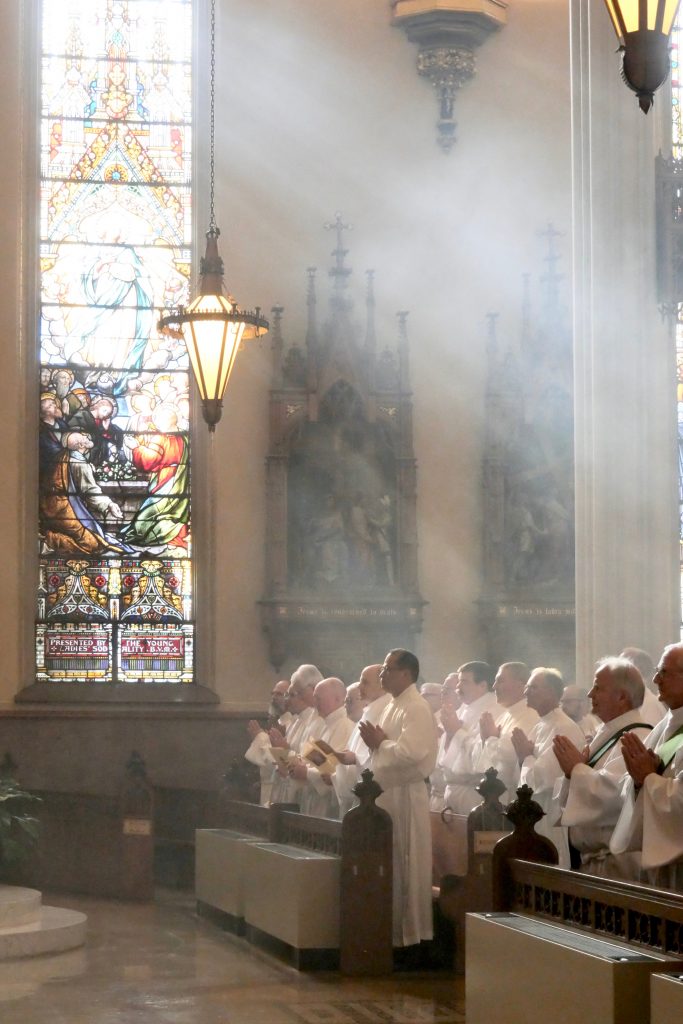 An acolyte can assist a priest at Mass and distribute holy Communion. These 20 men affirmed their call to service at a Mass celebrated by Bishop Rhoades.

An acolyte is one who assists at religious ceremonies, mainly at the Mass, and its roots lead back to the Greek word for “follower.” In his role as acolyte, each deacon candidate has been preparing to aid the priest in serving at the altar, distributing Communion at Mass and bringing the Sacrament to the homebound. Last year, these men were installed as lectors in the Church. After ordination, in addition to their other acts of service, the deacons will then be allowed to proclaim the Gospel and give homilies.

“It is a ministry of charity, especially to the weak and the sick; a ministry centered in the Holy Eucharist, the sacrament of Christ’s love,” Bishop Rhoades said in his homily. Addressing the deacon candidates, he continued: “Dear sons in Christ, as you bring the Eucharist to God’s people, you are also to carry His love to them through your care and concern for them. You will bring Jesus to them in your hands, but also in your hearts.”

Both the first reading and St. John’s Gospel speak of wedding feasts and wine; with Isaiah speaking of bountiful wine at the Messiah’s coming and the Gospel telling the familiar story of Christ’s first miracle, turning water into wine. “The abundance of wine Isaiah prophesied was miraculously produced at Cana,” the bishop continued. “So the miracle at Cana was a sign that Jesus was the Messiah.”

He went on to explain that this miracle also pointed to Jesus as the bridegroom, who, in Jewish tradition, provided the wine at wedding feasts. “By transforming the water into wine and assuming the role of the Jewish Bridegroom, Jesus is beginning to suggest that the prophecies of the divine bridegroom are being fulfilled in Him.”

Bishop Rhoades pointed out how this event foreshadowed the Last Supper. “Jesus gives the wine of salvation at the Last Supper, when the hour of His passion arrives. Jesus identifies the wine at the supper as his blood and calls it the blood of the new and eternal covenant. … He gives the new wine of salvation, His Blood, along with His Body, to the disciples and to the Church, His bride.

He concluded by saying that Jesus, “gives us the superabundant grace of His love and nourishes us to live in His love and to bring His love into the world. My sons about to be instituted as acolytes, may you always be devoted to Jesus in the Holy Eucharist. May you bring His love and grace to all whom you will serve as acolytes and as His future deacons!”

After the homily, each of the deacon candidates knelt before the bishop, who handed them a ciborium and asked if they were prepared to give a life of service to the Church. 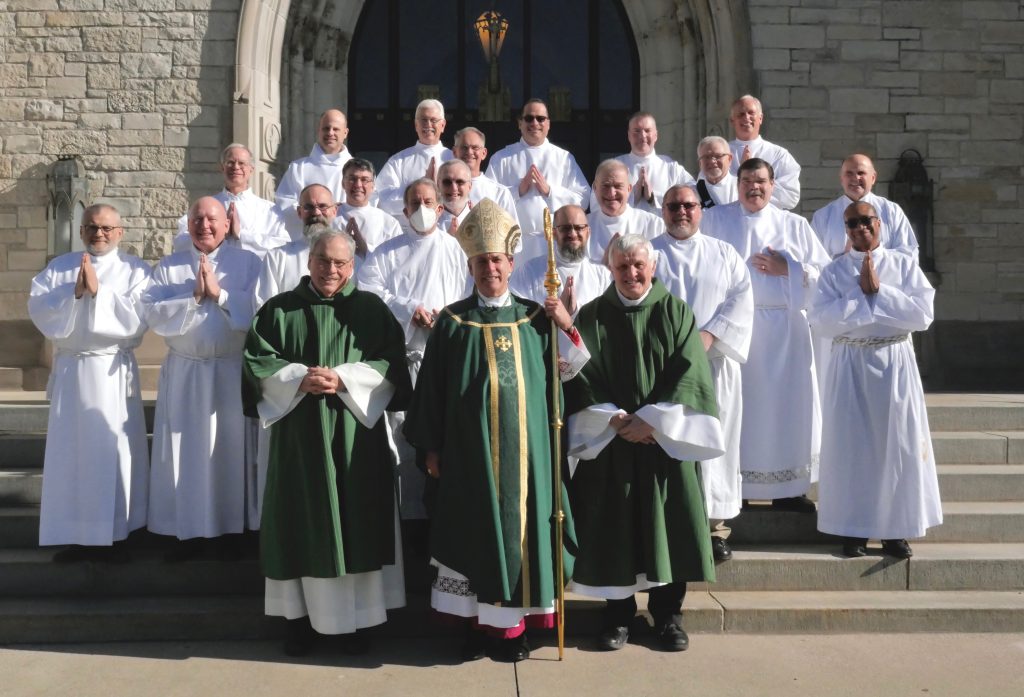 Photos by Jennifer Barton
Twenty men are currently in formation to become permanent deacons for the Diocese of Fort Wayne-South Bend. On Sunday, Jan. 16, they were installed as acolytes by Bishop Kevin C. Rhoades at the Cathedral of the Immaculate Conception in Fort Wayne and are on track for ordination next spring.

Four of the deacon candidates represent St. Pius X in Granger and others come from parishes across the diocese. One of these candidates, Burkins, hails from St. Dominic Parish in Bremen. He said he began his journey by looking into the possibility of becoming a permanent deacon when his children were younger, but he was advised to wait until they were older. “I never honestly thought too much about it until Father Fernando (Jiménez) approached me several years ago now and felt the call then, and had to say yes,” he remarked.

He feels “very blessed” to receive this calling and has grown in his faith over the last three years of the process. “The program’s amazing, I can’t say enough good things about it.”

Ortega, a member of St. Patrick Parish in Fort Wayne, was influenced by two other deacons who had previously gone through the training at his parish. “Just by looking at their example, they were a big inspiration to decide to join the program when the opportunity came.”

He stated that the training was “completely challenging, but it’s been a blessing. I always tell my wife that if today they decided I would have to be dropped from the program, I will still be grateful because all we have learned, all the things we have seen, and most important, all the people that we have been able to know.”

Both he and his wife, Flor, are originally from Mexico where they knew each other from their time in youth group. Flor stated that Max is always so excited after each class and he translates the lessons for her on their drive home from Warsaw so that she fully understands them. The two of them have been learning much about the faith together as he progresses in his training. “At some point, I said, ‘Well, I’ve been Catholic all my life, what else can I know?’” he said with a laugh. “Now I know that these four years are not going to be enough, we have to keep learning because the richness of the faith is incredible.”

He also said the time in formation has passed quickly and he is looking forward to next year’s ordination ceremony.